Geoengineering And The Most Dangerous False Dichotomy 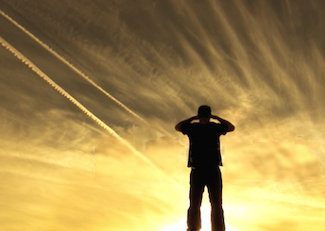 We all know despair.  We all know joy.  We all have been told to believe that these two states of mind are mutually exclusive.

This is a lie.  Unfortunately, it's one of the most prevalent and malignant of the many lies we get fed on a daily basis.

Of all the false dichotomies that we confront, and they are legion, the one that opposes hope and happiness to doom and despair is the most damaging to the vigour and longevity of a movement like this, the vital effort to stop geoengineering.  Nowhere is burnout such a constant threat, as in a situation where one knows that even if one prevails, the outcome will still be negative.  Because, as we all know, even after we have put an end to the toxic spraying and ionospheric heating and all, we will be left with ongoing catastrophic warming and ecosystem collapse and the Sixth Great Extinction.  For starters.

Some people (Guy McPherson being the most prominent example I know of) seem to believe that if, or since, we're all going to die, die, die! we should turn our back on everything, and focus entirely on immediate pleasures.  They call this "living well."  They have decided beforehand that the struggle is for naught, and therefore not worth wasting energy on.  They don't, of course, know what may happen to the planet in the long run, any more than we do.  Rather than risking burnout, they have chosen to cop out.

Contrarily, we who are gathered here all know that the fight is "worth it" – but what is it worth?  The answer to that question isn't as obvious or as univocal as it may seem.  Of course it is worth fighting to spare any life forms hardy and adaptive enough to survive the changes Earth is undergoing, whether humans number among those or not.  Of course it is worth doing the right thing, always, regardless of guaranteed – or even possible – success.  Just knowing that one is doing the right thing is uplifting, restorative to the spirit (however one defines that vague concept), and thus its own reward.

The fact that many people miss, in the meantime, is that one doesn't have to live in utter despair just because the situation is desperate.  As Dane Wigington so frequently exhorts us to remember, the one thing we truly own, the one thing no one else can touch, is our free will.  If others control us, it's because we gave them permission; it was an act of volition on our part.  Unless one has been genuinely hypnotized, one's will is intact – and people with a strong will cannot be hypnotized.

One of my favorite comic strips, from my long-ago childhood, shows the 5 members of the same family each thinking his or her thoughts at the start of a new day.  The first four are drooping, depressed, grousing about another day of having to face traffic, another day sitting through work or school, another day of chores and meaningless, soul-numbing activities.  The youngest is sitting in her crib smiling like a sunbeam, thinking to herself simply, "Another day!"

The salient point is that all five have awakened to the very same day.  The attitude they adopt is their own choice, despite the difference in their circumstances (how many adults would be delighted at the prospect of sitting in a crib for hours, being utterly dependent on others for food, clean diapers, and mobility?)

When I first learned about the geoengineering threat to the planet's future, I was hit pretty hard by a temporary depression.  At first all I could do was cry; shortly after, I was tempted to adopt the Guy response: what the hell?  We're all going to die.  But let's face it: we are all going to die.  With or without geoengineering, with or without global warming, or Fukushimas, or wars.  Whether those realities loom large before us or not, we still awaken to each new day with the attitude of our choice.

How does this relate to burnout?  I would argue that by adopting the attitude of the young child, we can enjoy life, in spite of conditions around us.  By doing so, even though we are aware of our despair, anger, frustration, and worries, we can maintain the strength to keep going.  Even if humans are facing extinction (as we are, whether in the near term or not), does that mean we have no choice but to succumb to total despair?  Does it mean we have to ignore the many reasons to appreciate life?  Those billions of humans facing extinction were all born subject to the condition that they would one day die – that's the harsh reality for all living things.  Immortality, at least in the corporal, earth-bound form, is unattainable.  For my part, I am unconvinced that there is an afterlife, and to me that makes the life I have all the more magical, wonderful, and fulfilling.  But that's just my personal belief.

Regardless of what happens after death, while alive we have free will, and we can use it to make every day meaningful.  Instead of bemoaning the fact that "I'm going to die," one can choose to acknowledge that "I'm still alive."   Because any of us could have died long ago; it's in the cards for everyone, period.  Against the odds, perhaps, we're not dead yet (to steal the best line ever from Monty Python).  We are still alive to carry on the fight, and still alive to love, laugh, and appreciate the beauty around us.  As Max Ehrmann wrote in the brilliantly insightful prose poem Desiderata, "With all its sham, drudgery and broken dreams, it is still a beautiful world."

How did any of us get so lucky as to be born?  We didn't earn that right; it was a gift.  Whatever the source, be it God or Spirit or the Void, we are here.  If for no other reason than that we were fortunate enough to be placed here, we have a responsibility to do whatever we can to protect the planet that supports us.  But equally importantly, we have the right to enjoy it in the meantime.  We have the right and the responsibility, in other words to live well.

Don't believe anyone who tells you that desperate times require choosing between denial-based happiness and despair.  Life is better when one is fully awake to it, the good and the bad, and fully participating.  This is one instance where you can have your cake and eat it, too.

I'm not trying to go all New-Agey here – I absolutely reject the notion that absolutely everything that happens in life is a gift.  I cannot see Morgellon's, for instance, as an opportunity; to me it is a crime against humanity (like the Tuskegee experiments on a global scale).  I think that the so-called Serenity Prayer says it best: Grant me the serenity to accept the things I cannot change, the courage to change the things I can, and the wisdom to know the difference.  Death is one of those things we just can't change, but how we conduct ourselves in any given circumstances is entirely in our hands.

10 Responses to Geoengineering And The Most Dangerous False Dichotomy