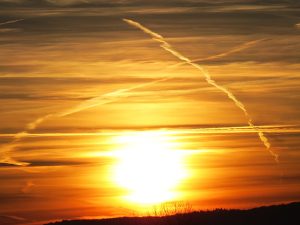 What The Science Says:
Peer-reviewed research, physics, and math all tell us that a grand solar minimum would have no more than a 0.3°C cooling effect, barely enough to put a dent in human-caused global warming.

"The sun is acting bizarrely and scientists have no idea why. Solar activity is in gradual decline, a change from the norm which in the past triggered a 300-year-long mini ice age" (Dick Ahlstrom, The Irish Times)

Articles in the Danish newspaper Jyllands-Posten (translation available here) and in the Irish Times both ran headlines claiming that another grand solar minimum could potentially trigger an "ice age" or "mini ice age" this century. These articles actually refer to the Little Ice Age (LIA) – a period about 500 to 150 years ago when global surface temperatures were about 1°C colder than they are today.

Thus a grand solar minimum would have to cause about 1°C cooling, plus it would have to offset the continued human-caused global warming between 1 and 5°C by 2100, depending on how our greenhouse gas emissions change over the next century.

We're fortunate that the amount of solar radiation reaching the Earth's surface is very stable. Climate contrarians will often ask if we'd prefer if the planet were warming or cooling, suggesting that global warming is a good thing because at least the planet isn't getting colder. This is a false dichotomy – an ideal climate is a stable one. The relatively stable climate over the past 10,000 years has allowed establishment of human civilization, by making it possible to create large stationary agricultural farms because we could rely on stable weather patterns.

What difference would a grand solar minimum make in the amount of solar energy reaching us?  Relative to current levels, the Dalton Minimum represents a 0.08% decrease, and the Maunder Minimum represents a 0.25% decline in solar radiation at the Earth's surface.  That's how stable solar activity is.  That's also why we're playing with fire by increasing the greenhouse effect so much and so quickly.  We're threatening the stability of the climate that has been so favorable to our development.

There have been several studies in recent years using climate models to see what impact another grand solar minimum would have on global surface temperatures, since solar research suggests it's possible we could be due for another extended minimum.  Feulner & Rahmstorf (2010) (PDF available here) estimated that another solar minimum equivalent to the Dalton and Maunder minima would cause 0.09°C and 0.26°C cooling, respectively. 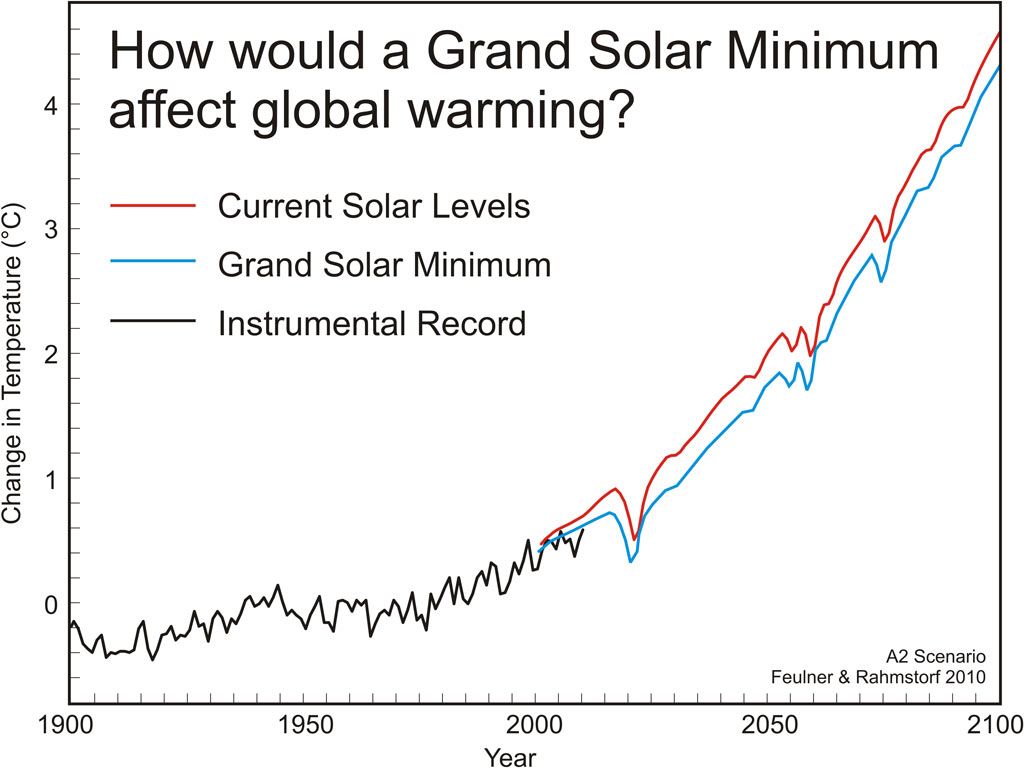 Jones et al. (2012) (PDF available here), Anet et al. (2013), and Meehl et al. (2013) (PDF available here arrived at nearly identical results, with cooling from a grand solar minimum causing no more than 0.3°C cooling over the 21st century.  Meehl et al. also point out that as soon as solar activity began to rise again, that cooling would be offset by solar warming.  This is a key point, because a grand solar minimum would not be a permanent change.  These minima last for a few decades, but eventually solar activity rises once again.  Thus any cooling caused by a solar minimum would only be temporary.

The cooling effect of a grand solar minimum can also be estimated very easily without the aid of climate models.  To see the calculation, check the Intermediate leve of this myth rebuttal.

Human Influence on Climate Change is Bigger than the Sun's

The bottom line is that the sun and the amount of solar radiation reaching Earth are very stable. Even during the Maunder and Dalton grand solar minima, global cooling was relatively small – smaller than the amount of global warming caused by human greenhouse gas emissions over the past century.

A new grand solar minimum would not trigger another LIA; in fact, the maximum 0.3°C cooling would barely make a dent in the human-caused global warming over the next century, likely between 1 and 5°C, depending on how much we manage to reduce our fossil fuel consumption and greenhouse gas emissions. While this is equivalent to about a decade's worth of human-caused warming, it's also important to bear in mind that any solar cooling would only be temporary, until the end of the solar minimum.

The science is quite clear that the human influence on climate change has become bigger than the sun's.