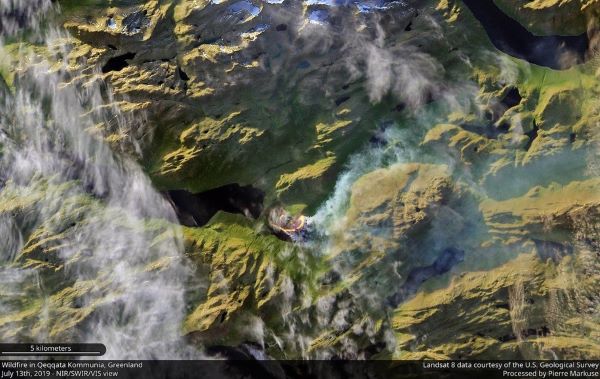 Throughout the High Arctic of Canada, Alaska, and Siberia unprecedented wildfires are raging. Thanks to stunning satellite images from NASA and the EU of the burning Arctic, this crisis has made international headlines.

MSNBC discussed these fires yesterday and today I saw CNN, give this nightmare the coverage that it deserves even though it was just a fraction of the coverage given to Donald Trump's daily scandals and repulsive distractions.

Climate Change News shares the situation unfolding in the Arctic:

Under the choking black smoke from the bog and forest fires in Siberia and Alaska, it can feel like the Earth itself is burning.  The normally moist, black organic peat soil and lush forests have been drying, and when they catch fire, they burn relentlessly.

Global warming has been thawing tundra and drying vast stretches of the far-northern boreal forests, and it also has spurred more thunderstorms with lightning, which triggered many of the fires burning in Alaska this year, said Brian Brettschneider, a climate scientist with the International Arctic Research Center who closely tracks Alaskan and Arctic extreme weather.