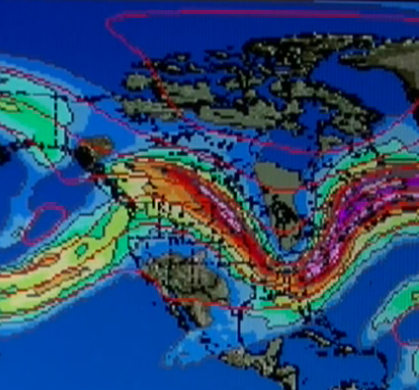 Share1.0K
Tweet
+1
Share
Pin3
1.0K Shares
Radical weather and temperature extremes are rapidly increasing in intensity and frequency. The geoengineers are continuing to ramp up on their forcing of the climate processes even as the whole climate system frays apart. In order to perpetuate public confusion and division in regard to the true state of the global climate, the power structure must create and re-create the "polar vortex" cool-downs which mainstream media then sensationalizes. Some regions in the eastern US that were just buried under the last "polar vortex"  hit record high temperatures today. Those same places are going to go back to snow by Wednesday. Though it recently snowed in the southern US near the Gulf coast, on November 24 warm rains were falling far into Canada almost all the way into Labrador. It's balmy in Alaska as temperatures are still hovering at or near record highs in places (which mainstream media tends not to report). There is also the following much more dire fact that should be contemplated,  the power structure is preparing for societal collapse. They will do everything possible to hide the true magnitude of damage done to the biosphere until the last possible moment. Climate engineering is a tool of deception that has very successfully confused and divided populations. Those in power and their media have created the illusion of a "cold world" by orchestrating isolated engineered weather events. If the public truly understood the gravity and immediacy of the climate unraveling (much of it caused and fueled by the climate engineering itself), there would already be global panic. The agendas being carried out are complex, this should always be considered and kept in mind.
Dane Wigington
geoengineeringwatch.org

8 Responses to Climate Engineering And The Polar Vortex Conveyor