Climate Engineering, Is It Working? 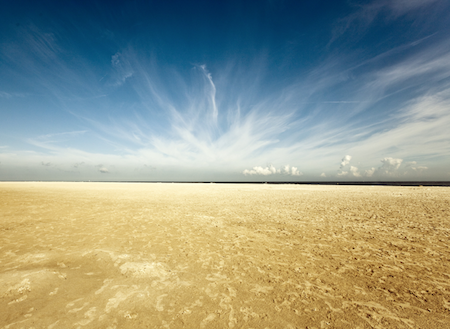 Is climate engineering cooling down our planet? Overall, absolutely not. If you live in the eastern half of the North American Continent, you may be very skeptical about the fact that our planet is warming at unprecedented speed, but it is important to remember that the eastern half of the lower US 48 states is only 1/2 of 1 % of the Earth’s surface area (.5%). Thats not much, and the world is much bigger. In addition, the massive all out climate engineering assault is radically stratifying the atmosphere which means that the geoengineers only have to create “cool” layer of air that sits on the surface (cold air is much more dense so it settles). Since the atmosphere is not mixing as it historically did, that cold layer creates much confusion and many “cold” headlines which is exactly what the climate engineers and the power structure wants. Completely engineered chemically ice nucleated storms help to create the cold layer just described. The climate engineers are cooling some regions down at the expense of completely contaminating the entire surface of the planet and worsening the overall warming.

The NASA surface temperature map below shows what has been the general pattern for the last 18 months. The map shows “departure from normal high temperatures” . The engineered cool-downs in the eastern half of the North American continent are all too visible, so is the excessive heat in much of the rest of the world with few exceptions. 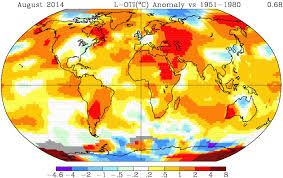 The NOAA map below has been just as typical for a very long time. The Western US fries while the Eastern US gets constant toxic engineered cool-downs. 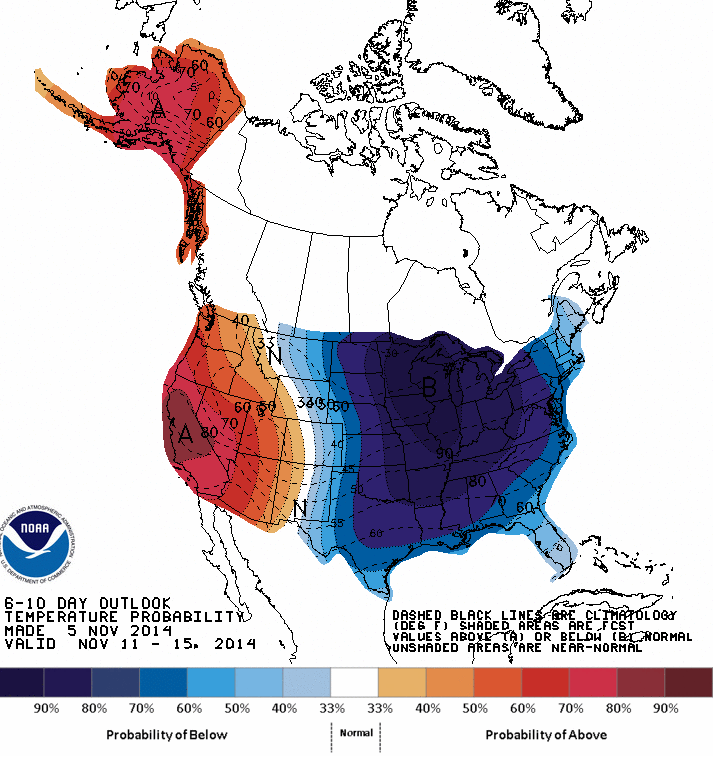 The color gradients indicate as much as 2 or 3 degrees temperature variance for each shade of color above or below “normal”. The “bullseye” in California indicates temperatures may be as much as 20 degrees above “normal” in the West, while the East may see temperatures 20 degrees or more below normal. The climate engineers have for the most part kept the country locked in this pattern for a very long time. For the moment this remains our “scheduled” weather.

All must learn to look past the bombardment of false data that is flooding the media and consider the facts on the ground. Forests around the globe are burning down at rates many times higher than the historical norms. Formerly frozen methane hydrate deposits are thawing all over the globe due to rapidly warming ocean temperatures. Diligent investigation is essential if accurate conclusions are to be formed. If the cause of exposing and stopping climate engineering is to gain traction, credibility is required. The article below did not take October 2014 into account, October was yet another record breaking month on planet Earth, the warmest ever recorded. Credibility means everything, the planet is rapidly warming and climate engineering is helping to fuel the fire as it also poisons the entire web of life. Help us stop the geoengineering nightmare, make your voice heard.
DW
geoengineeringwatch.org 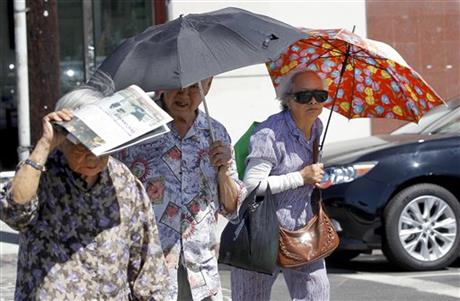 FILE – This Oct. 2, 2014, file photo shows women shading themselves from the hot sun in the Chinatown section of downtown Los Angeles. It sounds like a broken record, but last month again set a new mark for global heat. And meteorologists say Earth is now on pace to tie the hottest year ever recorded, or more likely break it. (AP Photo/ Nick Ut, File)

WASHINGTON (AP) — Earth is on pace to tie or even break the mark for the hottest year on record, federal meteorologists say.

That’s because global heat records have kept falling in 2014, with September the latest example.

The National Oceanic and Atmospheric Administration announced Monday that last month the globe averaged 60.3 degrees Fahrenheit (15.72 degrees Celsius). That was the hottest September in 135 years of record keeping.

It was the fourth monthly record set this year, along with May, June and August.

NASA, which measures temperatures slightly differently, had already determined that September was record-warm.

The first nine months of 2014 have a global average temperature of 58.72 degrees (14.78 degrees Celsius), tying with 1998 for the warmest first nine months on record, according to NOAA’s National Climatic Data Center in Asheville, N.C.

The reason involves El Nino, a warming of the tropical Pacific Ocean that affects weather worldwide. In 1998, the year started off super-hot because of an El Nino. But then that El Nino disappeared and temperatures moderated slightly toward the end of the year.

This year has no El Nino yet, but forecasts for the rest of the year show a strong chance that one will show up, and that weather will be warmer than normal, Blunden said.

“This is one of many indicators that climate change has not stopped and that it continues to be one of the most important issues facing humanity,” said University of Illinois climate scientist Donald Wuebbles.

Some people, mostly non-scientists, have been claiming that the world has not warmed in 18 years, but “no one’s told the globe that,” Blunden said. She said NOAA records show no pause in warming.

The record-breaking heat goes back to the end of last year — November 2013 broke a record. So the 12 months from October 2013 to September 2014 are the hottest 12-month period on record, Blunden said. Earth hasn’t set a monthly record for cold since December 1916, but all monthly heat record have been set after 1997.

The U.S. as a whole was warmer than normal for September, but the month was only the 25th warmest on record.

While parts of the U.S. Midwest, Russia and central Africa were slightly cool in September, it was especially hotter than normal in the U.S. West, Australia, Europe, northwestern Africa, central South America and parts of Asia. California and Nevada set records for the hottest September.

If Earth sets a record for heat in 2014 it probably won’t last, said Jeff Masters, meteorology director for the private firm Weather Underground. If there is an El Nino, Masters said, “next year could well bring Earth’s hottest year on record, accompanied by unprecedented regional heat waves and droughts.”

2 Responses to Climate Engineering, Is It Working?