Global Geoengineering – The Ever Changing Experiment 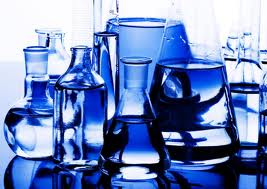 It is a challenge to predict the outcome of experiments that are being constantly altered. The saturation of the atmosphere with particles has specific and well documented effects. It forces a complete disruption of the hydrological cycle with a tendency toward CAUSING DROUGHT overall.

Numerous geoengineering patents state the expressed goal of creating artificial cloud cover by spraying nano particles of aluminum, barium, and other heavy metals into the stratosphere and/or troposphere.The ongoing saturation of the atmosphere with these moisture absorbing nano particles (desiccants) has created protracted drought in many regions around the globe. Blocking a percentage of the suns’ direct rays (GLOBAL DIMMING) is an expressed goal of the geoengineers.  However, if the sprayed materials change, if the size of the particulates change, if the atmosphere becomes too overly saturated with moisture, or if there is a temporary reduction in the spraying, the outcome changes. Regions that have been experiencing years of protracted drought, can flip to constant deluge or vice versa. Nothing can be set in stone in regard to the ever changing experiment of global geoengineering. Currently, the WESTERN US IS LOCKED IN PROTRACTED DROUGHT while the much of the eastern US is receiving record rain. Moisture that should have fallen in the west is, in effect, migrated east by constant spraying of geoengineering particulates. Much of this moisture eventually comes down in the eastern US. Some of the areas in the east that are now receiving record rain had record drought only a year ago. Europe is also experiencing “weather whiplash”, the DROUGHT AND FLOOD SCENARIO.

Though many still wish to argue the cause, the planet is getting warmer, and fast. As the planet warms, the atmosphere carries more water vapor. No matter how strong the drought causing effects of atmospheric nano particle particulates, DELUGES WILL INCREASE in conjunction with a warmer planet.

The effect of the constant spraying of the atmosphere was truly REVEALED IN THE DAYS AFTER 9/11. The grounding of air traffic allowed a very unique opportunity to document profound atmospheric changes. There was an immediate increase in the clarity of the skies over the continental US, the daytime high temperatures rose significantly, and the nightime lows dropped significantly. This is exactly what would be expected with the temporary halting of the global geoengineering programs over our air space.

What Do They Have “Scheduled” For Our Weather?

The Global power structure owned “Weather Channel” has just released the long term forecast for the next three months (summer 2013). What do they have planned for the continental US? More of the same, or worse. 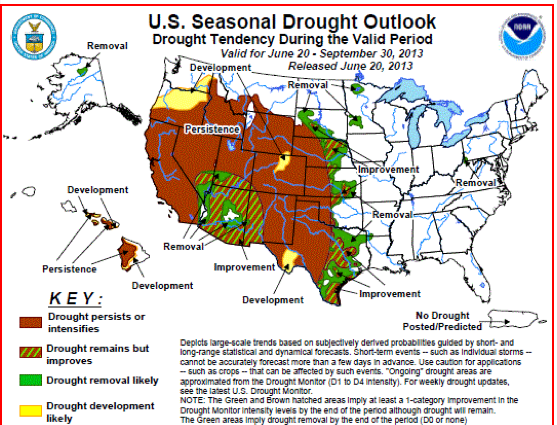 Blanket spraying of the Eastern Pacific off of the US west coast continues day in and day out. Any moisture that manages to make it over land gets heavily sprayed, greatly reducing the potential of precipitation in the Western US. If the constant spraying continues, protracted drought will only worsen in the west and the deluges in other parts of the Eastern US will continue. In the last 7 years, the exact location in Northern California where I live is almost 200 inches short of the precipitation that should have been received over this time period based on historical averages. The historical average in my location is 69 inches annually, we have received an average of about 40 inches a year during the last 7 years. The decrease in rainfall has correlated closely with an increase in the intensity and frequency of the aircraft spraying of our skies and off of the US west coast in the pacific.

Geoengineering is truly wreaking havoc with the earths climate systems, decimating the atmosphere, and saturating the entire surface of the planet with toxic metals and chemicals. Though the whole spectrum of human activity has done great damage to the environment and climate system, global geoengineering is the elephant in the room which is doing the most damage of all. Scientists and environmentalists seem all too willing to ignore or deny geoengineering, and the public at large has been blind to it due to constant media and societal conditioning. Its high time to break the mold of denial on this most critical issue, all is at stake.

WESTERN US LOCKED IN PROTRACTED DROUGHT

REVEALED IN THE DAYS AFTER 911

7 Responses to Global Geoengineering – The Ever Changing Experiment