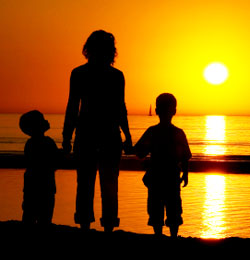 Sea level rise is accelerating. The number of large wildfires is growing. Dangerous heat waves are becoming more common. Extreme storm events are increasing in many areas. More severe droughts are occurring in others.

These are just some of the consequences of global warming, which are already having significant and harmful effects on our health, our environment, and our communities.

Unless we take immediate action to address global warming, these consequences will continue to intensify, grow ever more costly, and increasingly affect the entire planet — including you, your community, and your family.

The planet’s temperature is rising. The trend is clear and unmistakable.

Every one of the past 37 years has been warmer than the 20th century average. The 12 warmest years on record have all occurred since 1998. 2012 was the hottest year ever recorded for the contiguous United States.

Globally, the average surface temperature has increased more than one degree Fahrenheit since the late 1800s. Most of that increase has occurred over just the past three decades.

We are the cause.

We are overloading our atmosphere with carbon dioxide, which traps heat and steadily drives up the planet’s temperature. Where does all this carbon come from? The fossil fuels we burn for energy — coal, natural gas, and oil — plus the loss of forests due to deforestation, especially in the tropics.

The scientific evidence is clear.

Within the scientific community, there is no debate: An overwhelming majority of climate scientists agree that global warming is happening and that human activity is the primary cause.

This broad consensus — and the extensive scientific evidence that supports it — is often downplayed or distorted by a small but vocal minority of special interests that have a vested interest in delaying action on climate change.

We have a choice.

We can act now to reduce our carbon emissions, slow the pace of global warming, and pass on a safer, healthier world to our children. Or we can choose to do nothing, continue pumping massive amounts of carbon into an already overloaded atmosphere, and suffer the increasingly costly consequences.

At UCS, we believe the choice is clear: We must take steps now to reduce our global warming emissions.

Together we can tackle global warming.

We have the practical solutions and technologies at hand to substantially reduce our emissions, create a clean energy economy, and establish the United States as a global leader in innovation.

To accomplish it, we must:

Working together, we can do it — and you can help make it happen. Take action today!

One Response to Global Warming: Confronting the Realities of Climate Change