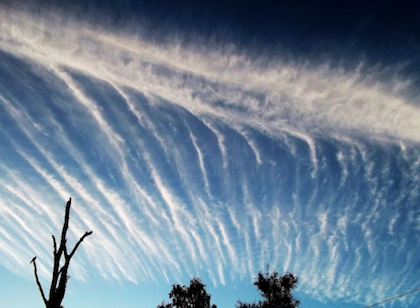 The stated purpose of many geoengineering programs is to increase Earth’s reflectivity, its “albedo”. The problems associated with this utterly insane attempt to modify the planet’s life support systems are beyond comprehension. In addition, all available evidence indicates there are many aspects and objectives connected to the atmospheric spraying, its much more than just “solar radiation management”. Biosphere decimation is the result of geoengineering, that much is crystal clear.  My gratitude to David Tulis for yet another excellent article.
Dane Wigington
geoengineeringwatch.org

An interruption in government service as a sky stripe ends abruptly, as seen from the eaves of my residence in Soddy-Daisy, Tenn.

This little fart of a trail, no more than a few hundred feet long, spills sideways into a fresh cloud. Mere condensation, d’you suppose?

The operative theory of the U.S. military’s sky striping program is simple. Serve the national fad of global warming by an active — albeit secret — program to cool the planet ahead of the rising clamor. How? By creating a perpetual covering of white between that newly discovered source of evil — the sun — and the surface of the earth.

The more white brilliance that hangs over forests, rivers and cities of Southeast Tennessee, the more successful the program will appear to the staff people who run it. Consent for the program among these thousands of employees is essential. Military employees are those to whom an appeal to integrity is known to work, whose sense of duty keeps them going on tedious cloud-making runs over vast ocean horizon or dotted cities of the fruited American plain.

Sky striping’s success is that it keeps cities such as Chattanooga and desert tracts horizons in, say, Shasta County, Calif., under a regular haze. Like someone tossing a goblet of champagne off a balcony that billows into a haze, a smartly devised cocktail of metallic microflakes gassed into the sky’s upper reaches dims the sun. And the planet is cooled — at least if you follow one set of theories. Sky tattooing increases the planet’s albedo, or that part of solar energy deflected from the earth’s back into outer space.

Academicians theorize about government eventually creating a program to smoke up the atmosphere, and bring to the planet what they calculate as its deliverance. A dim sun is to them Plan B, whereas Plan A is cooling the surface wracked by the alleged evils of automotive and industrial pollution. Plan A is environmental controls, and Plan B is already in bearded legacy status, though people are unaware of this self-propelled salvation of the human race.

Parallel contrails hide above natural (presumably) cloud formations at the Highway 153 and 27 interchange in North Chattanooga.

Uncle Sam’s stripes pour nanoparticulate aluminum into the air, raising the albedo or reflectivity of the upper atmosphere. Why keep such brilliant thinking secret?

A jet trail disperses over an office in Hixson, a northern burb of Chattanooga.

Oops — ran out. A strand of official pollution poured from a jet suddenly cuts off over a house in Knoxville, Tenn. (Photo Marla Stair-Wood, Tennessee Skywatch on Facebook)

If global warming is the enemy, Tuesday’s heavy activity over the skies of Chattanooga is part of that salvific operation. Jets at high altitude overfly a grand display closer to the ground of cumulus clouds that I innocently take as coming from the hand of God through the glory of nature. Over my house jets swerp at dawn, laying trails that morph into clouds. One chunk of emitted trail, no more than a few hundred feet long, dissolves into a haze and appears to be feeding off it, like scum oozing off a worm. Another white tattoo line is simply cut off in mid-squirt — a sign either of discontinuity of service, or an empty tank.

Not all jets this morning make stripes that stay. One jet leaves a short tail that dissolves after it, its demise a vague dot moving along behind the fleck of aluminum wing and body. Perhaps just a regular passenger plane with condensation.

You ask what do I suppose is being laid down to become cloud? Well, an interview Robert Sacci, a chemist and Ringgold, Ga., resident, suggests it could readily be what county data suggests — aluminum, strontium and barium particles at what regulators call a “fine” size (vs. coarse). These particles are 2.5 microns and smaller, measured on the nanometric scale. In our air have descended persistent traces of aluminum, strontium and barium, for which no health standard is said to exist, according to Bob Colby. Are these trails mere water vapor with a hint of frost at those chilly altitudes? No. Persistent contrails — popularly called chemtrails — make clouds and cloud systems; they are engineered by a largely unpublished science shielded from view by a nearly full-body leather belt of national security statute and regulation. These trails, as we can understand, serve public policy by increasing the albedo of the upper atmosphere. Their use in warfare is outlawed by a 1970s treaty, but cloud-making projects serve a compelling state interests and the purposes of climatological tests and exercises favored by such enthusiasts as David Keith, of Harvard University scientist.

A danger that is forbidden to be detected by federal regulation is inhalation of these fine particles, and they are regularly deposited upon vegetables grown in the area and sold at St. Alban’s and other farmer’s markets and part of Bi-Lo’s buy-from-a-local-farmer program.

Local economy. National economy. Natural sky. Manufactured sky. One close to the earth, the other above it, superior, its brilliance of a different order, its effects held as having no account, either among journalists such as Judy Walton of the local newspaper or weather professionals such as Paul Barys of Channel 3 Eyewitness News Storm Alert Team, a meteorologist since 1985.

A remarkable hearing was held July 15 by the Shasta County, Calif., board of supervisors on stratospheric aerosol geoengineering, or SAG. To packed chamber the elected officials cordially heard a string of witnesses, including scientists, pilots and environmentalists reporting their views about government chemtrailing over the county.

The public officials exhibited a service-minded respect of their witnesses. “Is it because it is a public health hazard— is that one of your No. 1 concerns that this must be disclosed?” a board member asked.

“That is our request to the board,” Dane Wigington, a 10-year researcher in the topic, said after a 10-minute talk. “That is why these programs can go on and on and on. Because media will not cover it until the actual effects are made known, and this contamination issue again is absolutely verifiable. Same with the [ultraviolet rays] issue, we can meter it for you – we have state of the art meters. *** So, yes, that is the request. This contamination is a public health hazard.”

A supervisor asked a witness how the county would test for nanoparticles. The witness said it would have to obtain filtration equipment (2:53), and another supervisor said she would want to make sure that testing for chemtrail trash would be replicable. Another supervisor scolded a congressman for not having a representative at the hearing, even though he claimed “to be one of us.” “Let them listen to the passion that came out of this meeting today,” he said of those who would receive DVDs of the hearing.

The supervisors decided to gather information from the park, compile information from the hearing, and send it to the California EPA, the state air board, the EPA and other agencies in a “succinct letter” plus a disk containing the day’s hearing. At the end it heard from Richard Simon, director from the Shasta County Air Quality Management District, indicating the panel lacks authority to act.

“This is an uphill battle,” a sympathetic board member said. But he said he liked all the witnesses who spoke respectfully about their evidence and their concerns. “No one is going to help you if you spit in their eye and then ask for help. I do appreciate that you made that effort.”

The motion to demand an accounting from Uncle Sam passed unanimously to uproarious applause from an audience that contained people, according to one official, from “around the world.”

Skies such as these are a global phenomenon, and should raise health concerns among people who live under such skies. (Photo Facebook)

This photo shows how metals in nanoparticulate form are shed from a jet-laid sky stripe. Location not identified. (Photo Facebook)

This photo of a scene in Rome shows an actively geoengineered sky that many people disregard.

Sky hacking is the method by which national governments serve the global warming elite. Locale not identified. (Photo Facebook)

A miraculous sky over Lancaster, Calif., reveals jet trails and the regular blotting action against the sun. (Photo Facebook)