Methane Meltdown And The Geoengineered Attempt To Hide It 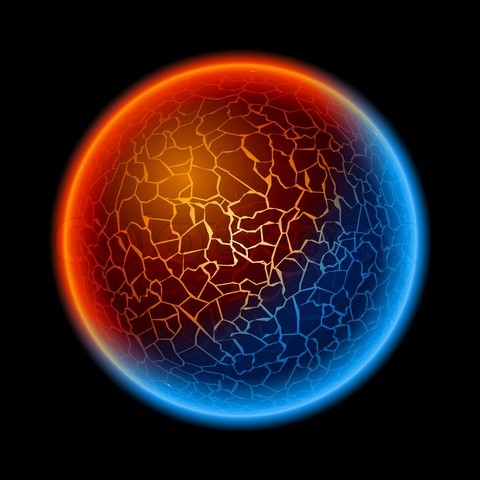 The latest engineered cool-down is hitting the East today, but how cold is it really? 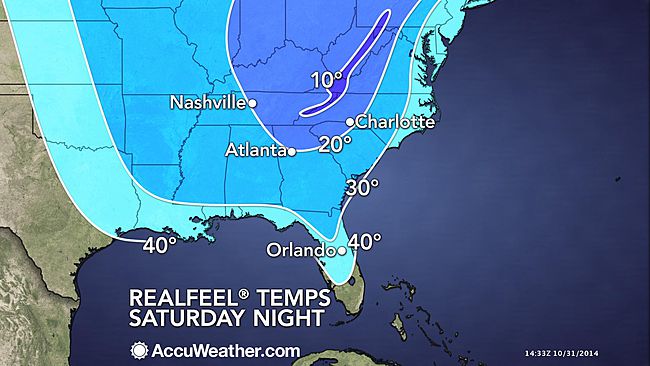 What are “real feel” temps? Real feel” is NOT the actual temperature. Why is “AccuWeather” using maps like the one above as if the temperatures shown are the actual temperatures? Because it adds to the illusion that it’s colder than it really is. On the map above it appears that Atlanta, GA may be in the 20 degree range on Friday, October 31st, 2014, when the actual forecast is for a high near 70F and a low near 40F.

So how warm is the rest of the country, and why don’t mainstream weather sources say anything about it? 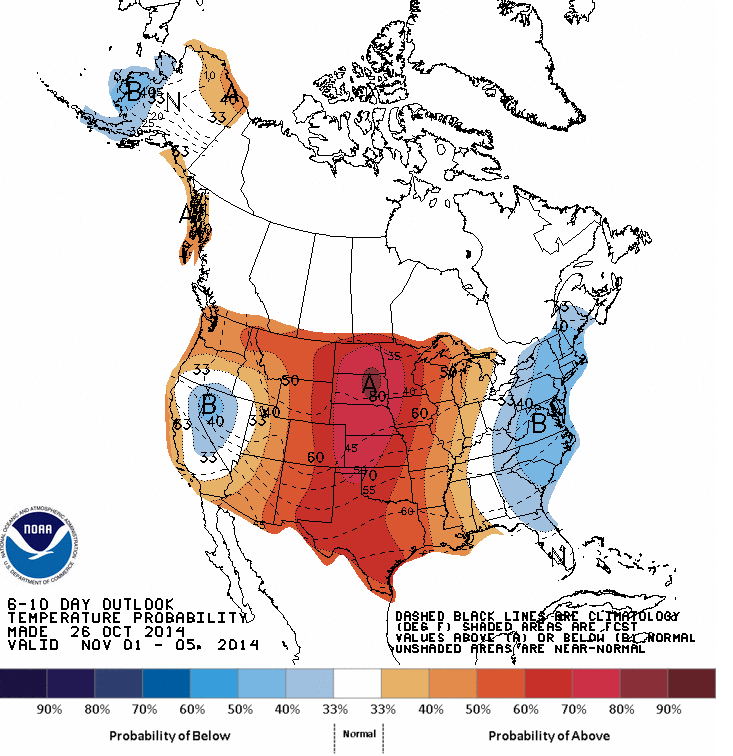 The map above shows a scenario of temperature extremes that is historically unprecedented. The center of the country is hovering in record high temperature ranges 20 degrees above normal while the engineered cool down in the East produces below average temperatures. The “bullseye” cool zone in the West is also worth noting.

So what is the bottom line? The planet is not just warming, it is in total meltdown. This is not about Al Gore, but about facts. If we are to gain credibility in the fight to expose and stop climate engineering, we must stand on facts, not ideology and emotion. Though the climate engineers can temporarily and toxically cool-down large regions, it comes at the cost of a much worsened overall warming. Global geoengineering is making an already bad climate unravelling exponentially worse overall. There is a great deal of denial on all sides of the fence in this equation. The climate science community is completely denying the reality of geoengineering, and much of the anti-geoengineering community is completely denying the rapid warming that is occurring which is to some degree being masked by climate engineering and corporate media spin. DO YOUR OWN OBJECTIVE RESEARCH, A HEADLINE IS NOT A FACT. Investigate data from the front lines.

So how bad is the climate situation likely to get? If climate engineering is not stopped, and if the human race does not completely change direction, the horizon is beyond bleak. The article below should be examined, global methane release is a major part of what the climate engineers and their corporate controlled media is trying to hide.Climate engineering is making the methane scenario worse, not better. All need to make their voices heard in the battle to wake the masses to the challenges we collectively face.
Dane Wigington
geoengineeringwatch.org

Imagine, for a moment, the darkened and newly liberated ocean surface waters of the Kara, Laptev, and East Siberian Seas of the early 21st Century Anthropocene Summer.

Where white, reflective ice existed before, now only dark blue heat-absorbing ocean water remains. During summer time, these newly ice-free waters absorb a far greater portion of the sun’s energy as it contacts the ocean surface. This higher heat absorption rate is enough to push local sea surface temperature anomalies into the range of 4-7 C above average.

Some of the excess heat penetrates deep into the water column — telegraphing abnormal warmth to as far as 50 meters below the surface. The extra heat is enough to contact near-shore and shallow water deposits of frozen methane on the sea-bed. These deposits — weakened during the long warmth of the Holocene — are now delivered a dose of heat they haven’t experienced in hundreds of thousands or perhaps millions of years. Some of these deposits weaken, releasing a portion of their methane stores into the surrounding oceans which, in turn, disgorges a fraction of this load into the atmosphere.

The rate of release intensifies throughout summer. But during the Arctic Fall, it reaches a peak. Then, as sea ice begins to re-form over the surface waters, a kind of temperature inversion wedge develops. The surface cools and the ice solidifies — forming an insulating blanket, trapping heat. The insulating layer, in turn, pushes the anomalously hot mid level waters toward the bottom. This process delivers a final and powerful dose of heat to the Arctic Ocean bottom water and sea bed.

Methane release rates spike as the methane flooding up from the sea bed squeezes out through cracks in the newly forming ice or bubbles up through open waters just beyond the ice edge.

During recent years, a troubling methane over-burden has been observed in the atmosphere above these regions during the months of September through November. Dr. Leonid Yurganov — a researcher at the University of Maryland — has been using the IASI sensor to record these events. Last year, he developed this map of September through November methane readings for the 2009-2012 period:

Highest lower troposphere global atmospheric methane readings were found in the region of the East Siberian, Laptev and Kara seas during September through November of 2009 through 2012. Data provided by IASI. Image source: Dr. Leonid Yerganov via Arctic News.

The readings above show near-surface averages over a three month period in the regions of highest release. Note that highest methane levels occur over coastal Siberia and in the above ocean zones of near-Russia Arctic Ocean waters.

These measurements have been ramping higher in recent years with near-surface readings in the range of 1950 to 2000 ppb now common for the months of September through November in the areas affected (for comparison, global surface averages are now in the range of 1840 ppm).

By themselves, these measurements are evidence of a substantial Arctic methane release. But further up in the troposphere — at the mid cloud level — even higher levels of methane have been recorded.

For as methane releases from the sea and land surface, it becomes trapped in the mid-cloud layer. There, a sandwich of cloud and moisture form a cap beneath which methane tends to concentrate. In this layer, readings can be quite a bit higher than surface measurements. Recent years have shown numerous instances where methane readings in the mid-cloud layer spiked above 2300 parts per billion.

Last year during September, the now annual plume of methane emitting from the Arctic Ocean pushed readings as high as 2571 parts per billion at this level of the atmosphere. It was a reading more than 700 parts per billion above the global surface average. A spike fueled by the anomalously high rates of methane emission from the Arctic surface waters and Siberian tundra during the Fall of 2013.

This year, despite extraordinarily spotty coverage due to cloud interference, the METOP sensor found Arctic methane concentrations in the range of 2666 parts per billion in the mid cloud layer. The spike occurred just this past Sunday and exceeds the September 2013 spike by 95 parts per billion — a level more than 800 parts per billion above current global surface averages.

In combination, observations of a rapidly warming Arctic Ocean and observations of Arctic methane readings between 6 and 60 percent above the global average in near surface regions and in the mid cloud layer are a clear signal that human-caused Arctic warming is forcing an ever-greater methane release. To a greater and greater extent, large carbon stores are being weakened and tapped by the various mechanisms that are an up-shot of human warming. The location of these large-scale releases, as observed in the satellite record, is confirmation of ground and ocean based observations conducted by Arctic researchers such as Dr. Semiletov and Shakhova. And the releases themselves may well be some validation of our more dire concerns.

This new spike is yet more evidence of a sizeable, anthropogenic-spurred, release that is impacting not only regional methane levels, but global levels as well. Whether this newly observed release is part of a slow global response to the initial human heat forcing — one that will take centuries to fully emerge — or is part of a much more rapid and dangerous response to an also very rapid human heat forcing is now unclear.

What is clear is that feedbacks to the human heat forcing are now starting to become plainly visible. That they are providing evidence of a stronger release from some sources on a yearly basis. A troubling amplifying feedback to the already dangerous and extraordinary human emission. One that should serve both as a warning and as a spur to reduce and eliminate human greenhouse gas emissions from all sources and to switch energy systems away from fossil fuels as swiftly as possible.