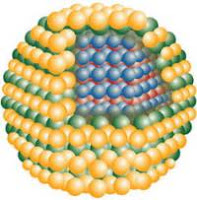 Last week, the University of Missouri announced a new method to detect silver nanoparticles in fresh produce and other food products.

Though not mentioned by researchers, it’s conceivable that the protocol could be modified to test for chemtrail dispersants, as well.

Over 200 agricultural pesticides contain nanosilver, which studies have shown to be toxic to humans and the environment. Over 1,600 consumer products are known to contain nanoparticles, ranging from clothes to cleaning agents, to food, cosmetics, and drugs; but with no regulatory requirement to disclose, the real number is likely far higher by orders of magnitude.

“Our goal is to detect, identify and quantify these nanoparticles in food and food products and study their toxicity as soon as possible,” said Mengshi Lin, associate professor of food science in the MU College of Agriculture, Food and Natural Resources, and lead author of the study published in the Journal of Agricultural and Food Chemistry.

Lin’s team immersed pears in a silver nanoparticle solution similar to a pesticide application. They washed and rinsed the pears repeatedly over four days and found silver nanoparticles still attached to the skin, and some that had even penetrated the pulp.

“The penetration of silver nanoparticles is dangerous to consumers because they have the ability to relocate in the human body after digestion,” Lin said.

Several years of toxicity studies on nanoparticles reveal a host of health issues associated with their ingestion, including DNA, brain and respiratory damage.

Food research scientist Ellin Doyle noted that, “Nanoparticles are readily taken up by many types of cells in vitro and are expected to cross the blood-brain barrier that [normally] excludes many substances that might harm the brain.”

Back in 2005 Dr Mae-Wan Ho reported that, “Quantum dots consisting of a core of fluorescent cadmium selenide, touted as a non-invasive way to image internal body tissues, break down in the body, releasing cadmium, a toxic heavy metal.”

In 2010, the FDA absurdly denied any foods contained nanoparticles, this despite its own scientists admitting it. In 2012, when the FDA was finally forced to admit nanoparticles exist in our food and cosmetics, it refused to regulate them.

Nanoparticles are ubiquitous in the drug industry as well. Not only can skin be fabricated on a nanoplatform, but a new development promises their nano product can encapsulate and destroy viruses in situ.

What happens to those nanocells after the virus is destroyed? Where do they go? We do know that nanoparticles can reach every part of the body and accumulate and damage an organ’s function, because of their ultra high reactivity due to their tiny size.

As with quantum physics, particles in the nano-size range behave differently than at the macro level.

Farmers and gardeners understand this instinctively when working with clay versus sandy soils. Clay particles are so tiny (2,000 nm) compared to sand (50,000 nm) that clay’s electrons can exert more attractive force, binding the tiny particles together. Too much clay in a soil’s texture, and water will be trapped, unable to seep further into the soil, drowning a plant’s roots.

“Nanotechnology is a powerful new set of technologies for observing, taking apart and reconstructing nature at the atomic and molecular level,” wrote the International Center for Technology Assessment in response to the FDA’s refusal to regulate it.

Beyond its small size, ICTA added:

[Nanotech] is best understood to mean materials that have the capacity to be fundamentally different, with new chemical, physical, and biological properties that cannot be predicted from the properties of their larger material counterparts.

It’s apparently hard to test for nanoparticles. At a United Nations Nano-Agri conference in 2010, reports the Institute for Agriculture and Trade Policy:

[A] Dutch government participant said that testing for the presence of ENMs [engineered nanomaterials] in food would be difficult, to judge by the experience of a Dutch testing lab. Lab technicians had mixed ENMs in a food substance and were surprised that they could not find the just-incorporated ENMs using the electronic tunneling microscope commonly used to visualize ENMs.

So the University of Missouri team has made an important breakthrough. It’s possible that a protocol similar to the nanosilver test could also be developed to detect other types of nanoparticles, including barium, strontium, aluminum and fluoride, elements found in higher-than-normal quantities after an aerial spray.

In an interview with George Noory, activist and filmmaker Dane Wiggington reports that the aluminum sprayed in chemtrails is only 10 nm in size. That small of a size can go anywhere it wants inside the human body.

As these metallic nanoparticles accumulate in our bodies, we are becoming “more conductive” and thus more receptive to radio frequencies. This is just one more reason why smart meters are so dangerous.

The Noory-Wigington interview starts at about 39:10 and generally addresses chemtrails, with only a short discussion on nanomaterials. But understand, what’s being sprayed on us is at the nano scale:

Proving chemtrail damage to humans and the environment may be the tool needed to waken the sleeping giant. Lord knows no empire was ever “voted” out of power; it has always taken the masses to storm the Bastille, so to speak.

I don’t think any legal precedent is going to get us anywhere on this. It’s only going to be when the natives, the entire population, is foaming at the mouth, grabbing their pitchforks and shovels and looking for whoever’s responsible.

With all the forced modifications to our DNA, one can easily imagine becoming a nanoslave for Empire. Wouldn’t it be just our luck, then, to run into Dorothy Brodesser when she’s pointing a double-barreled shotgun at Bruce Willis in Surrogates. “You’re an abomination,” she explained, right before she blew his robotic self to pieces.