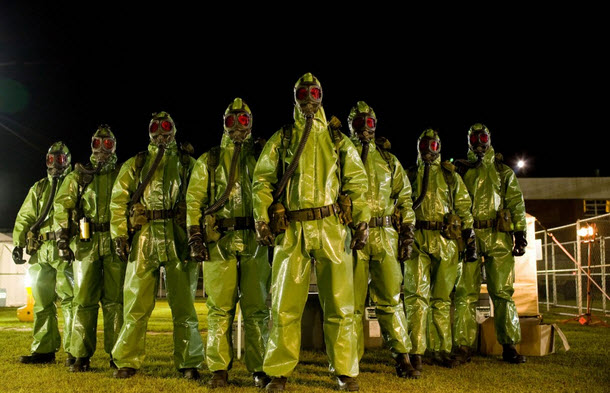 We warned a week ago of the various possibilities surrounding an Ebola outbreak in America, and today we get some degree of confirmation of a medical-based martial-law coming to the US. Governor Dan Malloy has declared a Public Health Emergency in Connecticut, authorizing the “isolation of any individual reasonably believed to have been exposed to the Ebola virus.” Simply put, as we noted previously, the State of Public Health Emergency allows bureaucrats to detain and force-vaccinate people without due process – despite not one single case being found in CT. If there is a major Ebola pandemic in America, all of the liberties and the freedoms that you currently enjoy would be gone.

“I hereby declare a public health emergency for the State, pursuant to the Connecticut General Statutes Section 19a-131a, for the duration of the epidemic. Specifically, in accordance with Connecticut General Statutes Section 19a-131b, I authorize the Commissioner of Public Health to Order the isolation or quarantine, under conditions prescribed by the Commissioner of Public Health, of any individual or group of individuals whom the Commissioner reasonably believes to have been exposed to, infected with, or otherwise at risk of passing the Ebola virus.”

Which he defended as a precautionary and preparatory measure in the event that the state has either a confirmed infection or has confirmed that someone at risk of developing the infection is residing in the state.

“We are taking this action today to ensure that we are prepared, in advance, to deal with any identified cases in which someone has been exposed to the virus or, worst case, infected,” said Governor Malloy.  “Our state’s hospitals have been preparing for it, and public health officials from the state are working around the clock to monitor the situation.  Right now, we have no reason to think that anyone in the state is infected or at risk of infection.  But it is essential to be prepared and we need to have the authorities in place that will allow us to move quickly to protect public health, if and when that becomes necessary.  Signing this order will allow us to do that.”

Translated… as we previously noted:

If there is a major Ebola pandemic in America, all of the liberties and the freedoms that you currently enjoy would be gone.  If government officials believe that you have the virus, federal law allows them to round you up and detain you “for such time and in such manner as may be reasonably necessary.”  In addition, the CDC already has the authority to quarantine healthy Americans if they reasonably believe that they may become sick.  During an outbreak, the government can force you to remain isolated in your own home, or the government may forcibly take you to a treatment facility, a tent city, a sports stadium, an old military base or a camp.  You would not have any choice in the matter.  And you would be forced to endure any medical procedure mandated by the government.  That includes shots, vaccines and the drawing of blood.  During such a scenario, you can scream about your “rights” all that you want, but it won’t do any good.

In case you are tempted to think that I am making this up, I want you to read what federal law actually says.  The following is 42 U.S.C. 264(d).  I have added bold for emphasis…

(1) Regulations prescribed under this section may provide for the apprehension and examination of any individual reasonably believed to be infected with a communicable disease in a qualifying stage and (A) to be moving or about to move from a State to another State; or (B) to be a probable source of infection to individuals who, while infected with such disease in a qualifying stage, will be moving from a State to another State. Such regulations may provide that if upon examination any such individual is found to be infected, he may be detained for such time and in such manner as may be reasonably necessary. For purposes of this subsection, the term “State” includes, in addition to the several States, only the District of Columbia.

(2) For purposes of this subsection, the term “qualifying stage”, with respect to a communicable disease, means that such disease—

(A) is in a communicable stage; or

(B) is in a precommunicable stage, if the disease would be likely to cause a public health emergency if transmitted to other individuals.

In addition, as I discussed above, the CDC already has the authority to isolate people that are not sick to see if they do become sick.  The following is what the CDC website says about this…

And as Police State USA summarizes,

Governor Dannel Malloy has declared Connecticut to be in a state of public health emergency, enabling the indefinite suspension of certain civil rights. State bureaucrats have been granted the broad authority to forcibly detain suspected sick people without due process. The declaration came preemptively, as Connecticut has not yet seen a single case of the virus it purports to stop.

Rationalizing his actions, the governor said in a statement: “We need to have the authorities in place that will allow us to move quickly to protect public health, if and when that becomes necessary. Signing this order will allow us to do that.”

The recipient of most of the newly-imparted power is Jewel Mullen, Connecticut’s Commissioner of the Department of Public Health (DPH). By having this measure in place, Commissioner Mullen explained, “we don’t have to scramble in the event I need to take action.”

The actions that authorities might want to “scramble” to use is the forcible quarantine of citizens — without charges or trial.

Connecticut General Statutes Section 19a-131a spells out the powers that may be used during the state of public health emergency:

As noted above, the Commissioner may issue an order of mass vaccination at his or her own discretion.

Section 19a-131d states that any individual who refuses to comply with any portion of the order may be punished with with fines and imprisonment for up to one (1) year.

Fending off a police state requires constant vigilance against efforts to desecrate civil liberties. As the current scenario has shown us, a climate of fear — fear of disease, terrorism, foreign threats, etc. — makes it all-too easy to suspend constitutional rights with minimal public resistance. Many people actually feel grateful to see the government absorbing greater powers; taken with the promises of keeping them safe.

The state of public health emergency will remain in effect indefinitely until lifted by the governor.