Russians Request Geoengineering To Be Addressed In IPCC Report 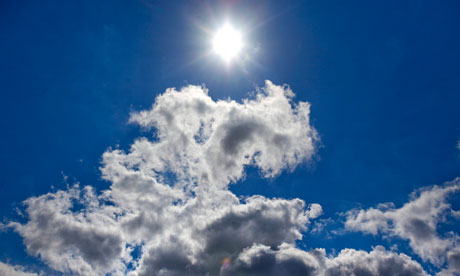 As damage to the earths climate system increases by the day, the geoengineers appear to be ready to “double down” by increasing the decimating programs to even larger levels.

The Russian government is asking for ‘planet hacking’ to be included in the climate science report, leaked documents show

Documents seen by the Guardian show Russia is asking for a conclusion of the report to recommend geoengineering. Photograph: Graham Turner for the Guardian

Russia is pushing for next week’s landmark UN climate science report to include support for controversial technologies to geoengineer the planet’s climate, according to documents obtained by the Guardian.

As climate scientists prepare to gather for the Intergovernmental Panel on Climate Change (IPCC) in Stockholm to present the most authoritative state of climate science to date, it has emerged the Russian government is asking for “planet hacking” to be included in the report. The IPCC has not included geoengineering in its major assessments before.

The documents seen by the Guardian show Russia is asking for a conclusion of the report to say that a “possible solution of this [climate change] problem can be found in using of [sic] geoengineering methods to stabilise current climate.” Russia also highlighted that its scientists are developing geoengineering technologies.

Geoengineering aims to cool the Earth by methods including spraying sulphate aerosols into the stratosphere to reflect sunlight, or fertilising the oceans with iron to create carbon-capturing algal blooms.

Such ideas are increasingly being discussed by western scientists and governments as a plan B for addressing climate change, with the new astronomer royal, Professor Sir Martin Rees, calling last week for such methods to buy time to develop sources of clean energy. But the techniques have been criticised as a way for powerful, industrialised nations to dodge their commitments to reduce carbon emissions.

Some modelling has shown geoengineering could be effective at reducing the Earth’s temperature, but manipulation of sensitive planetary systems in one area of the world could also result in drastic unintended consequences globally, such as radically disrupted rainfall.

Responding to efforts to discredit the climate science with a spoiler campaign in advance of the report, the chairman of the IPCC, Rajendra K Pachauri, said he was confident the high standards of the science in the report would make the case for climate action. He said: “There will be enough information provided so that rational people across the globe will see that action is needed on climate change.”

The Russian scientist Yuri Izrael, who has participated in IPCC geoengineering expert groups and was an adviser to the former Russian president Vladimir Putin, conducted an experiment in 2009 that sprayed particles from a helicopter to assess how much sunlight was blocked by the aerosol plume. A planned test in Britain that would have used a balloon attached to a 1km hose to develop equipment for spraying was prevented after a public outcry.

Observers have suggested that Russia’s admission that it is developing geoengineering may put it in violation of the UN moratorium on geoengineering projects established at the Biodiversity Convention in 2010 and should be discussed on an emergency basis when the convention’s scientific subcommittee meets in Montreal in October.

Civil society organisations have previously raised concerns that expert groups writing geoengineering sections of the IPCC report were dominated by US, UK and Canadian geoengineering advocates who have called for public funding of large-scale experiments or who have taken out commercial patents on geoenginering technologies. One scientist who served as a group co-chair, David Keith of Harvard University, runs a private geoengineering company, has planned tests in New Mexico, and is publicising a new book called The Case for Climate Engineering.

Nearly 160 civil society, indigenous and environmental organisations signed a letter in 2011 urging caution and calling on the IPCC not to legitimise geoengineering.

Silvia Ribeiro, Latin America director of the technology watchdog ETC Group, said: “We have been warning that a few geoengineering advocates have been trying to hijack the IPCC for their agenda. We are now seeing a deliberate attempt to exploit the high profile and credibility of this body in order to create more mainstream support for extreme climate engineering. The public and policymakers need to be on guard against being steamrollered into accepting dangerous and immoral interventions with our planet, which are a false solution to climate change. Geoengineering should be banned by the UN general assembly.”

Matthew Watson, a senior lecturer at the University of Bristol’s Earth sciences department and one of the team behind the cancelled balloon project, said: “In general ought the IPCC to be thinking about geoengineering? Yes. But do I want to see unilateralism or regionalism affect the debate? Certainly not. The people who don’t like geoengineering will suggest the IPCC is a method for normalising it.”

He added: “The IPCC has to be very careful about how it handles this [geoengineering] because it is clearly a very significant output that people are very mindful of.”

While the IPCC is intended to be a scientific advisory panel, government delegates have been reviewing the summary report and make final decisions about it in Stockholm at the end of the month.

Sweden, Norway and Germany expressed more scepticism about geoengineering and asked that the report underline its potential dangers.

“The information on geoengineering options is too optimistic as it does not appropriately reflect the current lack of knowledge or the high risks associated with such methods,” noted the German government.

Geoengineering is expected to play a much larger role in the next IPCC reports coming out in 2014. Observers were surprised that it had turned up in this first major report – meant to assess physical science rather than mitigation strategies.

Russia’s climate negotiators did not respond to a request for comment.