Strange radar blob over Huntsville, Ala. was military test – What a Relief!! 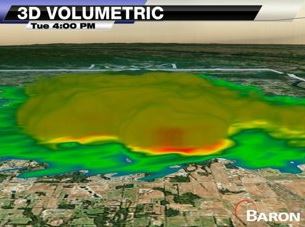 Gee, what a relief the “blob” was just the military dumping highly toxic elements all over us. No need to worry!!

This 3-D radar view over Huntsville, Ala. shows the strange blob that persisted there for hours.When a strange blob showed up on weather radar over Huntsville, Alabama back in June, there were plenty of equally-strange ideas floating around about what caused it, but the mystery has now been solved, thanks to some persistent weather service scientists.

Meteorologists see some strange things with the weather sometimes, but back on June 4, forecasters in Huntsville had a real mystery on their hands. A large blob suddenly turned up on their weather radar, which they thought was a sudden ‘pop-up’ thunderstorm, but looking outside there wasn’t a storm in sight. The sky was sunny with just a few clouds, and there wasn’t any smoke visible either. The standard radar continued to show it, though, and even when they switched to dual-polarity — where the radar sends and receives in both the horizontal and the vertical — the blob persisted. In total, it was visible for over nine hours.

There was plenty of speculation about what caused it. Some went straight for conspiracy-theory territory, talking about secret military transmitters. Others went for the disaster angle, thinking it might be signals from a damaged utilities substation interfering with the radar. There was even talk about it being caused by 1,000 ladybugs that the local botanical gardens released that day. However, Matthew Havin, the data services manager for Baron Services, a weather technology company in Huntsville, told LiveScience: “It would take many millions of ladybugs to really show up on a weather radar, and it wouldn’t look the same as what we were seeing.”

It didn’t take very long for the mystery to be solved, though. The severe weather group at the University of Alabama – Huntsville caught on first after finding clumps of hair-like strands of fibreglass on the ground. Two days after the ‘incident’, the US Army’s Redstone Arsenal in Huntsville put out a press release explaining that it was a test of military chaff — a defense system that interferes with radar-guided missiles, forcing them to miss their intended target.

With thousands of these hair-like fibres being dropped out of a plane over the city, the extremely calm winds in the area that day ensured that they stayed in the same area and simply spread outward, forming the large, persistent blob on the radar.

Havin has spent the time since June working on a detailed look at how the weather contributed to the event, which should be of help to forecasters if a similar situation occurs in the future. He presented his study at the National Weather Association meeting, in Charlottetown, S.C., last week.

5 Responses to Strange radar blob over Huntsville, Ala. was military test – What a Relief!!