The Planetary Burning Rages Out Of Control 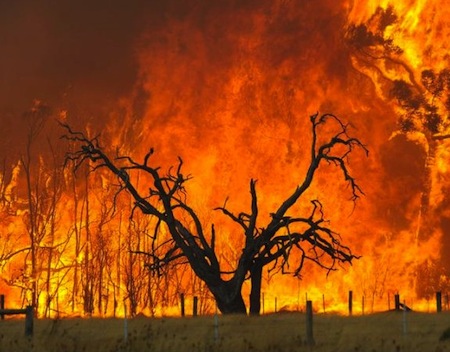 The NOAA map below shows the climate engineered frying of the Western US is scheduled to continue. The ever darker colors of shading over the west shows degrees of warming above “normal”. The relentless aerosol spraying of the skies is creating heat, drought, and fires that are literally transforming the Western US. 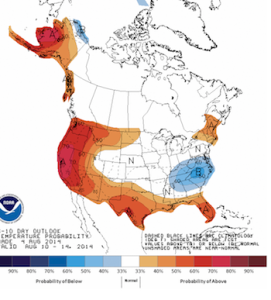 The satellite picture below shows what most cannot generally see and do not know about, the constant blanket spraying of the Eastern Pacific. The aerosol spraying in conduction with the ionosphere heater (HAARP type installations) effectively creates much of the conditions described above. 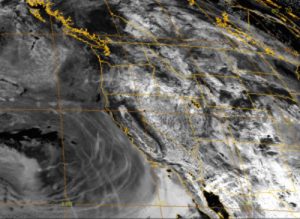 As is generally the case with most environmentally focused news sources, the article below has the usual climate science perspective. It effectively describes the horrific conditions unfolding on the ground but completely omits the climate engineering elephant in the room which is a primary causal factor for many of the conditions described.
Dane Wigington
geoengineeringwatch.org

They call them pyrocumulonimbus. In layman’s terms — fire thunderstorms.

At the surface, a very large wildfire covering tens of square miles or more can produce quite a lot of heat. The smokey column cast off by the burning blaze rises, generating lift in the atmosphere even as it seeds the air with smoke — nuclei to which water droplets can adhere and from which clouds can form. The rising column contacts water vapor, pushing a vast head of it upward. As this heat-driven column hits the upper reaches of the troposphere, it cools, and the water vapor condenses to the readily available smoke aerosols.

This process produces what is called a pyrocumulus cloud or a fire cloud — a smoke and heat fed version of the normal and far less ominous puffy cumulus clouds we are so accustomed to seeing during summer afternoons. In the pyrocumulus, if the updraft is intense enough, if the fire beneath the cloud strong enough, it erupts into a pyrocumulonimbus — a fire thunderstorm rife with lightning and, if the firefighters are lucky, rain as well.

On August 5, 2014, NASA got an amazing shot of a pyrocumulonimbus cloud exploding over the massive and anomalous wildfires still raging in Arctic Canada. See that horrific boiling cloud stack above fire and smoke in the center-left of the image below? That’s a fire thunderstorm:

Explosive pyrocumulonimbus cloud near Great Slave Lake on August 5 of 2014. Marked off red areas in the image indicate fire boundaries for individual fires. For reference, Buffalo Lake in the lower left corner is about 35 miles long from end to end. Image source: NASA.

NASA keeps a close watch on fire thunderstorms for a number of reasons. First, they are an indication of the heat updraft intensity rising off the fire beneath. And though they can result in beneficial rains, the storms are, many times, dried out by an over-abundance of smoke. As a result, a dry fire thunderstorm can add to fire hazard by casting off bolts of fire-setting lightning while begrudgingly holding back their moisture load.

Lastly, and perhaps most hauntingly, the fire thunderstorm is a delivery mechanism for black and brown carbon aerosols to the stratosphere, where they can do considerable damage. For if the updraft in the fire thunderstorm is powerful enough, water vapor droplets laden with heat intensifying dark carbon can break the troposphere boundary and enter the stratosphere. There, these dark aerosols trap heat and intensify global warming.

NASA studies have shown that dark aerosols in the stratosphere can have a global warming potential impact up to a million times that of a similar volume of CO2, so even a small amount lofted by fire thunderstorms could have a substantial effect. And the recent very, very intense fires in the Arctic region may well be providing an ominous and very widespread mechanism for just such a dangerous delivery.

The region where this fire thunderstorm erupted on August 5 is experiencing what is likely the most intense Arctic burn Canada has ever seen. Since the start of this year, and as of August 6, about 2,850,000 hectares (11,000 square miles) have burned in the Arctic Northwest Territory (NWT) alone. This burn area so far for this one territory is almost twice that for the whole of Canada during an average year through early August. For the NWT, it represents an epic burning more than 15 times that of the 15 year average (which is usually 185,000 hectares by this time of year).

To say that such a major burn for an Arctic region normally resistant to wildfires is extraordinary may well be an understatement. The blazes this year cast off smoke that covered much of the North American Continent, crossed Greenland and has ridden weather systems around the globe. Many fires have burned non-stop for more than a month, burning the soil and thawed permafrost once the forest fuels are exhausted.

Climate models show an increased prevalence of Arctic wildfires as human warming continues to advance into the Arctic this Century. As of the mid 2000s and throughout this decade, we have seen very intense wildfires raging in Arctic Canada, Alaska, Scandinavia, and Siberia.

Massive wildfires still burning in Siberia on August 6, 2014. For reference, bottom edge of frame is about 300 miles. Image source: LANCE-MODIS.

That these fires are an amplifier to human driven warming is probably a given. They dump extra CO2 and methane into the atmosphere, they burn both the more recent forest carbon store and the far older store in the soil, they break the permafrost cap, opening up new fuels for fires in subsequent years and providing avenues for methane and CO2 release, they dump dark carbon over low albedo surfaces such as ice sheets and sea ice, and they produce fire thunderstorms with the potential to inject dark carbon into the stratosphere.

While taking into account the entire Arctic system feedback to human caused climate change will likely be a monumental task, the mechanism of Arctic wildfires to tap and deliver the massive land-based Arctic carbon store to the atmosphere in various ways may be one of the critical elements in the overall feedback system. One that to any rational observer appears to be energetically emerging now. An expanding Arctic outburst of summer smoke and flame that is terrifying to watch.

6 Responses to The Planetary Burning Rages Out Of Control