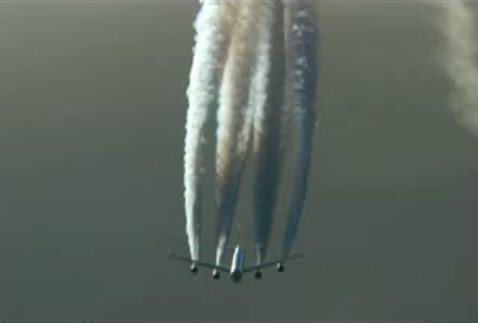 The study below confirms the conclusions we have held for many years based on all available data. Geoengineering can and does produce extremely large scale cooling anomalies, but at the cost of aworsened warming overall, a completely disrupted climate system, and a planet that is now contaminated from top to bottom. The military industrial complex never cares about the side effects of long term effects of what they do. The fact that they can “force” the climate is perceived as power and success to them. They will continue to geoengineering the planet until “critical mass” of awareness on geoengineering is reached with global populations. At that time, our collective reality will come to a head. We will see what happens when we come to that bridge.

Many geoengineering techniques are focused on ways of reducing the sun’s rays by blocking them spraying chemical compounds into the atmosphere to reflect sunlight away from earth. At least this is the claim by government scientists justifying global operations of this kind to reduce climate change and global warming. However, two German researchers are debunking the claim using a simple energy balance analysis to explain how the Earth’s water cycle responds differently to heating by sunlight than it does to warming due to a stronger atmospheric greenhouse effect.

The researchers are also showing that this difference implies that reflecting sunlight to reduce temperatures may have unwanted effects on the Earth’s rainfall patterns. The results are now published in Earth System Dynamics, an open access journal of the European Geosciences Union (EGU).

They’ve been called chemtrails, aerial spraying, aerosol emissions, cirrus clouds, among many other terms. The largest reports come from Canada and U.S. but it happens all over the world including countries such as France, Germany, New Zealand, Australia, the United Kingdom among many others. Thousands of planes spray chemicals, salt or other particulates into our atmosphere in an attempt to curb global warming (so they say).

Comparing Israeli sunlight records from the 1950s with current ones, researchers were astonished to find a large fall in solar radiation. There has been a staggering 22% drop in the sunlight. Sunlight was falling by 10% over the USA, nearly 30% in parts of the former Soviet Union, and even by 16% in parts of the British Isles. Although the effect varied greatly from place to place, overall the decline amounted to one to two per cent globally every decade between the 1950s and the 1990s.

The goal is that these stratospheric aerosols will be engineered to migrate to particular regions (e.g. over the arctic) or to rise above the stratosphere.

Why Geoengineering Will Never Work

Axel Kleidon and Maik Renner of the Max Planck Institute for Biogeochemistry in Jena, Germany, used a simple energy balance model to determine how sensitive the water cycle is to an increase in surface temperature due to a stronger greenhouse effect and to an increase in solar radiation. They predicted the response of the water cycle for the two cases and found that, in the former, evaporation increases by 2 percent per degree of warming while in the latter this number reaches 3 percent. This prediction confirmed results of much more complex climate models.

“These different responses to surface heating are easy to explain,” says Kleidon, who uses a pot on the kitchen stove as an analogy. “The temperature in the pot is increased by putting on a lid or by turning up the heat — but these two cases differ by how much energy flows through the pot,” he says. A stronger greenhouse effect puts a thicker ‘lid’ over the Earth’s surface but, if there is no additional sunlight (if we don’t turn up the heat on the stove), extra evaporation takes place solely due to the increase in temperature. Turning up the heat by increasing solar radiation, on the other hand, enhances the energy flow through the Earth’s surface because of the need to balance the greater energy input with stronger cooling fluxes from the surface. As a result, there is more evaporation and a stronger effect on the water cycle.

In the new Earth System Dynamics study the authors also show how these findings can have profound consequences for geoengineering. Many geoengineering approaches aim to reduce global warming by reducing the amount of sunlight reaching the Earth’s surface (or, in the pot analogy, reduce the heat from the stove). But when Kleidon and Renner applied their results to such a geoengineering scenario, they found out that simultaneous changes in the water cycle and the atmosphere cannot be compensated for at the same time. Therefore, reflecting sunlight by geoengineering is unlikely to restore the planet’s original climate.

“It’s like putting a lid on the pot and turning down the heat at the same time,” explains Kleidon. “While in the kitchen you can reduce your energy bill by doing so, in the Earth system this slows down the water cycle with wide-ranging potential consequences,” he says.

Kleidon and Renner’s insight comes from looking at the processes that heat and cool the Earth’s surface and how they change when the surface warms. Evaporation from the surface plays a key role, but the researchers also took into account how the evaporated water is transported into the atmosphere. They combined simple energy balance considerations with a physical assumption for the way water vapour is transported, and separated the contributions of surface heating from solar radiation and from increased greenhouse gases in the atmosphere to obtain the two sensitivities. One of the referees for the paper commented: “it is a stunning result that such a simple analysis yields the same results as the climate models.”