Waking Up The Masses 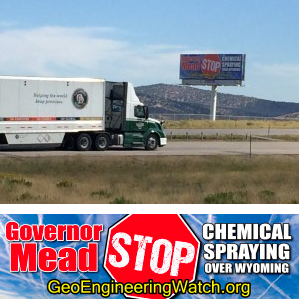 Sometimes it takes a billboard to get things done, and sometimes it takes lots of them. The billboard above is on Interstate Hwy 15 heading into Provo, Utah. My most sincere thanks to the couple that helped get this sign up. Though they wish to stay anonymous for now, they have done much for the cause of exposing the climate engineering nightmare, they deserve our gratitude. The word is getting out fast and people are truly beginning to “Look Up”. Lets all keep pounding the drums of the great awakening, our time is now.
Dane Wigington
geoengineeringwatch.org 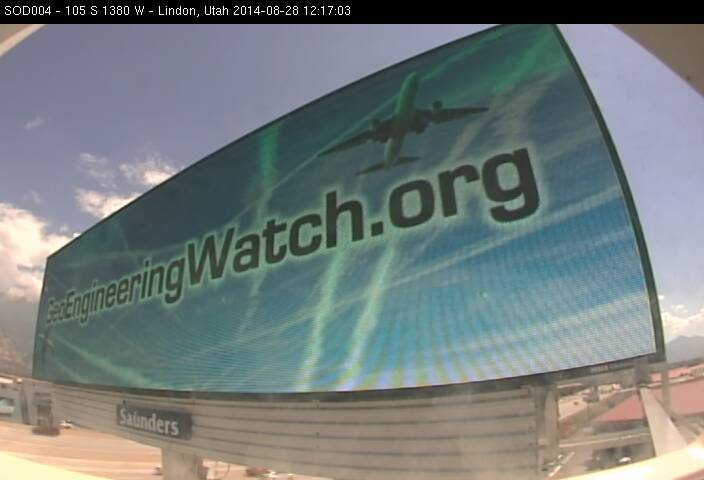 A statement from the concerned elderly couple that was behind this billboard, again, our thanks to them.

An older couple living in Star Valley, Wyoming spent all of calendar 2013 in an effort to alert newspaper publishers, county commissioners, religious leaders and mining company executives of the dangers that airborne Geo Engineering activities posed to the environment.  Documentation illustrating the micro management of the coal industry by the Environmental Protection Agency, while the same agency ignores and refuses to investigate the hazards of airborne toxins leads one to believe that the Agency is either negligent or complicit in this activity.  The couple published scores of booklets; sent out hundreds of letters across the state as well as to the editors of all 44 newspapers in the state as well as travelling to various cities to talk to environmental organizations and mining associations.  Their efforts seemed fruitless.  They then contacted the mayors and city council members of the ten largest cities in the state with compelling documentation about the hazards of airborne toxins, and were rewarded with ONE response from the mayor of Cheyenne.  It seemed pointless to try and overcome the lassitude of the Wyoming residents.  Dialogue with national elected representatives proved to be pointless since their responses were sophomoric.

Since their efforts in 2013  yielded such poor results; a different approach was needed.

The couple decided that rather than appeal to functionaries, they would take the message to the general public.  Highway billboards are seen by thousands of people each day, and also by “ truckers”; who are patriotic, communicative, and grounded in the real world and daily observe the airborne spraying. They may be able to call attention to this activity in a meaningful way.  Billboards calling attention to Geo Engineering activity which provide a link to the  “ Geo Engineering  watch website “ could be placed on all major highways.  The couple, and their friends leased a large billboard on Interstate 80 near Evanston, asking the present governor to put an end to spraying.  Another bill board on Interstate 15 near Provo, Utah will picture  aircraft engaged in spraying and have in bold letters, the name of the Geo Engineering Watch website.

Billboards are the most cost effective way to call people’ss attention to a looming disaster.  Readers who want to join this fight can get together with friends and associates and contact a billboard company to place some signs on highways in their areas.  Contact the outdoor advertising companies.  Engage their own art departments and combine your monies to rent or lease a billboard to alert your fellow Americans to what is happening in our once pristine skies. A groundswell of alert angry citizens might just convince the people engaged in this activity to stop doing it.

16 Responses to Waking Up The Masses