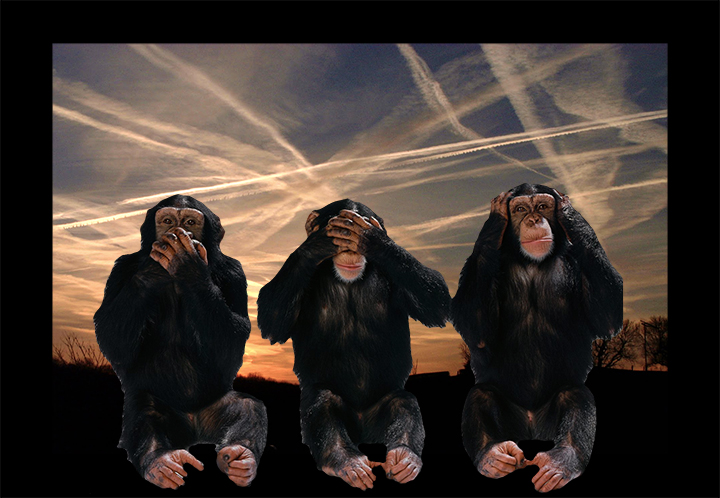 The climate “scientists” still have their collective heads buried in the sand. The article below is laughable and tragic at the same time. It is absolutely astounding how the so called “experts” grab at straws to try and explain the unexpected slowdown in the planetary warming. Do they never look up, ever? This would seem to be the case as the ongoing global geoengineering assault goes completely unnoticed by the vast majority.

The planet is virtually encased in a cocoon of highly toxic reflective metals. “Global dimming” is now fully 22% or more, available science backs this up, not to mention what we can see with our own eyes. Blue skies are now very seldom seen thanks to the constant spraying. Of course the “scientists” have never attempted to acknowledge this elephant in the room.

Now lets add constant chemical ice nucleation of clouds and storm systems to the mix. This process is artificially cooling air masses. Chemical nucleation now appears to be the norm for much of the spraying going on. (google “geoengineered snow storms) The parade of geoengineered snow storms which has occured this winter/spring in the US is almost beyond belief. Don’t people realize is should not snow at temperatures well above freezing which is now often the rule?

HAARP’s manipulation of the jet stream must also be added to the equation. The jet stream patterns are now regularly extreme beyond any historical norms.

Finally, lets consider that much of the temperature reporting is just plain being falsified. In Northern California the temperatures officially reported for any given day are as a rule 3, 4, or even 5 degrees below what actually occurred for the daily high. This appears to be occurring across the US and perhaps throughout the entire global weather monitoring network. What has this done to the equation?

Global stratospheric aerosol geoengineering could not be a more obvious reality yet it still remains completely invisible to almost all of academia and much of the public at large.  Though the most intense spraying has been in the last decade plus, according to available data, these atmospheric experiments have been going on for over sixty years. The effect these programs have had on the climate is horrific and ongoing, and unquantifiable. The constant spraying of sun blocking and ice nucleating materials does indeed cool the planet down, but this cool down has come at an unimaginable cost. We are now completely painted into a corner. The more they spray, the more they seem to feel they have to spray in order to hide the ever increasing atmosheric and climate damage done by the spraying to begin with. In the meantime, every living organism is being poisoned, quite literally.

Though most of us feel considerable disgust for Al Gore and people like him, we must not “throw the baby out with the bath water” in regard to our sense of reason and our conclusions. The planet is warming, this warming is increasing rapidly, and geoengineering is likely the single greatest overall causal factor in fueling the fire. Geoengineering is the “Corexit” cure for planet Earth. Their philosophy? Hide the problem at any cost, even life on Earth.Though the spraying/HAARP programs do help to hide the extent of climate damage for a time, the same programs are likely the largest single cause for the climate disintigration and fluctuation unfolding around us.

Every day they continue to spray our collective horizon grows darker.

The article below is worth reading as it makes clear the depth of geoengneering denial and coverup.

Its up to all of us to bring the dire issue of geoengineering to light.

(Reuters) – Scientists are struggling to explain a slowdown in climate change that has exposed gaps in their understanding and defies a rise in global greenhouse gas emissions.

Often focused on century-long trends, most climate models failed to predict that the temperature rise would slow, starting around 2000. Scientists are now intent on figuring out the causes and determining whether the respite will be brief or a more lasting phenomenon.

Getting this right is essential for the short and long-term planning of governments and businesses ranging from energy to construction, from agriculture to insurance. Many scientists say they expect a revival of warming in coming years.

Theories for the pause include that deep oceans have taken up more heat with the result that the surface is cooler than expected, that industrial pollution in Asia or clouds are blocking the sun, or that greenhouse gases trap less heat than previously believed.

The change may be a result of an observed decline in heat-trapping water vapor in the high atmosphere, for unknown reasons. It could be a combination of factors or some as yet unknown natural variations, scientists say.

Weak economic growth and the pause in warming is undermining governments’ willingness to make a rapid billion-dollar shift from fossil fuels. Almost 200 governments have agreed to work out a plan by the end of 2015 to combat global warming.

“The climate system is not quite so simple as people thought,” said Bjorn Lomborg, a Danish statistician and author of “The Skeptical Environmentalist” who estimates that moderate warming will be beneficial for crop growth and human health.

Some experts say their trust in climate science has declined because of the many uncertainties. The UN’s Intergovernmental Panel on Climate Change (IPCC) had to correct a 2007 report that exaggerated the pace of melt of the Himalayan glaciers and wrongly said they could all vanish by 2035.

“My own confidence in the data has gone down in the past five years,” said Richard Tol, an expert in climate change and professor of economics at the University of Sussex in England.

Swedish chemist Svante Arrhenius first showed in the 1890s how man-made carbon dioxide, fromcoal for instance, traps heat in the atmosphere. Many of the exact effects are still unknown.

Greenhouse gas emissions have hit repeated record highs with annual growth of about 3 percent in most of the decade to 2010, partly powered by rises in China and India. World emissions were 75 percent higher in 2010 than in 1970, UN data show.

A rapid rise in global temperatures in the 1980s and 1990s – when clean air laws in developed nations cut pollution and made sunshine stronger at the earth’s surface – made for a compelling argument that human emissions were to blame.

The IPCC will seek to explain the current pause in a report to be released in three parts from late 2013 as the main scientific roadmap for governments in shifting from fossil fuels towards renewable energies such as solar or wind power, the panel’s chairman Rajendra Pachauri said.

According to Pachauri, temperature records since 1850 “show there are fluctuations. They are 10, 15 years in duration. But the trend is unmistakable.”

The IPCC has consistently said that fluctuations in the weather, perhaps caused by variations in sunspots or a La Nina cooling of the Pacific, can mask any warming trend and the panel has never predicted a year-by-year rise in temperatures.

Governments will find little point in reinforcing road bridges over rivers, for instance, if a prediction of more floods by 2100 doesn’t apply to the 2020s.

A section of a draft IPCC report, looking at short-term trends, says temperatures are likely to be 0.4 to 1.0 degree Celsius (0.7-1.8F) warmer from 2016-35 than in the two decades to 2005. Rain and snow may increase in areas that already have high precipitation and decline in areas with scarcity, it says.

Pachauri said climate change can have counter-intuitive effects, like more snowfall in winter that some people find hard to accept as side-effects of a warming trend. An IPCC report last year said warmer air can absorb more moisture, leading to heavier snowfall in some areas.

A study by Dutch experts this month sought to explain why there is now more sea ice in winter. It concluded melted ice from Antarctica was refreezing on the ocean surface – this fresh water freezes more easily than dense salt water.

Some experts challenged the findings.

“The hypothesis is plausible I just don’t believe the study proves it to be true,” said Paul Holland, an ice expert at the British Antarctic Survey.

Concern about climate change is rising in some nations, however, opinion polls show. Extreme events, such as Superstorm Sandy that hit the U.S. east coast last year, may be the cause. A record heatwave in Australia this summer forced weather forecasters to add a new dark magenta color to the map for temperatures up to 54 degrees Celsius (129F).