Inside the WEATHERMEN \ Chemtrailers Exposed 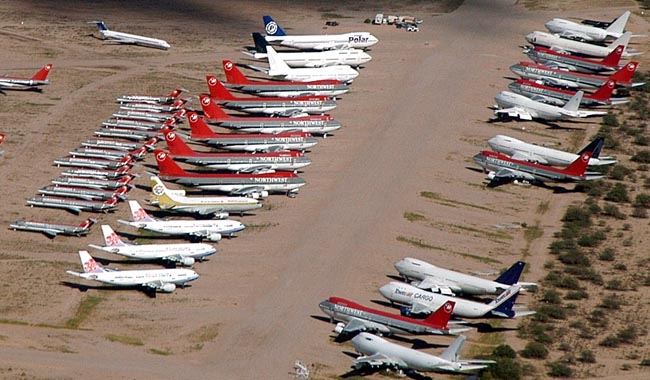 Evergreen’s public relations (propaganda) spokesman is handled by WPP run by Council on Foreign Relations member Philip Lader. Lader is also a member of the RAND corp. and is a director of UC Rusal, the largest Aluminum producer in the world located in Moscow, Sweden, Italy, and Australia. Nathaniel Rothschild is a big investor.

Philip Lader’s fellow Council on Foreign Relations (CFR) member John P Wheeler III was dumped into a land fill in Wilmington, Delaware. Wheeler, it is said, was about to expose the aerosol operations as being the culprit behind the massive bird and fish kills in early 2011. Wheeler III was a consultant to Mitre the non profit corporation with jurisdictional advice over the Federal Aviation Administration’s flight patterns. Mitre is conveniently located in McLean,Virginia, home of the CIA.

Evergreen Air is a CIA front company for chemtrail operations within the US, based out of Marana Air Park near Tucson Arizona and McMinville Oregon, near Portland.

A major missing piece of a grand conspiracy has been targeted by a drunk pilot. In a small town 30 miles east of the Pacific Ocean in Oregon is the center of a major global operation. At a bar in McMinnville, Oregon, an inebriated pilot attempted to impress one of the pretty ladies with tales of his secret mission.

The pilot’s pathetic attempt to portray himself as a Sean Connery or Daniel Craig caused him to (ante up) his importance and spill the secrets of the CIA’s asset Evergreen International Aviation.

The slurred revelations confirmed suspicions that Evergreen (International Aviation) is part of the major crap dump on the planet. Chemtrails made up aluminum, barium and other ingredients contribute to respiratory ills and change the acidity of the soil.

Evergreen works from over a 100 bases and employees 4,500 people. Delford Smith privately owns the company. They admittedly “perform” for the CIA.

Evergreen was given a no contest bid that gave them all the facilities in Marana, Arizona that previously belonged to CIA’s Air America (Pinal Air Park, Arizona).

The security at the Pinal site is said to be as severe as that of Area 51. It is run as a military base where one lost pilot got an armed escort immediately off the operational base. The 10 year pilot said it was nothing like anything he has ever seen.

Evergreen International Aviation brags of their planes that have 7 times the capacity of other fire fighters. One can carry 20,000 galleons. Firefighting … Right … and next we will be told the chem trails are to prevent global warming as millions more are advancing to an early death.

Evergreen International Aviation has exemptions from the law that are advertised on their web site. They can fly anywhere and not stay on a designated route. Has CFR members paved the way? People like Philip Lader and John Wheeler III … they were in a position to do just that.

Evergreen’s public relations (propaganda) spokesman is handled by WPP run by Council on Foreign Relations member Philip Lader. He worked under the present head of the CIA … Leon Panetta as White House deputy of staff under Bill Clinton.

Philip Lader is an “inside” authority on international affairs and business. He is the non-executive Chairman of WPP Group, Senior Adviser to Morgan Stanley International, and a board member for think-tank RAND Corporation. He is also a trustee of UC Rusal (largest aluminum company in the world) the British Museum and St. Paul’s Cathedral Foundation. Ambassador Lader has addressed trans-Atlantic audiences from the U.N.’s General Assembly Hall to state chambers of commerce and local world affairs councils, is a member of Rockefeller’s Council on Foreign Relations.
Philip Lader (CFR) is a key player driving toward world government. In addition to running the Public Relations for Evergreen International Aviation … Lader is a director of UC Rusal, the largest Aluminum producer in the world located in Moscow, Sweden, Italy, and Australia. Nathaniel Rothschild is a big investor.

Eugenic operation of Chemtrails has had the assistance of Mitre a non-profit Corporation that manages the Federal Aviation Administration, Homeland Security, and IRS. (1) The IRS is part of the Federal Reserve which is a major transmission belt driving the conspiracy.

Was John P. Wheeler III to sentimental for the killing underway? And got murdered by the Company?
The CIA is the enforcement arm of the Council on Foreign Relations

Mitre is conveniently located in McLean,Virginia home of the CIA.

Thanks to the drunken pilot and his loose lips … the Free People of the world can focus on the criminals who are poisoning our air and our water.

Intermountain’s main base of operations was Marana Army Air Field near Tucson, Arizona.

In 1975 Marana was acquired by Evergreen International Aviation, a company that has acknowledged connections with the CIA.

Other CIA “proprietary” airlines such as Air America and Air Asia also operated out of Marana during the Vietnam War years.

One of Intermountain’s covert missions was Operation Coldfeet   in which intelligence operatives were dropped in the Arctic to reconnoiter an abandoned Soviet drift station  and then recovered using a Fulton Skyhook recovery system mounted on an Intermountain B-17 Flying Fortress. The modified B-17G, N809Z, had previously operated out of Clark Air Base, the Philippines, in an all-black scheme for the CIA for agent insertions and other unspecified covert operations in Southeast Asia.

Intermountain is alleged to have been involved in the delivery of a number of A-26 Invader bombers to be flown by Cuban exile pilots supporting the Bay of Pigs Invasion.

During its years in operation, Intermountain used several types of aircraft including the Curtiss C-46 Commando, the Lockheed L-188 Electra, the De Havilland Canada DHC-6 Twin Otter and a B-17 Flying Fortress which was outfitted with a prototype Fulton surface-to-air recovery system, performed Arctic operations, and appeared at the end of the James Bond  film Thunderball.

The Western Army National Guard Aviation Training Site (WAATS) and other numerous National Guard units are located inside SAHP. The WAATS is used principally for all ARNG AH-64 Apache Attack Helicopter training by the ‘Gunfighter University’.  It is also extensively used by the British Army for ‘Conversion To Role’ training for Apache combat operations in Afghanistan.

The Arizona Wing of the Civil Air Patrol often hosts its annual Basic Encampment there as well.

On Mar 28, 2013, Navy SEAL SCPO Brett Shadle was killed during parachute training here and another SEAL was injured. The U.S. Special Operations Command says the command has a parachute testing and training facility at Pinal Airpark.

6 Responses to Inside the WEATHERMEN \ Chemtrailers Exposed