Hiding The Crimes Of The Weathermakers 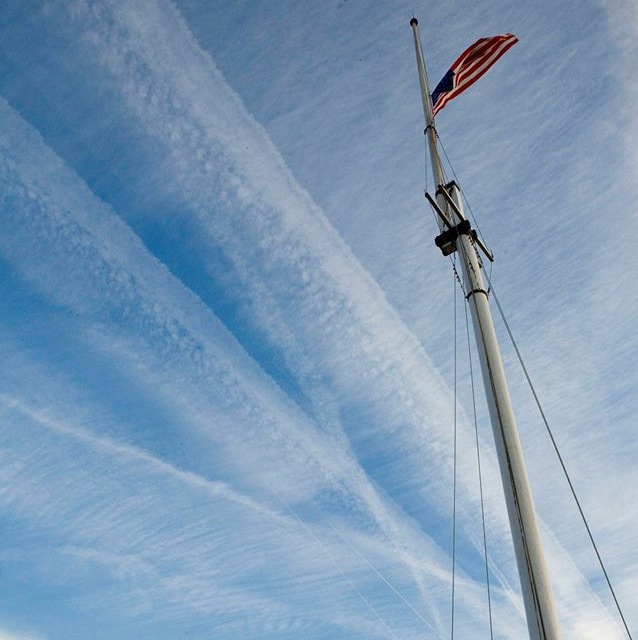 When the atmosphere is heavily aerosolized (sprayed with extremely small particles), it tends to migrate rain because there are too many condensation nuclei so the droplets don’t combine into a large enough drop to fall (there can be many other effects from atmospheric spraying depending on the elements used, exposure to radio frequencies, or the addition of chemical ice nucleating agents). Migrated moisture can (and often does) come down somewhere else in the form of a deluge. Are the climate engineers really spraying the skies over our storms? There can be no reasonable doubt about this if all available information is examined. Most will never see the crimes of the weathermakers on radar images as most of these images are “filtered” out. If the public were to regularly see the blatantly visible toxic particulate trails laced into their clouds and storm systems (as is clearly shown in the image on the left below) they would already be rioting in the streets to stop the lethal contamination and manipulation of the Earth’s life support systems. 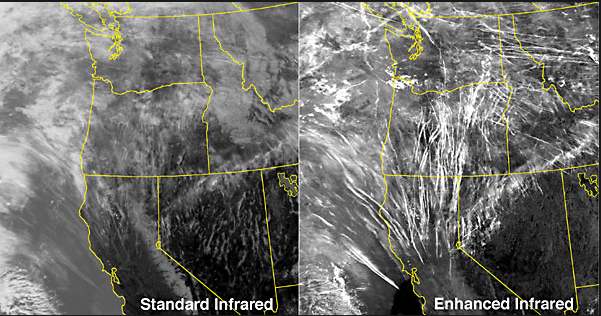 This is the same image, the left is filtered, the right is not. The public is always shown “filtered” images with very few exceptions

Why would the climate engineers migrate moisture in part of a storm (usually the leading of the storm) and then allow rain to fall later in the storm? Because there is often a great deal of moisture is in the front of the storms and the “AR” (atmospheric river) can lead the storm, this is where the “seeding” is most effective. The goal of “SRM” (solar radiation management) is to block as much of the sun’s incoming thermal energy as possible by creating as much cloud cover as possible (cloud enhancement geoengineering). So how much area can the climate engineers cover with mostly rainless aerosolized (and toxic) cloud cover? The satellite image below should be as shocking as the images above. Much of the moisture that was migrated right over the west on 12-2-2014 was then scattered across vast regions of the country in the form of rainless aerosolized cloud cover. 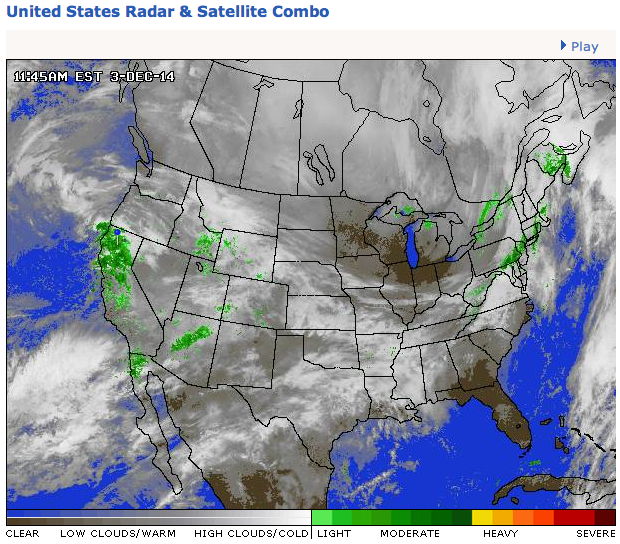 The image above is from 11:45 am 12-3-2014. MOST of the North American continent is COMPLETELY COVERED with generally rainless cloud cover, welcome to “solar radiation management”. Once the climate engineers have syphoned off enough of the rain to create the vast expanses of cloud cover they are after, some rain is generally allowed to fall. The aerosol spraying usually continues throughout most storms, and thus the rain often no longer comes down in torrents in the west as it historically did with such storms (as mentioned earlier, migrated rain can later come down in a deluge somewhere else). More precipitation is generally allowed at the tail ends of the weather fronts (though the precipitation is still contaminated with the heavy metal aerosols as as countless lab tests prove).

Again, why would one wave of a significant storm with substantial moisture completely pass over a region without dropping nearly as much rain as would have fallen historically? Only to be followed by a later wave of the same weather system which then delivers a higher percentage of desperately needed rain? Because the climate engineers can and are dictating where it rains, where it does not, how much falls, and how toxic it is. On the morning of 12-2-2014 I posted an article which highlighted the fact that some of the northern most regions of California were not receiving any significant rainfall in spite of the fact that very significant amounts of moisture were migrating over those areas. Satellite images and loops proved this fact. As mentioned, though rain was falling in some areas, others with the same amount of visible moisture (proven from radar images) got next to nothing. Even some regions with mountains (which should cause an “orographic enhancement” effect that generally squeezes out the most moisture) got very little rain. As of 11:15 pm on 12-2-2014 (after 3 days of “rain”), much of the mountainous zones in the north of the golden state had not received much rain in spite of heavy moisture moving right over them. Note how much rain there is completely surrounding Northern California in the image below. All of this rain migrated right over the regions in the far north of California  while dropping very little ( 20/100ths of an inch on 12-2 in the mountains north of Redding which were historically soaked by storm like this), why was there so little rain in this case? To create the vast expanses of aerosolized cloud cover shown in the PREVIOUS satellite image above. The image below was taken after the first major band of rain passed over California on 12-2-2014, though a few scattered regions in the state got a decent dose of precipitation, the far north did not. 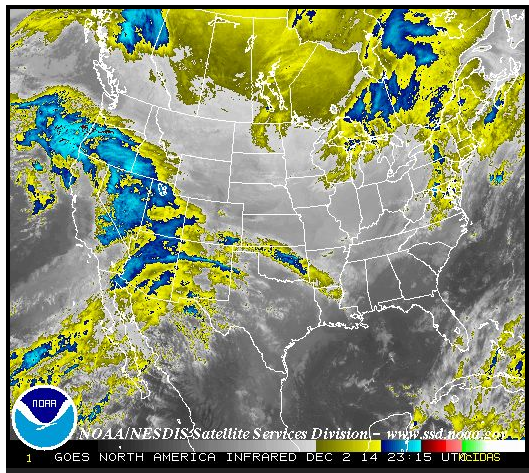 Can Climate engineering reduce rainfall if that is the desired effect? All available science says absolutely yes. On 12-3-2014, the climate engineers allowed some much needed rain to fall. Though the satellite image below actually shows much LESS moisture than the previous days image (shown above), many times MORE rain had fallen in the far north of California as of the time the image was taken on 12-3-2014 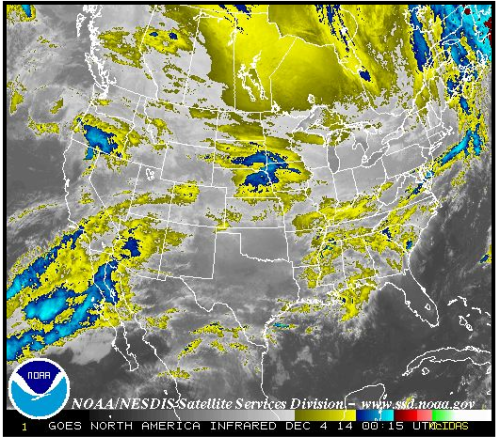 Why would the climate engineers go to so much effort to create so much cloud cover? They are attempting to slow what is likely already a “runaway” greenhouse effect on our planet. The problem is, the geoengineers are making an already bad situation far worse, not better. How much did global temperatures change from 1970 till 2009? The “departure from normal high temperature” maps below make this clear. In the last 5 years (from 2009 till present), the warming is increasing at an ever more rapid rate. 2014 will likely be the warmest year ever recorded on our planet in spite of not being an el nino  year. 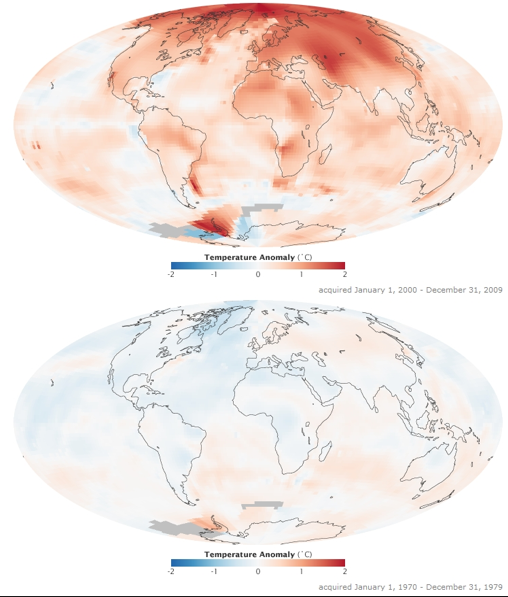 Those that live in the Eastern US have been cold, how can the planet be warming? Because the climate engineers have kept the Eastern US cooler at the cost of frying the US West and parts of the Arctic. This creates headlines which in turn has created division and confusion within the population . The GFS map below shows just how out of balance the engineered cool-down in the Eastern US is. Stealing moisture from the Western US  is one of the methods being used to artificially and very anomalously cool the Eastern US. Even when moisture does come down in the West, when heavily aerosolized, less rain falls than what would have been without the spraying. 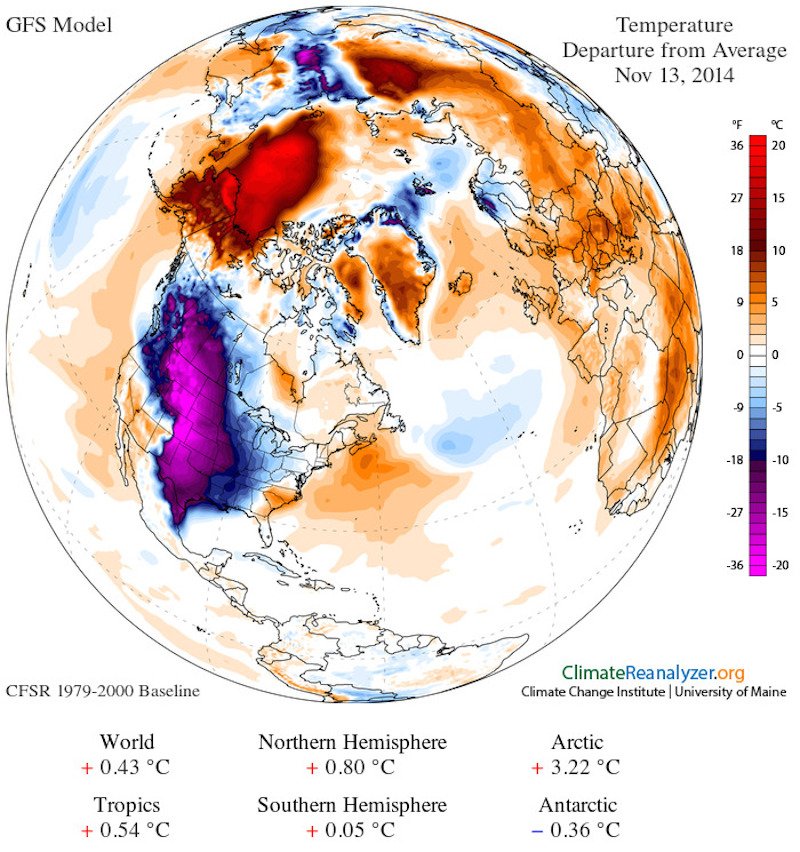 Climate engineering is NOT about the common good. It is NOT about keeping our warming planet cooler overall. Climate engineering is about power and control. It is about hiding the damage already done to the planet (much of it from the climate engineering itself)  at the cost of making that damage far worse overall. Just like the chemical “corexit” which was used in the Gulf of Mexico to hide the oil spill at the consequence of making the spill exponentially more toxic, climate engineering is being used to mask the unimaginable challenge of planetary meltdown (Earth has now had 356 consecutive months of ABOVE average temperatures) and to confuse and divide populations in regard to this dire challenge. There is also the aspect of weather warfare and biological warfare which is historically documented and inarguably now a part of the aerosol spraying and climate modification operations. Overall, the climate engineering insanity can only be described as an all out assault against ALL populations and ALL life on our planet. Join the fight to expose these crimes, make your voice heard, our lives depend on our actions.
DW
geoengineeringwatch.org

35 Responses to Hiding The Crimes Of The Weathermakers