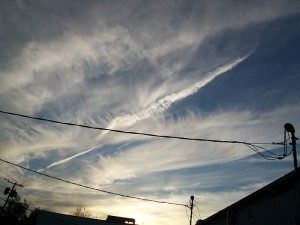 Civil Society Organizations from 17 EU member states challenge candidates in the upcoming EU Elections to come clean about their stand, on the established facts about clandestine aerial spraying of the European sky within the context of illegal, ongoing, climate manipulation and geoengineering programs before May 25.

8 – 9 April 2013, a conference was held at the European Parliament, under the title “Beyond Theories of Weather Modification – Civil Society against Geoengineering”.

The conference reassessed a 1999 resolution and lack, from both the sides of legislators and military to safeguard transparency and democratic control over classified programs, which affect entire populations without consent, democratic influence, or access to verifiable information and data.

Climate manipulation has become a proven and accomplished fact; that is, despite omissions of the facts in state, and most corporate media; despite systematically disseminated misinformation used to discredit solid science and evidence; and despite the fact that most elected officials in national parliaments and the EU parliament, most probably, wish that someone else would pick up that hot potato.

The organizations behind the 2013 conference, including Skyguards, challenge candidates in the upcoming EU Elections to the European Parliament to come clean about their position on the illegal programs, on transparency, democratic control, and not least, to come clean about their position on how they want to address and remedy institutional indifference and disdain for their electorate. In an open letter, styled to candidates in the upcoming elections, civil society organization stress:

On 8th and 9th April 2013, organizations from 17 countries in the European Union exposed to the European Parliament, in a conference patronized by MEP Mrs. Tatjana Zdanoka, their concerns about clandestine aerial spraying of the European sky in the context of illegal ongoing climate manipulation / geoengineering programs, as a follow up to the Resolution of the European Parliament on “Environment, Security and Foreign Policy”, approved on 14th January 1999, on the basis of Report A4-005/99 by the Committee on Foreign Affairs, Security and Defense Policy.

In its point “T ” and paragraph on “HAARP – A military weapon system with devastating effects on climate”, the Report made it explicit that:

Despite the existing conventions, military research is in progress on environmental manipulation as a weapon, as demonstrated for example by the Alaska-based HAARP system. Defined as a weapons system which disrupts the climate, outside of any legal framework, HAARP is a matter of global concern and has to be regarded as a serious threat to the environment, with an incalculable impact on human life’.

The civil society advocates stress that all members of parliament from all political groups were invited to attend the conference. Despite the importance of the subjects, however, not one attended to the conference. Moreover, they stress that none of the state or corporate mainstream media covered the event.

Whether the issue is geoengineering or any other subject matter, the astounding and disturbing fact is that none of the MPs found it necessary to inform him/herself about illegal, clandestine and classified programs which are being carried out without any form of democratic oversight, and which affect entire populations.

On a positive note, a petition that was presented to the Committee of Petitions of the European Parliament has been admitted.

The petition demands an independent investigation of the facts concerning environmental matters and consumer protections, and projects which are taking place without the knowledge and consent of citizens in defiance of the precautionary principle. The petition also stressed that the clandestine projects violate fundamental rights of European citizens as set out in the Treaties, such as the right to health, the right to security, the right to integrity, as well as the right to be informed.

Civil Society Demands that EU Parliamentary Candidates Come Clean about the Clandestine Projects before May 25.

The civil society advocates, representing organizations from 17 EU member States challenge candidates in the upcoming EU Parliamentary Elections to come clean about their position on the subject before May 25. Their open letter states:

In this perspective, and considering that this serious matter also entails an unconstitutional attack on national sovereignty, and in particular on food sovereignty, we would like to know if you, the 2014 candidates, are willing to:

Both the 1999 and the 2013 conference condemned the sophisticated military activity which is being carried out in defiance of the most elementary precautionary principles.

The conference also addressed new weapons systems which focus on the military use of the ionosphere, such as the HAARP program, based in Alaska, and its pendant near the Norwegian city of Troms and elsewhere.

Ultimately, the question whether candidates are willing to take action or not can be viewed as a testing stone that proves, whether a candidate will take action when illegal, clandestine projects are being carried out right above his own roof, or if is a candidate who will look down at his shoelaces and act as if he hadn’t seen or heard a word about it.

The least, that the electorate should be able to expect within a system that calls itself democratic, is that candidates take a stand on the subject and come clean about their position, so citizens can make an informed choice whom to vote and whom not to vote for.

It is worth noting that the European Commission, in 2013, planned to invest about two million euro to limit EU-critical media reports as well as EU critical opinion on social media like Facebook and Twitter up to the elections to the European Parliament in 2014. Part of the planned strategy was to sue news-media and journalists for publishing “false” information, ban EU skeptic journalists from press conferences, and infiltrate social media with “trolls” to bias debates and opinion.