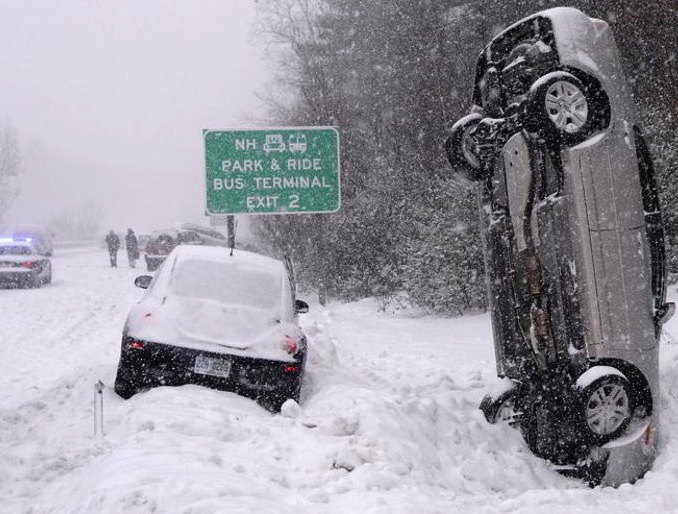 There is a mountain of data including already conducted experiments, satellite imagery, lab tests of snow, observations on the ground, and multiple existing patents,  all of which point solidly to the conclusion that snow storms are being engineered on a massive scale with well established weather modification processes.  Two known patents for the process of "artificial ice nucliation for weather modification" are posted at the bottom of this article. The Chinese government has openly admitted they are creating "artificial snow storms" but later backtracked after causing a billion dollars of damage to Beijing. 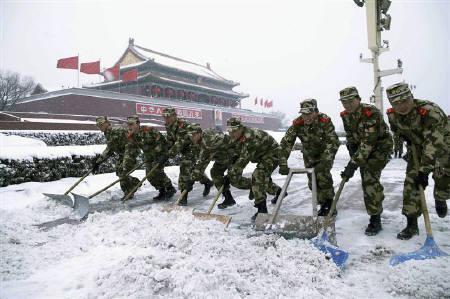 If the Chinese government can routinely create snow storms out of what should have been a rain event, how much more advanced must our government and the NATO powers be at this same process? When monitoring radar images of rain during a storm, it is now common to see the rain "flash out" to snow for no apparent reason. No orographic enhancement (when rain moves over mountains), no colliding air mass, nothing. The "meteorologists" at the Bain Capital/Rothschilds/military industrial complex owned Weather Channel, and Weather Central, call this conversion "turning over to snow". Why would rain just "turn over" to snow for no reason, at above freezing temperatures?

Why Would Those In Power Do This?

First, because they can. Why would the global power elite detonate over 1800 nuclear bombs? Because there is no one to stop these experiments. Because there is no regulation whatsoever of the ongoing global geoengineering programs though many "outlines" for such governance exist, as if these programs are not yet a reality. There are likely other straightforward reasons. 60 years of global climate experimentation have done horrific damage to the global climate system. The planet is warming at an astounding rate. Though there are countless forms of damage to the biosphere, climate engineering mathematically appears to be the greatest single source of damage. Massive ozone holes and methane releases are occurring. Total disruption to the hydrological cycle. Complete contamination of the Earth's surface and all life forms.  Those at the helm of the global spraying programs are trying to "cover up" the damage that has been done to our planet (much of it from the climate engineering itself)  by spraying yet more, and likely with an ever growing list of toxic elements. Isn't this the true definition of insanity? Doing the same thing on an ever bigger scale and expecting a different result? Though all available data makes clear that stratospheric aerosol geoengineering (SAG) can and does cool large regions temporarily, it comes at the cost of a worsened overall long term warming to the planet.  NASA's own data confirms this.

The problems that arise when ice nucleation is imposed on the atmosphere are many. Some consequences we cannot yet know for certain, but what we do know is bad enough. First, the entire  hydrological cycle is disrupted, and in general, significantly reduced. When there are too many condensation nuclei, the moisture tends to migrate in the form of aerosolized cloud cover. 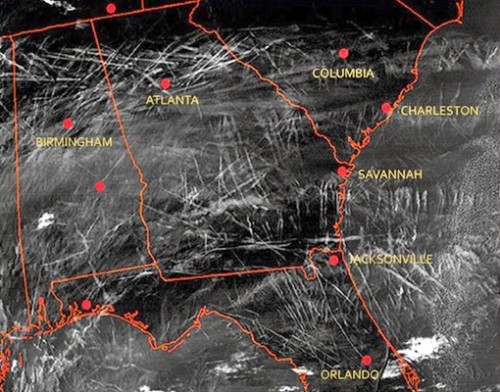 This means less overall precipitation in any form, rain or snow. Though less precipitation is the general rule, when heavy rain systems are aerosolized and chemically/artificially nucleated, significant "heavy wet snow" can still occur) Though the Weather Channel is doing their absolute best to sensationalize all the snow falling in various locations, the fact is there is a “snow drought” in much of the US. Yes, snow is falling, but not in significant amounts and the cold spells are very sporadic in nature. The ice nucleated snow storms create the illusion of a normal winter when in fact all available statistics paint a very different picture. As we get through “winter” and closer to spring, ice nucleated events will become much more obvious. “Above freezing” snow events will become more and more common. Still, it is important to remember that geoengineered snow storms can also be carried out under extreme cold scenarios. Whatever the initial air mass temperatures, the chemical nucleation mix can lower the surrounding temperatures much further. Snow from artificial ice nucleation at higher temperatures is almost always “heavy wet snow”. This is a newly introduced term pushed by the Weather Channel and other main stream media sources. The snow that does fall is toxic. There are numerous lab tests to confirm that the same highly toxic heavy metals named as primary elements in geoengineering patents are being found in this "artificially nucleated" snow. This poisons the air, soils and waters. The effects on the Northern boreal forests are already horrific. Trees are dying in mass and soil PH values are changing radically. The artificially nucleated snow can be incredibly dense and heavy (as already stated) , often causing major damage to trees and structures. How many fatalities have been caused due to the engineered winter catastrophes? Wind patterns and ocean currents are also being negatively affected by the ongoing spraying and manipulation of natural wind currents (the ionosphere heater installations around the globe also appear to be routinely manipulating the jet stream). This in turn is contributing to releasing methane hydrate deposits which threatens all life on Earth (search "geoengineering/methane release" on line). Photosynthesis is also being radically reduced. Extremely expansive "geoengineered" cloud cover results from the particulate dispersement. This type of cloud cover is often in the form of a largely featureless overcast sky.

What Is An Engineered Snow Storm Like, First Hand?

Two years ago I had to suffer through yet another ice nucleated snow storm in the woods of Northern California. In the days leading up to the storm, it was disturbing to watch the local TV "weathermen" trying to explain just how it was going to snow so much when only days earlier our region was almost 75 degrees. They tried to explain how the 30 to 40 mile an hour winds from the storm would mysteriously die down only over the upper Sacramento Valley and that's when the snow would fall, even with temperatures in the upper 30s to low 40s (diminished wind is also a known consequence of atmospheric aerosol saturation/geoengineering spraying, though there are always exceptions where winds can be strong ). As is now the rule, the approaching storm brought skies full of jet sprayed geoengineering trails which covered the entire horizon in short order. A sickly colored light penetrated this toxic canopy from the early morning hours of. Natural clouds eventually drifted into view under the manmade over-story but they did not have the usual majestic appearance as they were "melted" into engineered clouds above due to the aerosol saturation. The leading edge of almost all storms are sprayed heavily. This is the atmospheric river of the storm. The "AR" is a stated area of preferred spraying by the geoengineers themselves. The usual effect of this is a day or so delay of the storm and this case was no different. On that day, the local weathermen did their best to explain why the storm did not come in the day before as originally predicted. It "slowed down" they said. As the evening progressed, the 500 ft snow level that was predicted  for that afternoon did not happen. It seemed in this case the temps were so warm that the big chemical "cool down" took more effort, more spraying. It seemed the geoengineers might not pull it off as by 11 pm it was still raining at the 2000+ foot level on the mountain top where I and my family live. It was still well above freezing. Waking up at 5 am, I could already see broken trees from the massively heavy concrete snow that had apparently started some hours earlier in the night though the temperatures were still above freezing. I quickly bundled up and went outside to beat the "snow" off the drooping lims of countless trees. This is easier said than done in the case of such "heavy wet snow". It sticks like glue to everything it hits as it is in the process of melting even as it is still falling. It is not like the snow of my youth, fluffy powdery snow which easily came off the trees. There was, as predicted, no more wind. In the silence of the woods, jet after jet could be heard flying slow and low above the clouds. The snow kept falling. Into the night, though soaked to the bone from the soggy snow, I kept up my attempt to save the trees on our mountain. As the night went on, a sound that is very painful to me could be heard in increasing frequency on distant ridges and in deep canyons. Scattered throughout the darkness was the sound of trees crackling and snapping, being crushed under the weight of the "heavy wet snow". These are native trees, trees that have adapted to the historical conditions in this region. I have been through snow events here that dropped two or three times the depth of this snow with no damage, but this snow is different. Even the Canyon Live Oak, the strongest oak in the region, buckles under the weight and adhesion of this snow. It does not sluff off the trees but only sticks and builds (frequent ice storms have also increased radically due to the chemical ice nucleation process. Later in the night, the sickening sound of collapsing trees in the distant dark was almost overwhelming. 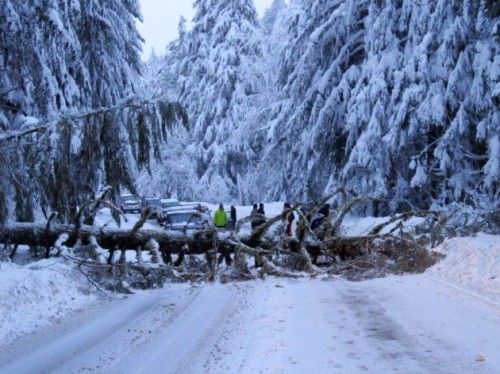 The only other sound that broke the silence was the constant parade of jets in the clouds overhead flying very low throughout the entire storm. By morning, half of the 20 inch depth of cement snow had already melted. The temperatures were still in the upper 30s and the snow had stopped. Countless broken and uprooted trees lay on the forest floor. Why? At this moment, there were virtually no jets to be heard. None. Soon enough, the snow turned back over to rain.  No jets, no ice nucleation, no more snow at the above freezing temperatures.

We are all in a literal fight for life. Our climate system and atmosphere are being systematically ripped apart. Every breath we take is tainted with the toxic metals and chemicals they are spraying. Every bite of food we eat, the same. There is no "organic" anything at this point as researchers from Europe and other parts of the planet  have recently shown. These toxic elements and other influences are being taken into all that lives. On top of this we are all being bombarded by the constant radio frequency transmissions that are also a part of the climate engineering insanity. Educate yourself on this most dire issue. Arm yourself with essential tools for educating others. It is far more productive to hand someone some credible information they can review at their leisure than to corner them with a rant that only puts up their defenses. Examples of information flyers can be found at  "geoengineeringwatch.org/ads".  Stand up, make your voice heard by sharing credible data with all you know, it's now or never.

21 Responses to Geoengineered Snow Storms Wreaking Havoc Around The Globe