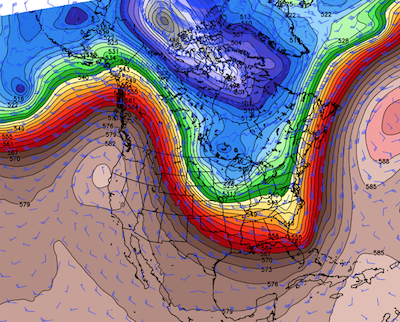 Share3.9K
Tweet
+1
Share
Pin7
3.9K Shares
The entire climate science community pretend to be scratching their heads over the ever more erratic jet stream patterns. The "experts" continue to come up with various explanations as to why the jet stream is behaving the way it is, but all of these explanations are willfully blind to the geoengineering elephant in the room. Ionosphere heater installations located around the globe are a major component of the ongoing climate engineering. These extremely powerful and dangerous facilities are being used to manipulate the jet stream. The climate science community as a whole is turning two blind eyes to the ongoing geoengineering insanity while Earth's climate and life support systems are being systematically torn apart. If the current trajectory of planetary destruction continues for much longer, we will have nothing left to salvage of our planet. We must ALL hold the "experts" to account. Email them, their associates, local media, groups, agencies, etc, and share these email contacts with others so that they can do the same. It's up to all of us to take every step possible in the critical effort to raise awareness with the still uninformed public and to give notice to those that are lying for the establishment that we know they are lying. The article below sheds more light on the increasingly destructive weather on our planet, even though the researcher/author of this piece will not mention the climate engineering issue. I have passed substantial amounts of geoengineering data on to the author (Robert Scribbler) and had nothing but silence as a response. Scribbler, just like the climate science community, knows that mentioning anything about the geoengineering issue is a very bad career decision, or worse. This being said, the article does accurately outline the rapidly increasing destruction from ever worsening weather. The entire climate system is unravelling, climate engineering is a major factor in this equation.
Dane Wigington
geoengineeringwatch.org

(Polar Amplification on Friday January 9, 2014 plainly visible in the GFS summary. Another warmer than average day for the Arctic in a warming world. Image source: Climate Reanalyzer.)

For the Arctic, it’s another much warmer than normal day…

Temperature anomalies for the region spiked to 3.55 degrees Celsius above the, already hotter than normal, 1979-2000 average. And a swath of the Arctic Ocean stretching from Greenland to Siberia experienced extraordinary 15-22 C above average temperatures.

It’s another day of Arctic Amplification — the fourth in an ongoing progression this week. Another day of extreme dipole temperature anomalies. And another day of record-setting weather. All symptoms, plain as day, of a world undergoing a fit of rapid, human-induced heating.

Warmth in The High Arctic Drives the Cold Out

Last night, while studying Earth Nullschool, I found a temperature of 27 F near Zemlya — an Island in the Arctic Ocean off Siberia. The night before last, I captured these two pictures — one of a region a few hundred miles south of the North Pole and well north of Svalbard at 22 F and another of the surface temperature near Richmond, Virginia at 20 F.

In other words, it was warmer just off Santa’s front porch than it was thousands of miles to the south in Richmond, VA.

In technical meteorological parlance there’s a term for such warm north, cold south temperature variations — dipole. In this case, it’s a cold North American Continent and a warm Atlantic Ocean pushing much higher than average temperatures far into the Arctic.

Such a warm airs surging north forcing cold airs south arrangement can result in some pretty extreme waviness in the Jet Stream. The kind of waviness that Dr. Jennifer Francis has warned is set off by just the kind of Arctic warming we witnessed this week.

And, as we can plainly see in the map below, we have an extraordinary meridional pattern in the Jet Stream occurring in perfect coordination with the current instance of polar heating:

I suppose some may call this kind of instance circumstantial. But what a circumstance, especially when one considers the plainly obvious and visible mechanism of the current polar temperature spike, the subsequent southward displacement of warm air from the polar zone, and the related warm air invasion flooding up from the North Atlantic into the heat compromised polar core.

This re-arranging of air masses has re-instated the kind of circulation pattern around Greenland we warned about during late November of 2014. A kind of off-center displacement of air masses that shoves cold toward hot and can result in some rather extreme weather.

Dr. Francis has also mentioned this resulting heightened severe weather potential in her research. And she can count herself among such visionaries as Dr. James Hansen who warned of ramping storm intensity resulting from a combined polar amplification and melting and softening of the remaining great glaciers in Greenland and, later, Antarctica.

Unfortunately, the more recent polar amplification episode did set off a spate of rather extreme weather in Scotland. The North Atlantic storm track intensified as temperature differentials ramped up. On Tuesday, a 930 mb low bombed out between Greenland and Iceland. Fed by a massive meridional air-flow, this storm soon generated very strong winds raging across the North Atlantic.

By last night, these winds roared throughout Scotland, peaking at 113 miles per hour — a new all-time record for the Northern Isles since wind measures began in 1970.

In a return to the kind of extreme weather that battered the UK for much of the winter of 2013-2014, trees were torn down, power lines unmoored and roads and railways blocked. This, in turn, forced a wide-scale emergency response throughout Scotland after last night’s brutal battering by hurricane force winds. From the BBC:

The storm caused the suspension of all ScotRail trains, although some limited services are now running. More than 46,000 homes are currently without power as the Atlantic jet stream caused gusts of more 100mph (160km/h).

So the observational evidence is pretty clear. Here we have yet another instance where polar heating is driving some rather extreme Jet Stream changes coupled with related instances of record extreme weather. And as human-related warming continues to intensify, we are likely to see far worse instances than today’s minor episode.

Hurricane Force Gusts Cause Disruption to Travel and Power