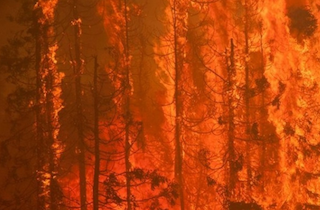 Around the globe record numbers of wildfires have continued to rage in 2015. Of all the sources of anthropogenic damage to the planet (and there are countless sources) the greatest single factor fueling the wildfire increase is climate engineering. Fires are currently raging all over the US West, all the way north to Alaska where record levels of acreage are going up in flames. Further east into Canada the story is the same. There was an extremely early start to the now record fire season in Siberia where vast sections of boreal forest are incinerating. In Russia, many recent fires in the Chernobyl "exclusion zone" pose radiation dangers in addition to the fire threat. Southern California is ablaze yet again. Portugal is one of many more countries battling wildfires. How about the southern hemisphere? The story has been the same. Brazil is burning to the ground, so is Chile. In Australia, the fires have been relentless and horrific. 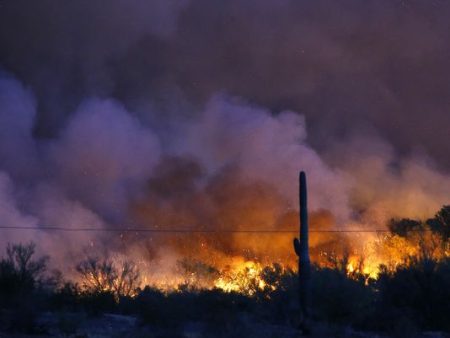 ​As the forests burn, the feedback loop of continued burning is fed. All the while, the decimating affects of climate engineering are feeding the planetary meltdown. Below is the latest update from Alaska where fires are continuing to devour the landscape at a record pace.
Dane Wigington
geoengineeringwatch.org

Half A Million Acres Burned In Just One Day, Alaska Shatters Record For Worst June Wildfire Outbreak Ever

All throughout the mainstream media last week we heard the same myopic litany — ‘a massive wildfire outbreak ongoing in Alaska is not abnormal.’ Well, today, all pretense that there was anything normal about the 314 wildfires still raging throughout the state has gone up in a cloud of boreal forest, tundra, and thawed permafrost emitted smoke.

As of 6:28 AM Alaska time today, 1,912,000 acres had burned in Alaska since the start of the year. That’s roughly 1,800,000 more acres burned than just before the current wildfire outbreak started on June 18th and 497,000 more acres burned over just the last 24 hour period alone. By comparison, the previous worst ever June fire outbreak for Alaska during 2004 burned less than 1,200,000 acres of the Arctic state. 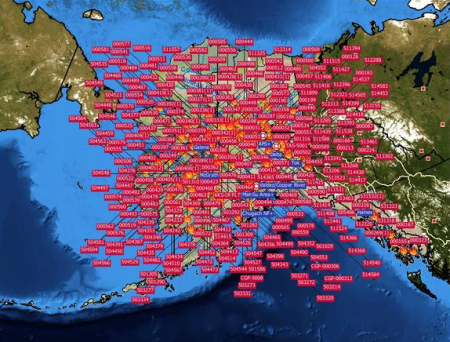 With 42 hours left in June and with more than 300 fires still active, it’s pretty clear that the current fire season is a historic, unprecedented, record-shattering event. One that will almost certainly break the 2 million acre mark and may show double the over-all previous record burning during June of 2004. An excessive new record that is occurring in the ominous context of the hottest year in the global climate record and a vastly irresponsible dumping of 50 billion tons of heat-trapping, CO2 equivalent (of which 32 billion tons is CO2) gasses into the atmosphere through fossil fuel burning and related industry each and every year.

As Alaska Experiences Worst Ever Burning for June, Northwest Territory Lights Up

As Alaska burned through half a million acres of forest in just one day, a massive heatwave was also setting off extreme wildfires throughout northwest Canada. It was the same heatwave that broke new temperature records all across Washington, and the mountain west. Temperatures in places like Walla, Walla Washington hit 113 degrees Fahrenheit (45 Celsius) on Sunday — breaking the previous all time June temperature record for the day by 4 degrees (2.2 C). A pulse of heat rising off the back of a strengthening El Nino in the Pacific, running all the way up the Western Seaboard and Mountains of the US and driving deep into northwestern Canada. 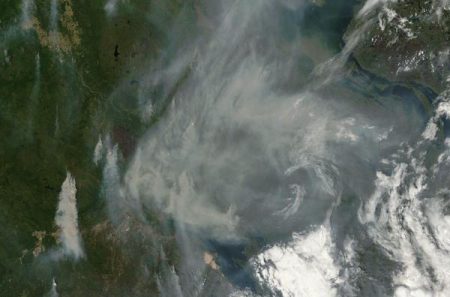 The added heat riled wildfires burning throughout much of the permafrost zone in Canada, pushing blazes to explosive size and dumping massive plumes of smoke into an atmosphere already heavily laden with Alaska’s brown carbon pulse. In the above LANCE-MODIS image we can see about 30 of these fires burning away near Great Slave Lake. Note that some of the fire fronts in the above image are more than 15 miles long.

Given the satellite assessment from yesterday, it appears that the same excessive heat, dryness and permafrost thaw that has set off record fires for Alaska during June is now also in play for Canada. Initial reports from Canada’ Interagency Fire Center confirm this assessment with 138 new fires erupting in just the past 24 hours alone and more than 2,250,000 acres burned for the country since the start of 2015. As a result of the excessive Arctic heat (associated with both El Nino and overall human warming) and extreme rate of new fire starts, we are at risk of seeing unpecedented wildfire conditions continuing to spread throughout this warming, vulnerable Arctic region.

UPDATE: Preliminary numbers for acres burned in Alaska, according to Interagency Center reports have been downgraded somewhat to greater than 1.6 million total acres burned. These totals are still in record range with between 200,000 to 300,000 acres burned each day. It seems, given the unprecedented number and intensity of fires now burning (currently 300) in AK that there’s some difficulty getting an accurate assessment of conditions on the ground. The downgrade is somewhat good news in light of an overall difficult and record fire season for Alaska. Will keep updating as new information becomes available.