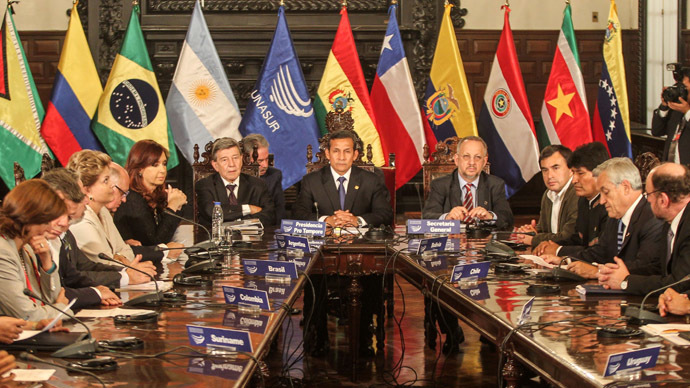 A great many countries around the world are now banding together against the empire of US hegemony. Though the US mainstream media is not saying a word, the pillars of the power structure that has been wreaking havoc around the globe are beginning to come down. From the insanity of geoengineering to the plunder of weaker countries all over the world, the NWO has been funded by the endless printing of the US dollar. The formerly endless supply of funding for the empire is rapidly coming to an end.
Dane Wigington
geoengineeringwatch.org

June 17, 2014. Bolivia. The American and European media are doing everything they can to black this news out. But it’s not going to stay a secret for long. As of this weekend, there’s a new New World Order on Earth and its enemy is the United States, the EU, the UN Security Council and the world’s shadow government led by the IMF and WTO. This new alliance of poor countries wouldn’t be much of a threat, except it includes two-thirds of the world’s nations including China and India.

It’s a sad day for the American people when their government and state-sponsored news industry blacks out such an important news story. Americans actually have to rely on outlets like the Havana Times in Cuba, The Times of India, and United Nations press releases. There’s a reason this news is being censored across the West. And it’s only the latest global news story over the past two weeks on this subject blacked out from the American people.  Read on to find out why.

End of the New World Order

When the richest and most powerful nations on Earth formed the G7, G8, G20 and the like, they united to combine their dominance over the remaining 175 countries that make up humanity. And for decades, the wealthiest 20 countries led by the US have gotten exponentially more wealthy at the expense of the poorest 175 nations, who in turn have gotten even poorer. That’s been the result of the West’s ‘New World Order’, led mainly by self-appointed global governments like the International Monetary Fund and the World Trade Organization.

133 of those 175 countries have had enough of the New World Order’s rigged global financial system based in New York and London. They’ve seen their economies destroyed by corrupt corporations and global governments that create a cycle of never-ending dependence and poverty.  They’ve seen their nations’ vast resources stolen by multinational corporations. Their agriculture landscape has been poisoned. Their citizens bankrupted by the IMF and Wall Street. And their democratically elected leaders overthrown by foreign agents from countries like the US.

They’ve had enough of the New World Order. And an alliance of 133 countries, two-thirds of the nations on Earth, signed an agreement this weekend to end the West’s New World Order and replace it with a fair, honest and legitimate World Order – one that lets everyone participate and benefit, not just the super rich.

The Next World Order

The organization is officially called the ‘Group of 77 and China’, but the alliance actually includes 133 nations. Showing just how much influence they have, their meeting this weekend in Bolivia was opened with a keynote speech by United Nations Secretary General Ban Ki-moon. In the audience were over 30 heads of state from around the world and official representatives from over 100 more governments. Also illustrating the organization’s growing influence, China isn’t even a member of the G77, but insisted on participating anyway in a show of unity with the globe’s Next World Order.

Venezuelan President Nicolas Maduro participated, telling the gathered nations they had to unite to, “fight for fair and sustainable economic growth and for a new world economic order.” Ecuadorian President Rafael Correa went one step further, telling the gathered national leaders and representatives, “Only when we are united across Latin America and united around the world will we be able to make our voice heard and change an international order that is not just unfair, it is immoral.”

A report from AFP on Yahoo News, about the only report found in Western media, describes how Cuban President Raul Castro also participated, but reserved his comments for a call to help their top ally Venezuela. Cuba, Venezuela, Bolivia and a number of South American countries have insisted they are currently under attack by the United States and the CIA, who they insist are desperately trying to orchestrate coups to overthrow their democratically elected, pro-socialist governments the same way they are accused of doing in the Ukraine recently.

Iran and the UN

An announcement published by the United Nations this weekend touts UN Secretary General Ban Ki-moon’s enthusiastic participation in the G77 meeting. It discusses how important this massive alliance is to the goals of the UN, particularly with regard to reversing the world’s growing economic inequality among nations. Moon and the UN are also sponsoring a separate but related meeting of nations in September to draft new climate resolutions to be enacted in 2015. 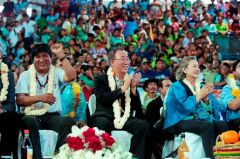 The announcement describes a private meeting between the UN Secretary General and Iran’s Vice President, ‘On the margins of today’s summit, Mr. Ban met with the First Vice President of Iran, Eshaq Jahangiri, to discuss development issues, as well as the potential role that Iran could play in restoring stability in Iraq and Syria. The Secretary-General added that he looked forward to Iran’s positive involvement on climate change and said he very much hoped that President Hassan Rouhani would attend the climate summit this September.’ The report also says the two leaders discussed Iran’s nuclear ambitions and the coming July deadline for compliance with past mandates.

Many of the government leaders in attendance took the opportunity to strike a blow against what they consider to be the biggest enemy of world peace, democracy and economic freedom – the United States. One leader even went as far as calling out President Obama by name and threatening the United States with a second Vietnam.

As reported by the Times of India, the G77 conference’s host this weekend – Bolivian President Evo Morales – threatened the United States and the American President telling the gathered heads of state, “If Mr. Obama keeps assailing the people of Venezuela, I am convinced that, faced with provocation and aggression, Venezuela and Latin America will be a second Vietnam for the United States. Let us defend democracy, natural resources, our sovereignty and our dignity.”

Cuba’s President Raul Castro was possibly the most pointed and focused in his remarks regarding the agenda of the participating countries. As reported by the Havana Times, Castro told the alliance of 133 nations, “It is necessary to demand a new international financial and monetary order and fair commercial conditions for producers and importers from the guardians of capital, centered in the International Monetary Fund and the World Bank, and from the defenders of neoliberalism grouped in the World Trade Organization, which are attempting to divide us. Only unity will allow us to make our ample majority prevail.”

One of the more ambitious goals of the G77 and its 133 participating countries is the elimination of the United Nations Security Council. World leaders insist it is little more than a five-nation tyranny over the full UN body. With five permanent members of the UN Security Council having veto power over the rest, UN policies and actions have been dictated by those five countries – US, UK, Russia, France and China. Members of the G77 want the Security Council eliminated so the UN can go back to being a purely democratic body.

The Cuban leader went on to describe a global economic system run by American hypocrisy and financial corruption, “The principles of International Law and the postulates of the New International Economic Order are brazenly violated, concepts that attempt to legalize meddling are imposed, force is used and threats of force are made with impunity, the media are used to promote division.”

This is just the latest organized attack on a global financial system rigged by corrupt governments and the multinational corporations that control them. Just last month, Russia and China signed a long term trade alliance that represents the first major crack in the US Dollar bubble. The two countries agreed to stop using US Dollars in their transactions and instead use their own two currencies. The two largest banks from both countries immediately announced they would be dumping the US Dollar as well.

On top of that, the world’s ‘BRIC’ countries – Brazil, Russia, India and China – have publicly declared their goal of replacing the corrupted US Dollar with some other global default currency. Now that Russia and China have finally taken actual steps to do that, the remaining two-thirds of the world will most likely begin making preparations to stop using the US Dollar as well. It was only this weekend that 133 of them pledged to do just that.

The scary part for Americans is that both Washington and Wall Street have promised this would never happen, because if it did, it would destroy the US economic system and possibly the US itself. Read the Whiteout Press article, ‘Russia-China Deals move US Dollar closer to Collapse’ for more information.