Engineering Earth, Do We Really Believe The Government Would Ask Our Permission? 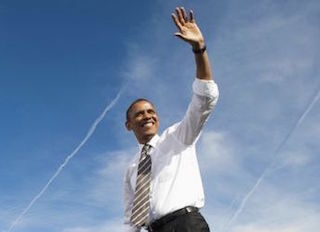 Any that answer yes to the question on the title of this article should do a serious rechecking of their reality. Top US military leaders have repeatedly stated on the record that climate change is the greatest national security threat of all. In the 43 second video below, Obama's recent statements make the government's stance on our imploding climate system crystal clear.

What rationally thinking person would believe the US government/military industrial complex would ask for public permission before fully engaging in what they themselves admit is the greatest threat to national security? Though the ongoing climate engineering insanity is making an already catastrophic climate scenario far worse, geoengineering is an immensely powerful covert weapon that the power structure is not about to admit to or give up. There is one thing you can truly depend on from governments (especially the US government), that they lie and deceive to a degree which can scarcely be comprehended. How consistently did the US government lie to the Native Americans? They signed over 500 treaties, ALL of which were broken. US citizens, who believe what they are told by the criminal cabal (that is our government), are living in a delusion. The criminally insane individuals that actually run our government (which are above our "elected officials" who are little more than puppets) ultimately view American citizens in the same light as the Native Americans, we are an increasing liability to the power structure.  As the American population awakens to the tyranny of its "government", the ever increasing surveillance of the US population is  yet more proof that our government ultimately views American citizens in the same light as any other adversary. Every one of us is being systematically poisoned by the constant highly toxic aerosol spraying of our skies.

The US military has been completely engaged in climate engineering for many decades, historical documents prove this fact. Their climate intervention/modification programs have radically added to the overall damage to the climate system. How bad is it now? Military installations in low lying coastal regions like Virginia are already flooding just from high tides due to rapid sea level rise. 2014 was the hottest year on record, 2015 is headed to shatter that record. Ocean temperatures are climbing so fast that charts constantly need to be remade. The heating is unprecedented in at least the last 3 million years and mass ocean die-off is occurring. Thousands of people are literally dropping dead from the heat in India while Alaska and SIberia are also undergoing rapid meltdown. California snow pack is at ZERO percent of normal.

But what about the "global warming pause" that some have claimed is happening? Special interests have propagated the absolute lie of a slowdown in the rate of warming on our planet and now that lie has just been completely exposed.

Many believe it's getting colder in Antarctica overall, is that really the case? Well, NO. In 2015 Antarctica recorded record shattering heat. Ice sheets in Antarctica are now facing imminent collapse due to continued temperature acceleration. Though there is some sea surface ice expansion in Antarctica, this is largely due to the voluminous amounts of fresh water running off the melting land ice. Fresh water freezes at a much higher temperature than sea water.

The military industrial complex does whatever they want because they can, because they are beyond any and all accountability or oversight. They have long since stated their desire to "own the weather". If you think they would ask your permission before intervening in the climate, you are not living in reality. Make your voice heard, get educated, get involved in the fight to expose and stop the climate engineering insanity. Our collective futures depend on the outcome of this battle.
DW

46 Responses to Engineering Earth, Do We Really Believe The Government Would Ask Our Permission?