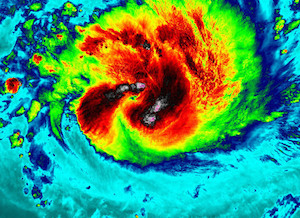 "Official" agencies and the experts who work there like to pretend the massive aerosol loading of the atmosphere with aerosols is just the result of anthropogenic pollution. This is the story these agencies are paid to put out in order to perpetuate the "official denial" of the obvious ongoing aerosol spraying being done by jet aircraft day in and day out all over the world. Climate engineering is of course not the only source of particle pollution in our skies, but it is likely the largest single source by far (mathematically speaking). ALL weather is affected by unprecedented aerosol levels in the atmosphere. Even cyclones can and are being radically manipulated with the use of aerosols and ionosphere heater facilities. What impact do the geoengineering nano particulates have on extratropical cyclones? The article below gives further insight.
Dane Wigington
geoengineeringwatch.org

Intense geoengineering activity across the planet is influencing weather patterns globally to unprecedented levels. After studying one year of video on aerosols emission and transport, NASA’s Jet Propulsion Laboratory has found aerosol pollution is changing weather and climate around the planet and strengthening extratropical cyclones–a type of storm system that drives much of the world’s weather.

Scientists call airborne particles of any sort — human-produced or natural — aerosols. However, human-produced aerosals are now a top contributing source of pollution and a major concern, especially due to operations by international governments through military aircraft which pollute the sky almost daily to influence climate. The simplest effect of increasing aerosols is to increase clouds. To form clouds, airborne water vapor needs particles on which to condense. With more aerosols, there can be more or thicker clouds. In a warming world, that’s good. Sunlight bounces off cloud tops into space without ever reaching Earth’s surface, so we stay cooler under cloud cover.

Pollution doesn’t just pollute, it changes weather. Asia is home to the world’s 20 most polluted cities, but that dirty air doesn’t stay put, as the above animation of aerosol emissions shows. How that pollution spreads is entirely dependent on how weather systems move it. Different types of aerosols have different effects, and the same aerosol can have different effects depending on how much is in the air and how high it is. Both aerosol emissions from operations involving military aircraft and soot particles at certain altitudes can cause cloud droplets to evaporate, leaving nothing but haze. If there’s no water vapor in the air — the air is dry. At other altitudes, this air pollution can cause clouds to be deeper and taller, producing heavy thunderstorms or hailstorms. With so many possibilities, aerosols are one of the largest sources of uncertainty in predicting the extent of future climate change.

From computer system modeling, many researchers know exactly howgeoengineering is changing global weather patterns. Spraying large amounts of sulphate aerosols into the stratosphere is obscuring the visibility of the sun’s rays and that is affecting all life on Earth. Rainfall patterns are going haywire and there is a potential that more mass disruption to the ozone layer will occur.

During the last 30 years, clouds over the Pacific Ocean have grown deeper, and storms in the Northwest Pacific have become about 10 percent stronger. JPL researcher Jonathan Jiang and his postdoctoral fellow, Yuan Wang, designed a series of experiments to see if there was a connection between the two phenomena and they found that aerosal emissions are making matters worse.

The researchers pointed out that their work should raise even more red flags about aerosol-based geoengineering solutions and that interventions in the Earth system intended to counteract global warming may backfire. Jiang and Wang found that sulfates are the most effective type of aerosol for deepening extratropical cyclones. Extratropical cyclones, sometimes called mid-latitude cyclones or wave cyclones, are an everyday phenomenon which, along with anticyclones, drive the weather over much of the Earth. They are capable of producing anything from cloudiness and mild showers to intense hail and thunderstorms.

Cyclones that happen outside the tropics can be connected with volatile fronts and “baroclinic zones” which may spell disaster for North America. Ongoing aerosal injections will only bring more stormy winter weather globally and will likely change the climate in other ways we cannot yet foresee.

Jiang and Wang used a numerical model that included weather factors such as temperature, precipitation and barometric pressure over the Pacific Ocean as well as aerosol transport — the movement of aerosols around the Earth. They did two sets of simulations. The first used aerosol concentrations thought to have existed before the Industrial Revolution. The other used current aerosol emissions. The difference between the two sets showed the effects of increased pollution on weather and climate.

Wang explained that increased pollution makes more water condense onto aerosols in these storms. During condensation, energy is released in the form of heat. That heat adds to the roiling upward and downward airflows within a cloud so that it grows deeper and bigger. It is creating large storms which punctuate U.S. winters and springs about once a week, often producing heavy snow and intense cold.

“Large, convective weather systems play a very important role in Earth’s atmospheric circulation,” Jiang said, bringing tropical moisture up to the temperate latitudes. The storms form about once a week between 25 and 50 degrees north latitude and cross the Pacific from the southwest to the northeast, picking up Asia’s pollutant outflow along the way.

Essentially, geoengineering at very high altitudes is artificially moving these weather systems into areas which is affecting low and high pressure systems to a greater degree affecting the upper-atmosphere wind patterns and polar jet streams.

How much these climate effects will increase in the coming decades is an open question. How much they can be reversed if emissions are reduced in also remains unclear.

It is evident that climate is drastically transforming and weather events are becoming more unstable each year. This appears to be either the intentional or unintentional consequence of geoengineering. Regardless, the forecast although unpredictable, will certainly provide more extremes at all ends of the Earth.

Kelley Bergman is a media consultant, critic and geopolitical investigator. She has worked as a journalist and writer, specializing in geostrategic issues around the globe.