Chemtrails in the Sky in San Luis Obispo 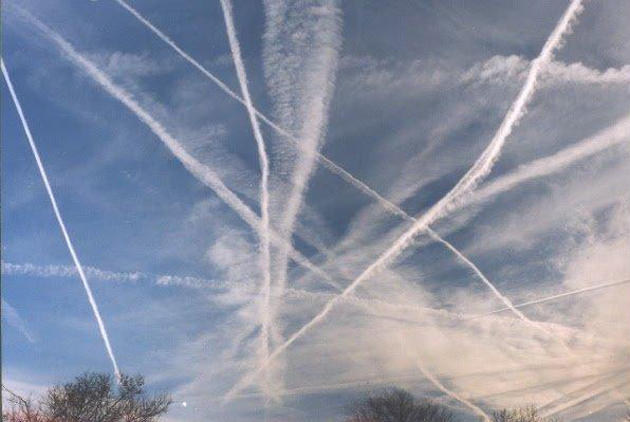 I live in San Luis Obispo and went for a walk this morning (Monday, April 21) at 9 a.m. (at 8 a.m. it was a blue sky), and by the time I finished my walk the sky was already filled with chemtrails. I could still see three or four planes spraying their aerosol near sunrise and imagining that thousands of people would look up and see what they would interpret as passenger planes simply emitting exhaust. And that saddens me.

At about 10:30 a.m., that blue sky turned into a milky haze and what is traditionally called a “heavy spray day” from the chemtrail researchers and activists.

I do what I do to alert people, make them aware of certain conditions, policies dictated by corporate interests, have people investigate on their own — sites, articles, video trailers, speeches at the United Nations, excerpts from documentaries, whistleblower presentations — and when I showed two films including dinner recently, the total amount of people seeing those films was 35, mostly women who are very concerned about how in the early morning a sky that is clearly blue and within a couple of hours can turn to a milky haze. They want answers.

The word “concern” is important, and I wish to refer to it occasionally throughout this blog. I also realize we are inundated with issues that have stressed perhaps to the maximum point of human capacity — acquiring data about the collapse of various systems and the emotional makeup to even take in any more concerns. Is it possible that we have reached our limit of what we can become aware of? Is there a point where we simple exclaim, “OK, enough already!”

I do what I do, we all do what we do. I have various email lists that include thousands of email addresses, including the media, to alert people to the many “causes” that happen to be on my radar at the time, or a new interest or passion that a friend manages to entice me to become aware of.

I try to distill certain information to give people enough to create a pause in their usual day-to-day concerns. I also understand that they/we are inundated with normal day to day activities:  like loving a spouse, feeding and housing and giving tenderness and love to their children amid the plethora of car payments, utility bills, insurance (car, home, health, teeth), ad nauseam. It almost appears like a conspiracy to keep many of us locked down and simply deal with money matters so we are not too concerned about what’s happening to people outside of our immediate concern.

But through it all, people do get involved in understanding important things like GMOs in our food. They will sign petitions that come across their computer screens or iPads or iPhones, understanding that they ought not to eat junk food (some are even talking about the old wise saying “let thy food be thy medicine”) and learning about Fukushima contamination, gardening with permaculture techniques, drought situations, financial takeovers, more pipeline legal hanky panicky are all read from sources that we respect.

But to return to chemtrails, or to use the more scientific term “geo-engineering,” that criss-crossing of trails in the sky that expand to become that milky haziness that you may see in the sky orchestrated and planned from airplanes spewing out aluminum particulates, barium, boron and other chemicals with the intention to reflect the solar rays back into space to give us some more time against intensifying climate change. And if you turned me off or have tuned me out so far I’d highly recommend that you read the report by the IPCC about how it is recommending that chemtrail/geo-engineering keep going with their spray, since they feel that it appears to be a viable way to curb climate change in comparison with the non-events at the various climate change global summits that often times simply do nothing (click here for details).

Just a note about the ridicule factor. Perhaps my mind has hardened over the decades but now I’m used to it. At one time I took all sorts of ridicule as personal attacks. I now take them in stride and in a way I’d better be able to take the ridicule since I have this rather strange proclivity toward studying and reporting on the unusual edges around consensus reality. You may call them fringes, but it all depends on how expansive and inclusive your mind can be. And especially in light of growing concern over more devastation, I sense that I personally need to go to and become more acquainted with those edges or fringes in order to find some real solutions since consensus reality is really not offering many viable solutions, unless they are forced to. As Einstein has said: “No problem can be solved from the same level of consciousness that created it.” I don’t think he declared any methodology how t shift that consciousness so we could absorb the solutions or even allow them into our consciousness.

Water catchment 20 years ago was considered fringe and now our city is giving people credit for installing water catchment devices. Eco-communities were fringe and now more and more people are aware of them and actually we have in this county two cohousing communities that have emerged decades ago and are doing quite well. Permaculture was at one time fringe and now very recently people are applying their strategies and techniques for their shelter, waste, water and garden areas in more harmony with nature rather than forcing an alien system on a natural system.

And community groups are now speaking of mulching, using waste for food production, using mycelia (mushrooms) to assist the soil, water catchment and a plethora of ideas now current that were once considered strange. Even green burials are now being discussed in wider circles rather than the popular and almost obscene process to eliminate the deceased body with pollutants and the incredible waste of energy. (Visit our calendar since we will be screening a film called A Will for the Woods on May 22.)

And on and on.

Some pioneering researchers are dropping other environmental concerns and focusing on chemtrails since they feel its more important than all the other ones. Even if we clean up other areas, if the government is in cahoots with spraying the sky under the guise of aiding in the climate change fiasco and no one is investigating them then what good are all the other concerns. It’s not just a matter of adding these chemicals to the soil after they fall from doing their work in the sky but also blocking the sun’s rays that are creating more vitamin D deficiencies (click here), as well as going deeper into the rabbit hole of weather modification (see Monsanto’s recent acquisition of a weather modification company for $1 billion (click here).

There is obviously a war out there (as well as internally). With all of the stresses of our speedy lives in the developed world, how do we choose how to spend our time on issues that are important to us: signing petitions, joining and supporting various political or environmental organizations, speaking out, organizing new alternative currency models, SlowMoney, Bioneers, writing letters to the editors, buying food that is certified organic (but if it’s being sprayed from above with particulates that are affecting our food, what can we do?).

“What can we do?” always seems to be the next question when challenged by some serious accusations or from a new emerging issue. Noam Chomsky once remarked in a documentary interview that he always had requests from the developed world as to what to do, while in the developing world he always heard from people who always knew what to do. Why is that?

After I focused on investigating a peculiar non-cold cough that I experienced and after some simple Google research it led me to chemtrails, coughing without having a cold was a symptom of many people who were claiming that it had to do with the overhead chemtrails. I put the information on my facebook wall and within days my wall got so inundated with resources and articles and video clips from “friends” that I decided to create a separate Facebook group that was entirely focused on chemtrails in SLO County.

Now after a month it has increased to more than 300 people who are signed in to learn more. When it came time to show the second film about chemtrails called LOOK UP! a number of us asked the APCD (Air Pollution Control District) to discover what they could tell us as well as inviting them to come to our film/dinner gathering. They simply told us that they don’t investigate what comes from the sky and that was that. And no one from the APCD accepted our invitation to our film gathering to answer questions.

To learn more or simply see what the concern is all about, look up, get curious and band together with others who are also trying to figure this out. Please join the Facebook page. Also the group is having a booth (No. 50) at the Earth Day festivities in SLO. See the information flier we created by clicking here.

— Bob Banner is publisher of HopeDance.org online and screens films nearly 10 times a month in SLO county and elsewhere, and provides a space where people can communicate their feelings, ideas and activities amidst the myriad of different edgy films. He can be reached at info@hopedance.org or 805.762.4848. The opinions expressed are his own.

7 Responses to Chemtrails in the Sky in San Luis Obispo