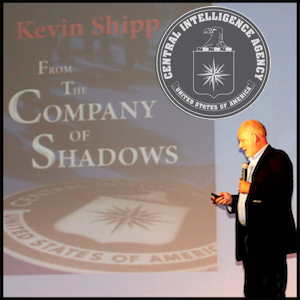 Kevin Shipp was a decorated CIA officer who refused to look the other way in regard to government criminality and cover-up. At a recent critical public awareness event in Northern California organized by GeoengineeringWatch.org, Mr. Shipp gave an extremely informative and compelling presentation on numerous horrific ongoing government crimes. The subjects Kevin Shipp addressed included climate engineering and the governments total persecution of anyone who dares to tell the truth about rampant government tyranny. Mr. Shipp's powerful presentation is below.

The paradigm we have all known has been built on deception and the dark agendas of the global power structure. The courage Kevin Shipp has shown by doing his best to expose government criminality and tyranny (detailed in Kevin's book "In The company Of Shadows) serves as a stellar example to all of us. We desperately need other individuals in government agencies and the US military to follow Kevin's lead . If we have any chance of stopping the completely out of control criminal cabal that currently runs our country and much of the world, we must all make our voices heard, we must all join the battle for the greater good.
DW

102 Responses to CIA Whistleblower Speaks Out About Climate Engineering