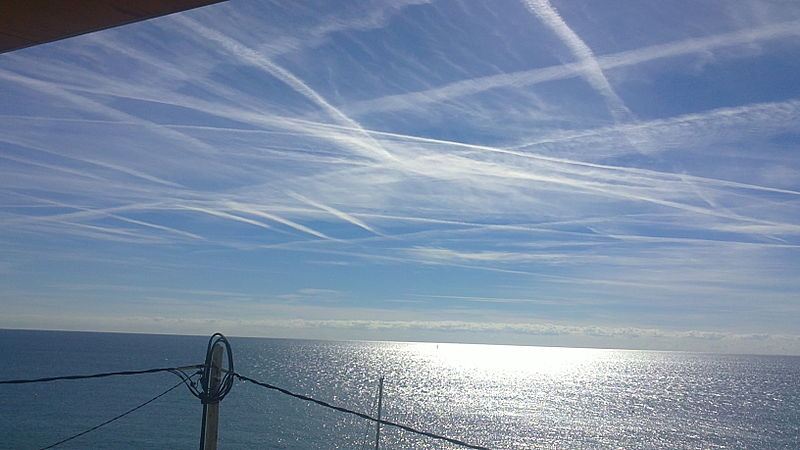 On 8 – 9 April a conference was held at the European Parliament, under the title “Beyond Theories of Weather Modification – Civil Society against Geo-Engineering”. The conference reassessed a 1999 resolution and lack from both the sides of legislators and military to safeguard transparency and democratic control over classified programs, which affect entire populations without consent, democratic influence, or access to verifiable information and data. Christof Lehmann (nsnbc).

The conference began on 8 April, with an official screening of the documentary “Why in the World are they Spraying ?” of the US-American filmmaker Michael Murphy.

The conference was held under the aegis of the parliamentary group “The Greens/European Free Alliance”, which is an alliance of European Green Parties and Liberal Parties.

Speakers at the conference included EU parliamentarians Tatjana Zdanoka from Lativia, who is a member of the Committee of Civil Liberties, Justice and Home Affairs, Werner Schulz from Germany, who is a member of the Committee on Foreign Affairs, Francois Alfonsi, who is a member of the Committee on Regional Development, the municipal councilor Linda Leblanc, who is the secretary of the Green Party of Cyprus, the former ambassador of the Ukraine in Greece and deputy president of the Green Party of the Ukraine, Valerie Tsybukh, Giulietto Chiesa, who is a former EU parliamentarian and the president of the “Alternativa” alliance, Wayne Hall from Greece, who is the coordinator of the website “Enouranois“, Josefina Fraile from Spain, who is an independent environmental research manager of the International Platform against Climate Modification “Skyguards“, as well as Claire Henrion from France, who is the president of the association ACSEIPICA, and others.

The conference was held as an outcome of the collaboration between civil society organizations, who were coming together under the international platform “Skyguards”, in collaboration with the “Alternative” alliance.

The primary objective of the conference was to continue the work that had been started in 1998 by the European Parliament´s Committee on Foreign Affairs, Security and Defence Policy, which culminated in the adoption of the “Resolution on the Environment, Security and Foreign Policy” on 14 January 1999, with Maj Britt Theorin as rapporteur.

Lack of Democratic Instruments, Democratic Rights and Transparency within the European Union.

What has happened since 1999 however, is that there has occurred a significant distribution of disinformation about the military´s atmospheric experiments, which indicates that well proven and highly effective techniques of social engineering by misinformation and by positioning concerned citizens as objects of ridicule have been implemented, along with European Union members governments consequent denial of the obvious, which is visible for everyone who observes the sky above Europe on a standard day.

The motion for a resolution was also ignored despite of the fact that evidence was presented at the conference of how the atmosphere of the Earth has become a terrain for experimentation, which is threatening public health, evidence for the clandestine spraying with substances of unknown composition and for undisclosed purposes.  Studies which have been part of the presented evidence have documented the increased presence of aluminium and other metals in the environment. So far, no peer reviewed studies about the long-term effect on human health and the environment have been published, while the spraying continues with increased intensity.

Lack of the most elementary precautionary principles. Both the 1999 and the 2013 conference condemned the sophisticated military activity which is being carried out in defiance of the most elementary precautionary principles. The conference also addressed new weapons systems which focus on the military use of the ionosphere, such as the HAARP program, based in Alaska, and its pendant near the Norwegian city of Troms and elsewhere.

The participants of the conference demanded, that the motion of 14 January 1999 be implemented, given the abundance of documentary evidence existing today, that underlines the seriousness of the problem. The conference participants emphasized, that the European Parliament has at its disposal the legal instrument of the parliamentary committee of inquiry and the demand was submitted, that such a committee be established without further delay.

Absent substantial public pressure or a catastrophic development however, even a parliamentary inquiry is unlikely to yield results which would protect the population from the effects of continued military experimentation. An acute lack of democratic instruments within the EU system, the delegation of important decisions to un-elected commissioners being one of them, the lack of the EU parliament and EU citizens influence over NATO led military activities being the other, and a general lack of transparency with regard to classified military operations in EU countries in general are only a few of the primary stumbling blocks for progress with regard to the question of geo-engineering and weather modification. That is, in spite of the fact that these operations or experiments may have a direct impact on the general population. Participants of the conference emphasized the need for public information and initiative.

Some of the speakers at the conference indicated, that they will attempt to draw the attention of the European public opinion to what they perceive as violation of European principles, as an attack on the environment and health of citizens, and as silence of complicity by concealment of extremely serious wrongdoing, involving legal and penal responsibility.

Beyond Theories of Weather Modification. Civil Society versus Geo-Engineering

Full Text of the Report.

Why in the World are the Spraying ( Full Length Documentary )