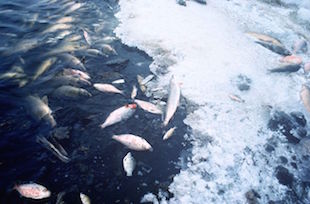 Fish are dying off all over the globe in bodies of fresh water and oceans. There are of course many underlying causes, but what part may the ongoing climate engineering contamination play in this equation? The eastern half of the US lower 48 states has been pounded with engineered "winter" storms over and over in recent years. A major part of the geoengineering process related to these storms is the artificial/chemical ice nucleation process. This process not only cools the temperatures down in a storm system and on the ground, the nucleating material also causes ice to form and remain on bodies of water often with water temperatures that would otherwise have been too high for ice to form and remain for extended times naturally. Climate engineering is contaminating precipitation around the globe, countless lab tests prove this. What effect is this contamination having on the chemistry of lakes and streams? The chemical ice nucleating material causes an endothermic reaction. What effect is this reaction having on lake and pond chemistry and available oxygen content? In regard to the particular fish kill documented in the article below, "official agencies" of course say what they always say, that there is nothing to worry about.  The role of such agencies is to pacify public concerns, actual investigation and telling the truth is not part of their equation, it never has been for them. If we want the truth to be known, it's up to all of us to expose it. Governmental agencies and mainstream media will continue to do everything in their power to hide what is unfolding around us all for as long as they can.
Dane Wigington
geoengineeringwatch.org

INDIANAPOLIS (WISH) — Some people living in the Geist Reservoir neighborhood are concerned after seeing dozens of dead fish popping up along the shore.

One neighbor says the problem started after the ice melted away. She says she comes across dead fish every winter but this year, it’s been ten times worse.

“It’s pretty disgusting,” said Teresa Williams, concerned resident. “A lot of them are kind of bloody at the gills.”

Teresa Williams has lived in the Bridge Water neighborhood for about 11 years. For the past week she says she’s been waking up to an unpleasant sight in her backyard.

“I’ve been picking up dead fish everyday, most days over 100 fish a day,” said Williams. “I think last year, I picked up 40 or 50 and the year before that similar amounts I always kind of count.”

The mother of three says she’s been picking up the fish and tossing them out so that her dogs won’t get to them.

“We all have those big republic trash bins and I have two of them and I filled them both to the top with dead fish. In fact, they were so heavy it was hard to pull them down the drive way,” said Williams.

But Geist Lake Coalition, a group addressing concerns of homeowners along the waterfront says there’s nothing to worry about.

They say the dead fish washing up are called shad. The fragile fish are more sensitive to cold water and lower oxygen levels than other species in the lake. The coalition posted an update to Facebook alerting residents of the fish kill.

“If a lot of fish other than shad start showing up dead, then we may want to be concerned. That said there are reports of a small bass die-off in a very limited amount,” said Brian Hall, founding director.

“Every summer there’s always a concern about so much toxic algae in the lake,” said Williams. “I just wonder if the amount of dead fish kill this year maybe had anything to do with that left over from the summer.”

Citizens Energy is the company in charge of Geist Reservoir.

A spokesperson tells 24-Hour News 8 it’s been a problem in the past with the algae because of the fertilization. She says there are many houses along the lake that some of the chemicals can get into the water.

The company says they have treated the reservoir in the past, but it’s all been safe and causes no harm to the fish and wildlife.

Citizens Energy is planning to hire a contractor to come out to the neighborhood to clean up the mess sometime next week.