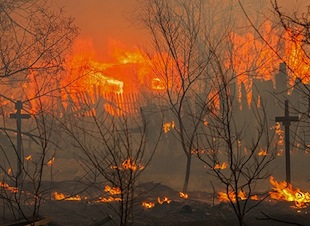 The vastness of Siberia is difficult to grasp. The importance of the boreal forests that exist there cannot be overstated. Such forests are the second largest source of oxygen production on the planet. The Siberian forests were once a carbon sink but have now become a massive carbon source due to the dying and burning of this expansive wilderness.This once frozen land is now burning with a fury that is completely unprecedented in any historical record. In recent years as much as 100,000,000 acres has gone up in flames annually. Regions that should be frozen solid till mid June are now smoke and ashes. Where are the mainstream media headlines on this? The global power structure will do everything it can to keep populations completely blind and oblivious to the converging catastrophes that are rapidly closing in on us all. All available data indicates climate engineering has played a major role in the die-off and incineration of Siberia. The article below and the short videos in it should be a sobering wake up call, we ignore the darkening horizon at our own peril.
Dane Wigington
geoengineeringwatch.org

"The Dry Land Burned Like Grass", Siberia's Road To A Permaburn Hell

(Residents of the Trans Baikal region of Russia flee through a raging permafrost fire on April 13 of 2015. Video Source: The Road to Hell Recorded by: Vladislav Igorevich.)

The script reads like a scene from some post-apocalyptic disaster film.

Frigid Siberia begins an epic thaw — a thaw set off by an unstoppable dumping of heat-trapping gasses into the atmosphere by human fossil fuel industry. Finally, after years of warming, the thawing land itself becomes fuel for fires. A thick layer of peat-like organic material that serves as kindling to the heat-dried trees and grasses atop it.

Immense blazes ignite in April — fully 100 days before the usual fire season in late July. The fires explode to enormous size, doubling in area in less than a day, covering scores to hundreds of square miles. Residents flee or face off against walls of raging flame in bucket and hose brigades. Military units descend on the regions affected to fight blazes and prevent looting. The fires are freakish, starting from nowhere at a moment’s notice. Eyewitnesses at the scene of one fire describe the surreal situation saying: “… the dry land burned like grass.”

(A wall of fire confronts residents of Chita, Russia this week as local townsfolk prepared to defend their homes and livelihoods from the inferno. Image source: The Siberian Times.)

But for two regions of Russia, that’s exactly what happened this week.

In Khakassia, a region of southern Siberia bordering Kazakhstan and Mongolia, massive blazes ripped through a broad permafrost thaw zone, impacting 39 villages, killing 29 people and leaving thousands homeless. By Thursday, many of these massive fires were finally extinguished — leaving miles wide scars over a smoldering and blackened land.

Hundreds of miles away in Trans Baikal, the story was also one of hellish inferno. There, wildfires erupted from the thawing permafrost zone — engulfing forests, burning dry land, destroying hundreds of homes in more than 9 villages, and killing four people. One wildfire alone surged to nearly 400 square miles in size and threatened numerous settlements near the city of Chita. There, locals are still fighting the blaze in a desperate effort to preserve life and property.

(Satellite image of fires and large burn scars in Chita, Russia on April 17 of 2015. For reference, bottom edge of frame is 120 miles. Note that some of the burn scars in this satellite shot stretch for 20 miles at their widest point. Image source: LANCE MODIS.)

In total, nearly 50 villages and towns have now been affected, 33 lives have been lost, four more have gone missing, nearly 7,000 people are now homeless, and more than 6,000 domestic animals have been lost to the fires. These are the first, early casualties in a fire season stoked by climate change that will flare off and on for at least the next five months. A fire season that will likely see immense plumes of smoke covering broad sections of the Northern Hemisphere, involve Canadian and Alaskan permafrost zones, and see wildfires burning all the way through Siberia to the shores of the Arctic Ocean.

And so we are just at the start of a long road through another hellish Arctic fire season, one enabled and made far, far worse by a current and very rapid rate of human-forced warming.

15 Responses to Formerly Frozen Siberia Is Exploding Into Flames