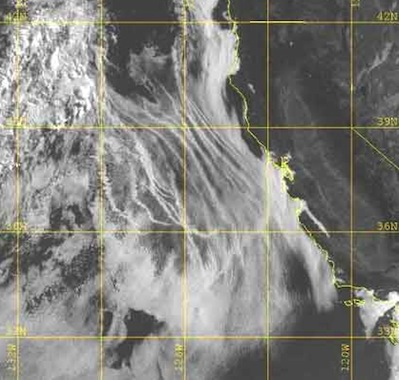 
Though many have now at least heard of the ongoing atmospheric spraying known as solar radiation management (SRM) and stratospheric aerosol geoengineering (SAG), most are still not familiar with another form of geoengineering, "ocean fertilization". It's easy enough for the average person to take note of the all too visible spraying of our skies, but how can we know what the climate engineers are doing to our oceans without our knowledge or consent?


Could the atmospheric spraying and ocean fertilization be directly connected? The answer is yes, a connection appears likely if all available data is examined. For those that are not familiar with ocean fertilization, the term refers to the intentional widespread distribution of bioavailable iron into our seas in order to create plankton blooms that then absorb and thus sequester Co2 from the atmosphere. Could the materials being sprayed into our skies and over the oceans be composed of elements that are compatible for ocean fertilization? Again, the answer is likely yes.

What Are They Spraying?


It has recently been suggested that coal ash is the primary material being used by the climate engineers. Though this theory may potentially be a part of the geoengineering equation, there are too many applications of climate engineering to conclude that a single source of material is being used. Aluminum is a known primary element showing up in many lab tests of precipitation around the globe, and is also named in numerous climate engineering patents. Immediately after two major global climate conferences in recent years, Cancun and Copenhagen, aluminum futures went up significantly. Did geoengineering get the go ahead for further ramp-ups of their programs at these conferences? Were deals made behind closed doors? It seemed someone was buying a great deal of aluminum just after these international climate conferences. 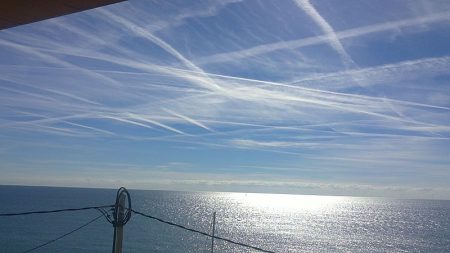 
In the case of ocean fertilization, bioavailable iron is the primary material needed. Is it possible that the toxic waste material from steel processing (called "slag") could be used for engineering our oceans? Have scientific studies been done to study using this industrial processing waste for ocean fertilization? Yes. Is this waste "slag" material toxic? Yes again. If we for the moment ignore the fact that iron slag is toxic, does ocean fertilization hold any potential benefit for the planet under any circumstances? Available independent studies say no. Any perceived benefit from Co2 uptake is far outweighed by the long list of consequences. Inspite of the known negative effects, there will always be those who attempt to profit from environmental devastation by trying to sell ocean fertilization as a "cure" to excessive Co2.


It appears very likely that the same global powers behind the ongoing atmospheric spraying insanity have also been "fertilizing" our oceans with the method of dispersion also used for solar radiation management, jet tanker spraying. The geoengineers can then create sun blocking (toxic) SRM clouds over the oceans and when this material settles out of the atmosphere it becomes ocean fertilization material. Could the spray mix that is being dispersed over the oceans also contain major amounts of aluminum in addition to other heavy metals? Yet again the answer is yes. In 2010 whales from around the globe were tested for heavy metals and the published report showed "jaw dropping" levels of aluminum and other heavy metals in their tissue. Since whales breath air, they are likely being contaminated by respiration and from the now contaminated food chain. Ship dispersion is also very likely a part of the ocean fertilization. The oceans are acidifying and dying. Massive dead zones in the seas are expanding around the globe, even shellfish are disappearing. Though there are many contributing factors, the capability for ocean fertilization to destroy ocean life should not be underestimated. If the oceans die, we die. All form of geoengineering are nothing less that an all out assault against all life on Earth. The fight to preserve life on our planet is not somewhere in the future, it is now. Educate yourself, arm yourself with credible data to pass on to others, and join the fight.

32 Responses to Geoengineering With Industrial Waste