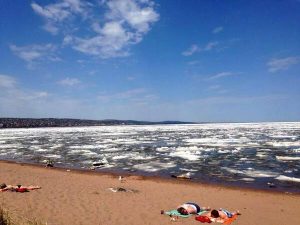 The mainstream media is trumpeting the fact that there is still ice in Lake Superior as of May 27 2014. This is the latest significant ice on record, but is there more to the story?

Some of those who ring the false “global cooling” alarm bell when they see a headline like the one above don’t acknowledge global climate engineering at all. In this case, one can understand their confusion if they are unaware of climate engineering or in denial about it . Others clearly recognize the massive climate engineering programs going on over our heads on a daily basis. People in this group generally accept the fact that artificial/chemical ice nucleation is going on, but then for some reason many are not connecting the chemical nucleation with stories like the one below. Hopefully this will change as more information is presented. So whats up with Lake Superior? In spite of record high air temperatures near the lake shores of 85 degrees, and water temperatures of 36 degrees (shown in the chart below for the date in question), the lake is still spotted with ice. 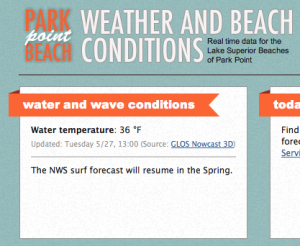 Strange fogs are also developing as shown in the video contained in the article below. As the chemical ice nucleation process was put into high gear last winter, the anomalous massive “ice balls” developed in the lake. This was yet another historically unprecedented phenomenon that the “experts” are trying to tell us is “normal”, though it is clear by their attempts to explain the oddity that the don’t really have a clue. 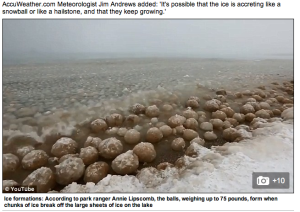 Artificial/chemical ice nucleation is the elephant in the room that few choose to recognize no matter how obvious the signs. The link below will make this point more clearly for any that are unfamiliar with artificial ice nucleation and its use in weather modification.
DW
https://www.geoengineeringwatch.org/chemically-nucleated-snow-what-is-it/

Duluth tied a record high with 85 degrees Monday. What happens when you take mid-80s and combine that with remnant ice chunks form the coldest winter in 35 years? Unusual sights on the the Scandinavian Riviera Sunday.

Thanks to MPR Weatherspy JP Rennquist for passing along the unusual shots from the North Shore.

The late season ice floes have cost Duluth area fishing charters some serious cash so far this spring. It’s just too dangerous to take the boats out in a sea full of heavy jagged ice chunks. Here’s the scene from the Duluth harbor entrance this morning.

(Much) Cooler by the lake

Winds shifted from off shore to onshore late Sunday afternoon along the lakefront in Duluth. That produced a dramatic, near instant temperature shock for those along the lakefront as the breeze blew off the still icy lake water. David M. Evaska felt the sudden chill.

My family and I drove from Saint Paul to Duluth for the Memorial Day weekend where we experienced an amazing weather phenomenon. We were walking on the boardwalk by the lift bridge off Canal St. Sunday afternoon around 6 p.m. I believe, it was hot near or above 80s by my estimation everyone was wearing shorts, tank tops and sandals definitely summer attire as the temps warranted.

There is still ice on the lake and there was a mild breeze coming on shore, nothing spectacular, but within 10 seconds the temperature dropped from near 80 to 40 or 50 degrees F. I am very curious if you have data that would confirm what I and everyone on shore in Duluth felt this last Sunday afternoon.

It happened so fast an was so drastic that it made my body shudder. Is there a name for this? I read about a rapid and drastic temp change in Duluth in the past could this have rivaled that?

A gentleman who was walking near my family said that he had never experienced a temperature change like that in Duluth before! I was amazed but now I’m just curious. If you have any answers or know of where I could search for them I would be appreciative.

David, I have no doubt the magnitude of what you and others felt along Lake Superior this weekend was rare. I don’t know if it’s a record for the fastest temp drop in Minnesota, but it may be close.

Data from Sky Harbor Airport at the Lakefront shows temps dropped 25 to 30 degrees in just minutes. It’s quite possible the temperature plunge was more sudden and dramatic at your location.

The contrast between icy lake and summery air masses are causing some unusual sights on the great lakes this spring. Here’s a great video of a dense fog bank rolling in on the lake breeze in Michigan.

Duluth enjoys another day of cooler by the lake today.