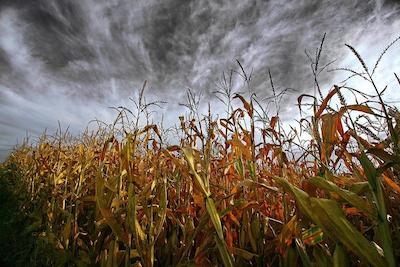 The more we learn about the toxic soup the power structure has immersed us all in, the more astounding it is that any of us still have even a shred of health left.  "Synergistic toxicity" is what happens when two elements that are already toxic become much more toxic when combined. Studies show this is the case when Monsanto's "Roundup" is combined with aluminum. The ongoing climate engineering programs are raining down huge amounts of aluminum (and other toxic metals and chemicals) on the entire surface of the planet which is being absorbed by all life forms. Now let's add more toxins to the mix, how much of our food supply is being exposed to Monsanto's "Roundup" chemical concoction? Yes, Monsanto has "Roundup ready crops" that are genetically engineered to resist the the toxic Roundup brew. This means farmers can spray all the Roundup they want on crops without harming their harvest, but what about us? A small circle of power brokers are quite literally "slow killing" us all from too many directions to quantify. How can this happen? Because of the abysmal complacency of populations that have so far not taken a stand. Once the masses fully realize their former reality is over, and why, the awakening will commence in earnest. It's up to all of us that are already aware to help awaken others. The article below will shed more light on the Monsanto/aluminum synergistic toxicity.
Dane Wigington
geoengineeringwatch.org

Glyphosate Could Combine With Aluminum To Increase Neurological And Gut Flora Issue.

​It's no secret that mention of the word glyphosate angers many health-conscious people, while those affiliated with Monsanto, makers of Roundup, stand by their product.

Although numerous data show that the main ingredient in the commonly used weedkiller can wreak havoc on health, Monsanto-loyal folks says it's safe. They maintain this position despite the fact that glyphosate, which is sprayed on millions of acres of crops, has been linked to everything from fertility issues to autism.

One study, published in Entropy, notes that its "[n]egative impact on the body is insidious and manifests slowly over time as inflammation damages cellular systems throughout the body."(1)

Its author, Dr. Stephanie Seneff, is the same person who co-authored a more recent study that hones in on the health problems caused by glyphosate. However, this latest study digs even deeper, making a strong case that glyphosate and aluminum, an environmental toxin which is also very prevalent in society, work together to deliver a double-whammy to brain and gut health.

Seneff, a research scientist at the Massachusetts Institute of Technology, and her team examined the role that both toxins play in affecting the pineal gland. They explain that the pineal gland is very susceptible to environmental toxins and, when exposed to them, is prone to a range of neurological diseases including autism, Parkinson's disease and anxiety disorders.

Furthermore, they found that both glyphosate and aluminum work together in ways that destroy healthy gut flora. The study, which was published in Agricultural Sciences, states, "Glyphosate disrupts gut bacteria, leading to an overgrowth of Clostridium difficile. Its toxic product, p-cresol, is linked to autism in both human and mouse models. p-Cresol enhances uptake of aluminum via transferrin."(2)

As a result of this uptake, anemia develops and hypoxia results. Hypoxic stress is linked to premature death and an increased risk of developing autism. The study links hypoxia to autism, and since aluminum plays a role in this process — which occurs when glyphosate worsens gut health in the first place — the conclusion is that the combination of both toxins can have devastating health consequences.(2)

Glyphosate chelates aluminum, allowing ingested aluminum to bypass the gut barrier. This leads to anemia-induced hypoxia, promoting neurotoxicity and damaging the pineal gland. Both glyphosate and aluminum disrupt cytochrome P450 enzymes, which are involved in melatonin metabolism. Furthermore, melatonin is derived from tryptophan, whose synthesis in plants and microbes is blocked by glyphosate.(2)

Once again, a strong case that environmental toxins are detrimental to physical and mental health

[W]e have developed the argument that glyphosate, the active ingredient in the herbicide, Roundup, and aluminum, a pervasive toxic metal in our environment, operate synergistically to induce dysfunction in the pineal gland leading to the sleep disorder that is characteristic of multiple neurological diseases, including autism, ADHD, depression, Alzheimer's disease, ALS, anxiety disorder and Parkinson's disease.(2)

Glyphosate, as most of us are aware, is a widely used chemical in the agricultural industry. Unfortunately, in addition to the health issues already mentioned in this article, it's also linked to other problems including diarrhea, weight loss, sleepiness and kidney toxicity.(3)

When it comes to aluminum toxicity, symptoms include speech problems, bone deformities, weakness and muscle pain. The serious complications that could result from such toxicity are disruptions in the nervous system, lung problems, anemia and brain disorders. A variety of tests such as bone biopsies and tests for stool, blood and urine health can be conducted to better assess whether someone has aluminum toxicity, something that is strongly linked to the use of deodorants and antacids containing the metal.(4)

17 Responses to Monsanto’s “Roundup” And Aluminum, A Deadly Combination