More exceptional warmth on the way for the Eastern U.S. during Christmas week 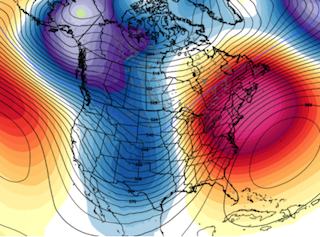 The Eastern United States is just coming off a December “heat wave” . But don’t get too comfortable in your winter coats — another warm-up is expected to peak in the days around Christmas, and it, too, has the potential to topple records.

But this cool pattern will not last. The (brief) cool-down coming this weekend for the Eastern U.S. (weatherbell.com)

Starting Monday, forecast models are predicting the pattern will flip back to what we’ve become so accustomed to this month: a warmer than average East and a cooler than average West.

[The calendar says December but these flowers could not care less]

“Storm systems are forecast to track towards the Great Lakes region,” said Wes Junker, the Capital Weather Gang’s winter weather expert. “Because the flow around storms is counterclockwise, the deep southerly flow to the east of the storms will deliver warm air with southern origins.”

[November was warmest such month on record by a huge margin] Given the agreement among models — and added certainty with a very strong El Nino continuing in the Pacific — NOAA’s Climate Prediction Center is forecasting a 90 percent chance that temperatures will be above average in the second to last week of December, with “above average” chances that the warmth will continue through the first week of January.

While models were homing in on the Midwest for exceptional warmth in the first half of December, the Mid-Atlantic and Northeast appear to be the targets for the last two weeks of December. Temperatures in the Mid-Atlantic have already been running well above average this month, and the final warm punch could break records for warmest December. “Temperatures could again flirt with records in some locations unless clouds and or fog help to hold them down,” Junker said. Forecast highs in New York City are in the mid to upper 60s in the days around Christmas. In Raleigh, N.C., highs in the mid-70s are possible.

At Reagan National Airport, D.C.’s official climate monitoring station, the average temperature through Dec. 14 was 50 degrees, more than eight degrees above average. The record warmest December was 45.6 degrees, which was tied between 1889 and 1984, this month will challenge that record thanks to the very warm head-start and the potentially extreme temperature rebound next week. Temperatures are forecast to run up to 30 degrees above average on Dec. 24 and 25, shown here in degrees Celsius. (weatherbell.com)
Source: Washington Post

One Response to More exceptional warmth on the way for the Eastern U.S. during Christmas week