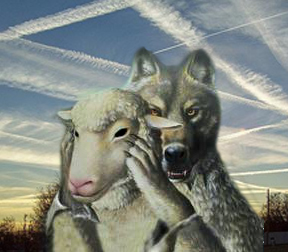 In this video the most internationally recognized “geoengineer” of all, David Keith, does his best to sell us on just how easy and inexpensive it would be to “geoengineer” the planet. For those that have done any research on the subject of global geoengineering, three possibilities come to mind in regard to David Keith. He is either legally blind, clinically insane, or nothing more than a paid stooge. Having met and questioned him, it is my opinion that the last two factors are virtual certainties.

In the interview below, Keith indicates there is currently no geoengineering going on, a blatant lie. He goes on to state that only two private jets could spray enough sulfur to compensate for global warming. Again, Mr. Keith is either living in an alternate reality, or he is doing exactly what he is paid to do, lie.

First, why has he abandoned his push for using aluminum for geoengineering? Is it because it has finally been pointed out to him that the well known toxic effects of aluminum would not be a good selling point for these programs as far as the public is concerned?

Next, two small private jets would do it? This is a far cry from the Keith’s proposal to put some 20,000,000 tons of aluminum into the atmosphere annually which is what he proposed at the AAAS conference in San Diego Ca, Feb 2010. I know what he said, I was there.

Finally, he would have to be legally blind not to notice the countless military tankers and commercial aircraft spraying the hell out of our skies 24/7. He would have to be living in a cave not to know that the latest figures on “global dimming” are fully 22%. This means that already 22% of the suns direct rays are not reaching the surface of the planet due to the toxic heavy metal haze that surrounds earth due to the constant spraying from thousands of jet aircraft.

Has the planet stopped warming? No, and all available data indicates that the massive spray programs are making the situation much worse, not better.

They are not spraying? Really? And only two small jets could fix all our problems? Shouldn’t it shock the hell out of us that David Keith is a professor at Harvard and the worlds’ most recognized geoengineer?

Government agencies and the “educational” institutions they control are little more than paid liars and propagandists. Its time to wake up before there is nothing left of our planet to salvage.

The linked video below is worth the time to view. It is a truly shocking example of blatant lies and unbridled arrogance.

22 Responses to The Geoengineering Salesmen