The Human Race Is Descending Into Extinction: A Former Reagan Cabinet Official Speaks Out 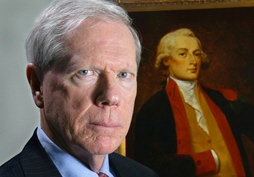 Dr. Paul Craig Roberts was Assistant Secretary of the Treasury for the Reagan administration. Mr. Roberts has constantly been an outspoken voice of facts and reason in an increasingly chaotic and criminal world run by global powers that are unarguably completely out of control. About 4 weeks before the article below was released, I communicated with Dr. Roberts on the issue of global geoengineering (as I am sure some others have also). I expressed to him that his voice would bring great credibility to the cause of raising public awareness on the critical climate engineering issue. Though he stated his reluctance to address the subject as it was not his area of expertise, true to his courageous character, Dr Roberts put out the article below which covered the climate engineering issue (along with other critical subjects) shortly after our exchange.
Dane Wigington
GeoengineeringWatch.org

Ignored Reality Is Going To Wipe Out the Human Race

To inform people is hard slugging. Everything is lined up against the public being informed, or the policymakers for that matter. News is contaminated by its service to special interests and hidden agendas. Many scientists or their employers are dependent on federal money. Even psychologists and anthropologists were roped into the government’s torture and occupation programs. Economists tell lies for corporations and Wall Street. Plant and soil scientists tell lies for agribusiness and Monsanto. Truth tellers are slandered and persecuted. However, persistence can eventually win out. In the long-run, truth sometimes emerges. But not always. And not always in time.

I have been trying to inform the American people, economists, and policymakers for more than a decade about the adverse impacts of jobs offshoring on the US economy. The word has eventually gotten out. Last week I was contacted by 8th grade students competing for their school in CSPAN’s StudentCam Documentary Contest. They want to interview me on the subject of jobs offshoring for their documentary film.

America is a strange place. Here are eighth graders far ahead of the economics profession, the President, the Congress, the Federal Reserve, Wall Street, and the financial press in their understanding of one of the fundamental problems of the US economy. Yet, people say the public schools are failing. Obviously, not the one whose students contacted me.

Is it too late? I know much, but not all. So this is not the final word. I think it might be too late. When skilled jobs are sent abroad, the skills disappear at home. So do the supply chains and the businesses associated with the skills. Things close down, and abilities are lost. Why take a major in college for a job that is offshored. A culture disappears.

When First World wages drop, mortgage, car, credit card, and student loan payments do not drop. Americans cannot live on Chinese, Indian, and Indonesian wages. Once the technology and know-how is transferred, the low wage country has the advantage in the absence of tariff protection.

For America to revive, our economy would have to be walled off with high tariffs, and subsidies would have to be provided in order to recreate US industry and manufacturing. But many corporations now produce offshore, and America is broke. The government has been $1 trillion dollars in the hole each year for the last 5 years.

Jobs offshoring diminished the US tax base. When a job is sent abroad, so is that job’s contribution to US GDP and tax base. When millions of jobs are sent abroad, US GDP and tax base cannot support government spending levels. To the extent that there are any replacement jobs, they are in lowly paid domestic services, such as waitresses, bartenders, retail clerks, and hospital orderlies. These jobs do not provide a tax base or consumer spending power comparable to manufacturing jobs and tradable professional services such as software engineering and information technology.

Republicans and increasingly Democrats, as both parties are dependent on the same sources of campaign contributions, blame “entitlements.” By entitlements they mean welfare.

In fact, entitlements consist of Social Security and Medicare. Entitlements are funded by the payroll tax, approximately 15% of payroll. The fact that a person pays the payroll tax all his working life is why the person is entitled to Social Security and Medicare if they live to retirement age. Welfare, such as food stamps and housing subsidies, are a small part of the federal budget and are not entitlements.

The Federal Reserve could not care less about the US population. The Fed was established for the purpose of protecting and aiding banks. Currently, the Fed, as if America were a Banana Republic which America appears to be becoming, is printing one thousand billion dollars per year in order to support the banks and to finance the federal deficit.

As bad as this is, it is minor compared to the destruction of the planet’s environment. Online information shows that the Gulf of Mexico ecosystem is in crisis after the BP spill and use of Corexit, a dispersant used to hide, not clean up, the spilled oil. http://www.opednews.com/articles/Gulf-ecosystem-in-crisis-a-by-Dahr-Jamail-Corporation-BP_Ecosystems_Gulf-Oil-Spill-Disaster_Gulf-Shrimping-Industry-131020-15.html

The Fukushima catastrophe has hardly begun. Yet already the radioactive water pouring into the Pacific Ocean has made fish dangerous to eat unless a person is willing to accept a higher risk of cancer.

Fukushima has the potential of making Japan uninhabitable and of polluting the air, water, and soil of the US with radioactivity. Yet the crisis is seldom mentioned in the US media. In Japan the government just passed a law that could be used to imprison Japanese journalists who report truthfully on the dire situation.

Take the time to familiarize yourself with the online information about Fukushima.. According to the presstitute media, Americans face threats from Iran and Syria and from whistleblowers such as Edward Snowden. The real threats are simply not in the news.

If you search Fukushima, you will find information that the presstitute media hides from you. See for example, http://www.globalresearch.ca/28-signs-that-the-west-coast-is-being-absolutely-fried-with-nuclear-radiation-from-fukushima/5355280

There are a number of other threats to the environment on which our lives depend. One is the effort to extract more productivity from the soil by use of GMOs. Monsanto has altered the genes of several crops so that the crops can be sprayed with RoundUp to eliminate weeds. The results have been to deplete the soil of nutrients, to destroy the micro-biology of the soil so that new plant diseases and funguses are activated, and to produce superweeds that require heavier doses of the glyphosate in RoundUp. The heavier dose of RoundUp worsens the aforementioned problems. US agricultural soil is losing its potency.

Now we come to chemtrails, branded another “conspiracy theory.” http://en.wikipedia.org/wiki/Chemtrail_conspiracy_theory However, the US government’s efforts to geo-engineer weather as a military weapon and as a preventative of global warming appear to be real. The DARPA and HAARP programs are well known and are discussed publicly by scientists. See, for example, http://news.sciencemag.org/2009/03/darpa-explore-geoengineering Search Chemtrails, and you will find much information that is kept from you. See, for example, http://www.globalresearch.ca/chemtrails-a-planetary-catastrophe-created-by-geo-engineering/5355299 and https://www.geoengineeringwatch.org

Some describe chemtrails as a plot by the New World Order, the Rothchilds, the Bilderbergers, or the Masons, to wipe out the “useless eaters.” Given the amount of evil that exists in the world, these conspiracy theories might not be as farfetched as they sound.

However, I do not know that. What does seem to be possibly true is that the scientific experiments to modify and control weather are having adverse real world consequences. The claim that aluminum is being sprayed into the atmosphere and when it comes to earth is destroying the ability of soil to be productive might not be imaginary. Those concerned about chemtrails say that weather control experiments have deprived the western United States of rainfall, while sending the rain to the east where there have been hurricane level deluges and floods.

In the West, sparse rainfall and lightning storms without rain are resulting in forests drying out and burning down. Deforestation adversely affects the environment in many ways, including the process of photosynthesis by which trees convert carbon dioxide into oxygen. The massive loss of forests means more carbon dioxide and less oxygen. Watershed and species habitat are lost, and spreading aridity further depletes ground and surface water. If these results are the consequences of weather modification experiments, the experiments should be stopped.

In North Georgia where I spend some summers, during 2013 it rained for 60 consecutive days, not all day, but every day, and some days the rainfall was 12 inches–hurricane level–and roads were washed out. I received last summer 4 automated telephone warnings from local counties not to drive and not to attempt to drive through accumulations of water on the highways.

One consequence of the excess of water in the East is that this year there are no acorns in North Georgia. Zilch, zero, nada. Nothing. There is no food for the deer, the turkeys, the bear, the rodents. Starving deer will strip bark from the trees. Bears will be unable to hibernate or will be able only to partially hibernate, forced to seek food from garbage. Black bears are already invading homes in search of food.

Unusual drought in the West and unusual flood in the East could be coincidental or they could be consequences of weather modification experiments.

The US, along with most of the world, already had a water problem prior to possible disruptions of rainfall by geo-engineering. In his book, Elixir, Brian Fagan tells the story of humankind’s mostly unsuccessful struggle with water. Both groundwater and surface water are vanishing. The water needs of large cities, such as Los Angeles and Phoenix, and the irrigation farming that depends on the Ogallala aquifer are unsustainable. Fagan reminds us that “the world’s supply of freshwater is finite,” just like the rest of nature’s resources. Avoiding cataclysm requires long-range thinking, but humanity is focused on immediate needs. Long-range thinking is limited to finding another water source to deplete. Cities and agriculture have turned eyes to the Great Lakes.

Los Angeles exists because the city was able to steal water from hundreds of miles away. The city drained Owens Lake, leaving a huge salt flat in its place, drained the Owens Valley aquifer, and diverted the Owens River to LA via aqueduct. Farming and ranching in the Owens Valley collapsed. Today LA takes water from the Colorado River, which originates in Wyoming and Colorado, and from Lake Perris 440 miles away.

Water depletion is not just an American problem. Fagan reports that “underground aquifers in many places are shrinking so rapidly that NASA satellites are detecting changes in the earth’s gravity.”

If the government is experimenting with weather engineering, scientists are playing God when they have no idea of the consequences. It is a tendency of scientists to become absorbed by the ability to experiment and to ignore unintended consequences.

Readers have asked me to write about Fukushima and chemtrails because they trust me to tell them the truth. The problem is that I am not qualified to write about these matters with anything approaching the same confidence that I bring to economic, war and police state matters.

The only advice I can give is that when you hear the presstitute media smear a concern or explanation as “conspiracy theory,” have a closer look. The divergence between what is happening and what you are told is so vast that it pays to be suspicious, cynical even, of what “your” government and “your” presstitute media tell you. The chances are high that it is a lie.

34 Responses to The Human Race Is Descending Into Extinction: A Former Reagan Cabinet Official Speaks Out