The Outside And The Inside 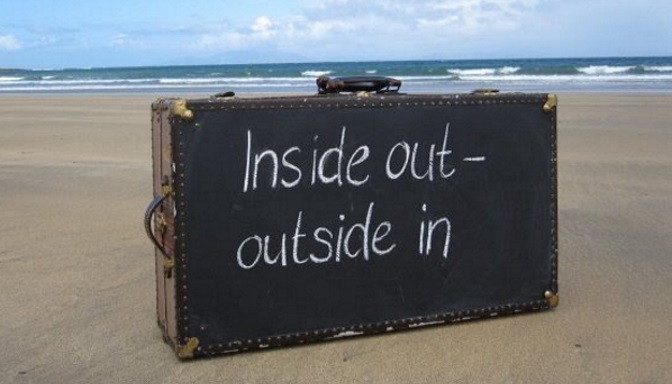 We’re all outsiders and insiders in various respects. Social circles, generally speaking, are just one aspect but they often affect us to drastic degrees. Acceptance by others and needing a sense of “belonging” are strong driving forces in most people’s lives. Sometimes these coincide with our need for a sense of purpose, but often what ultimately drives our heart can alienate us from previous surroundings as we progress through life.

I know for myself my close acquaintances that I still resonate with have narrowed down drastically, but then again I’ve had several drastic shifts. But this has always been the case in my life, with each new paradigm dissolution or correction, as many have experienced. Going through what appears to be loneliness in taking a new direction and leaving the old life behind is a precious opportunity. In most cases we don’t see that as the case when we’re younger and learning about this earthly place and getting knocked around by this mechanistic matrix, but we get the hang of it as life progresses.

Social conditioning and group consciousness are weird things to integrate and fully grasp, and often even individual changes are part of a larger shift and new “collectives” form outside the old ones with new awarenesses arising. These then gain their own group characteristics which in turn are broken out of in various ways, sometimes shifting the “group” think and status, and sometimes birthing another potential tectonic shift in awareness.

What’s evident in most collectives is the formation of new sets of stated or unstated control mechanisms, mores, and regulations for a host of reasons. Religions are a great example, how a system with the stated intention to liberate and empower actually becomes a highly controlled diversion from real truth, giving the illusion of freedom. So called “democratic” governments are the same.

How we allow these encrusted, paralytic structures to do what they do is a massive subject, but we essentially draw these upon ourselves as a personal extension of our own lack of awareness of ourselves. We can be free, and are, at any and all given times, yet we succumb to external control for a wide variety of reasons. These are fundamentally driven by fear – a literal fear of freedom, of what we consider to be the “unknown”, because it directly implies taking responsibility. This can be largely driven by fear of scarcity – being without our basic needs for food, shelter and community. As long as that’s the driving force, humanity is a sitting duck for anyone seeking to manipulate the controls in any way possible.

The amazing and wondrous truth underlying any social system is that any and all control mechanisms can be easily thrown off in a heartbeat by not falling for the illusion of fear. Fear is another huge subject as it permeates so many of our mental and emotional mechanisms and eludes recognition for what it is, being so deeply woven into the lower vibrational human fabric and our fascination for it which can lure us in without our realizing it.

Are You a True Outcast?

If so, treasure it. In fact cherish it. There’s freedom there. You don’t want to be “accepted” or on the inside of any confinement system in this low dimension. In fact, just about everything we experience in this realm of limitation is a potential trap, no matter how innocuous anything may seem. Anything that limits or even hints at conditions and restrictions, watch out. If it encloses, encircles, is conditional and draws unnecessary boundaries, it’s not your friend and it’s time to make tracks outta there.

It’s just another control system within the overarching control matrix, no matter how cleverly disguised. We draw these conditions upon our unawakened selves. Layers upon layers of them. But we’re getting there as we work our way out of the cocoon we were born into and our wings of truly awakened flight develop.

Once we bend to conformity we’ve lost our edge. Living truly consciously is an open agreement to be freewheeling together, which is a whole different “story”. That’s when what’s essential connects us and remains the focus. Otherwise any and every new normalcy bias will take control, pick up on social as well as negative spiritual rules and “norms”, and quash true freedom of expression individually and collectively. Just look how imagination is treated like a fanciful flight into fantasy, when it’s actually our highest expression of creativity.

Being your true individual heart-led self might seem to be “lonely” at first but just give it time. A whole new world will open up to you. The seeming loss of old, restricting and conditional acquaintances and surroundings is a small price to pay to explore the boundless nature of existence.

So why do such an “uncomfortable” thing as to be your true sovereign self? It depends on where your head and heart are at and what your priorities are. What’s more important to you? Truth, or comfort just surviving in someone else’s construct, group or otherwise? We live in our own shadows or that of others when we could be basking in the light, if we’re willing to step out. Aren’t you tired of the same old stories, including your own? It’s not that hard, it just takes a little honesty with yourself and you’re off and running. But don’t stop. There’s always new enclosures seeking to trip you off into another new construct.

It’s fear that keeps us confined. Fear of many things, most of which are intensely reinforced by this group agreement called society. And fear is all based on lies, complete lies. It’s more obvious by the day that the world doesn’t need to be the way it is, yet the personal implications of our own responsibility regarding this group projection continue to escape most.

The wonderfully empowering reality is that as we honestly pursue truth these energizing and liberating dynamics take hold no matter what. Truth is not popular, especially when it touches on cherished beliefs or sensitive personal issues. It’s very painful at first, even though it liberates the true essence of who we truly are.

No worries, it only means constant change. And wow, the worlds that open up are beyond comprehension!

Stay on the outside. The infinite knows no boundaries.

“Being an outsider to some extent, someone who does not “fit in” with others or is rejected by them for whatever reason, makes life difficult, but it also places you at an advantage as far as enlightenment is concerned. It takes you out of unconsciousness almost by force.”   -Eckhart Tolle

One Response to The Outside And The Inside