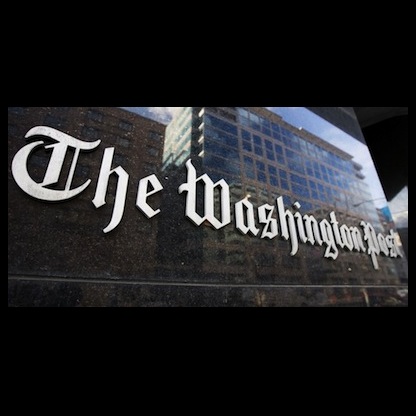 Share1.5K
Tweet
+1
Share
Pin1
1.5K Shares
The Washington Post has now addressed the climate engineering issue, the weather warfare assault in our skies is becoming all but impossible to hide. As our collective reality continues to rapidly deteriorate, many are beginning to look around and some are finally looking up. Blue skies are now a rare site as the all out aerosol spraying bombardment continues to increase around the globe. Though The Washington Post used the usual mainstream media terms like "conspiracy theory", all things considered this article is a giant leap forward for the cause of exposing the climate engineering insanity. The reporters at The Washington Post certainly had an uphill battle in getting this article even accepted for print, my sincere gratitude to them for their efforts. We are nearing critical mass of awareness regarding global geoengineering, those that wish to further the strides made with this article should take the time to click the "original source" link, and then comment under the article. Let's make our voices heard more than ever before.
Dane Wigington
geoengineeringwatch.org 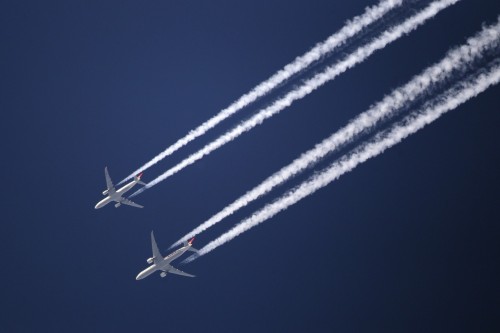 Two commercial airliners appear to fly close together as the pass over London on March 12, 2012 in London, England. (Photo by Dan Kitwood/Getty Images)

As governments’ efforts to cut greenhouse-gas emissions continue to sputter, some researchers have discussed another possible tool for combating climate change: “geoengineering” the climate. One particular form of it, “solar geoengineering,” would involve reflecting sunlight away from the Earth to reduce future warming, possibly by deploying an army of mirrors or spraying the air with reflective aerosols that would function like a chemical sunscreen.

But as it turns out, some people believe that a global campaign is already underway to have aircraft spray the air with chemicals — whether to control climate change or for other, more sinister purposes.

Meet the “chemtrails” crowd, who posit that governments, scientists and other institutions are using airplanes’ “chemtrails” — basically contrails that are allegedly laced with chemicals — to alter the climate, create extreme weather, poison people, or even control our minds. The chemtrails movement has gained a small but passionate following on the Internet, with people across the ideological spectrum — from left-wingers worried about the environment to right-wingers concerned about abuses of government power. We don’t know the size of the community, but followers generally point to seeming irregularities in aircraft contrails as indisputable proof that illicit weather or climate modification is already happening, right now, and being used to control people and nations, especially poor ones. Chemtrails activist Dane Wigington, for instance, points to videos of an airplane spewing out multiple exhaust trails of different lengths, or airplanes spewing trails of different colors. “This amounts to weather warfare — period,” he charges.

As farfetched (and baseless) as these claims may be, a recent scholarly analysis of the chemtrails movement suggests we can’t write off its relevance entirely — not because its proponents are right, but because of the insights they may offer about a future debate over geoengineering. It might be many years, after all, before any geoengineering proposal seriously enters the policy realm. Still, writes science and technology policy researcher Rose Cairns of the University of Sussex in The Geographical Journal, “Ignoring or dismissing these discourses out of hand as pathological or paranoid is to ignore potentially revealing insights about the emerging politics of geoengineering.”

Solar geoengineering — more formally known as solar radiation management (SRM) — is merely an idea right now, and many scholars aren’t convinced that it’d actually be worth it. But with the National Research Council set to weigh in on various forms of geoengineering very soon, it — and the conspiracy theories involving it — stands to gain more of the public spotlight.

There’s no evidence that the alleged chemtrails are any different than normal contrails, much less that thousands of scientists, companies and bureaucrats have engaged in a global conspiracy that they’ve managed to keep secret this whole time. But the more general concerns that chemtrails believers have about technology’s potential impacts on the climate and the environment, and about government and institutional power, shouldn’t be dismissed so easily, Cairns suggests.

Agreeing with Cairns, SRM researcher David Keith of Harvard University argues that we can’t simply dismiss the concerns that drive this emotionally charged movement. “The strength of the concern about chemtrails no doubt reflects very real and much more widespread concerns about high-leverage [technologies] in general, and about solar geoengineering in particular,” he explained in an email.

Environmental concerns could naturally become central to any mainstream debate over whether to actually use aerosols to undertake SRM. Some scientists have suggested that putting additional aerosols in the air could increase deadly air pollution or damage the ozone layer. It also wouldn’t address emissions of the most important greenhouse gas, carbon dioxide. Thus, not only would it do nothing to slow down CO2-driven ocean acidification; it also would mean that if you were ever to stop injecting aerosols into the air, global warming would resume — and quickly.

Then there are more-general political concerns; chemtrails activists may simply not trust institutions, particularly on a global scale. Cairns notes that the chemtrails discourse seems to resonate with elements of both the right and left wings, albeit for different reasons. Adherents on the left worry about the potential for corporations and other institutions to use chemtrails to harm people and the environment. On the right, meanwhile, are those who worry about individual freedoms and state power or dispute the idea that humans are changing the climate.

She argues that these issues of trust aren’t entirely irrational or paranoid and could easily manifest in mainstream debates over geoengineering. “Is it necessarily more irrational to believe that the climate is being controlled, than to believe that one can control the climate?” Cairns asks.

Nor should we ignore the chemtrails activists themselves. For the longest time, researchers were aware of the chemtrails narrative, but it hadn’t received much attention in the academic literature. Keith hopes that’s about to change. “I have been urging academic researchers to pay some attention to chemtrails and I am very glad that Rose did so,” Keith says.

Unfortunately, Cairns suggests, the potential for the geoengineering research community to publicly engage with chemtrails activists “appears limited” — they may simply not be receptive. As she argues, chemtrails believers’ longtime distrust of the alleged conspirators has reached outright disgust — to the point where unbelievers are labeled as paid liars (or even “mentally retarded,” as she quotes one chemtrails activist).

A very tiny subset of the chemtrails activists could have a more chilling effect on the field of geoengineering, Keith worries. He notes that he continually receives nasty emails and voice messages from chemtrails believers, and he has even received multiple threats of violence that have prompted him to contact the police.

In short, chemtrails itself is a conspiracy theory. But the environmental and political concerns underlying the theory can’t be ignored, as they certainly would arise in any mainstream debate over whether to proceed with geoengineering. And chemtrails believers themselves could become a thorn in geoengineering researchers’ and proponents’ sides for many years to come.