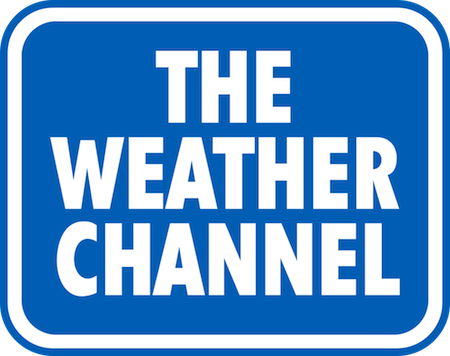 Several years ago the first “reality shows” started showing up on the TWC. Perhaps this does not seem like a big deal to some, but for those of us that are weather enthusiasts, when we want the weather, we want the weather. Many do not support “The Weather Channel/Reality Show Channel”, but it seems we no longer have a choice. 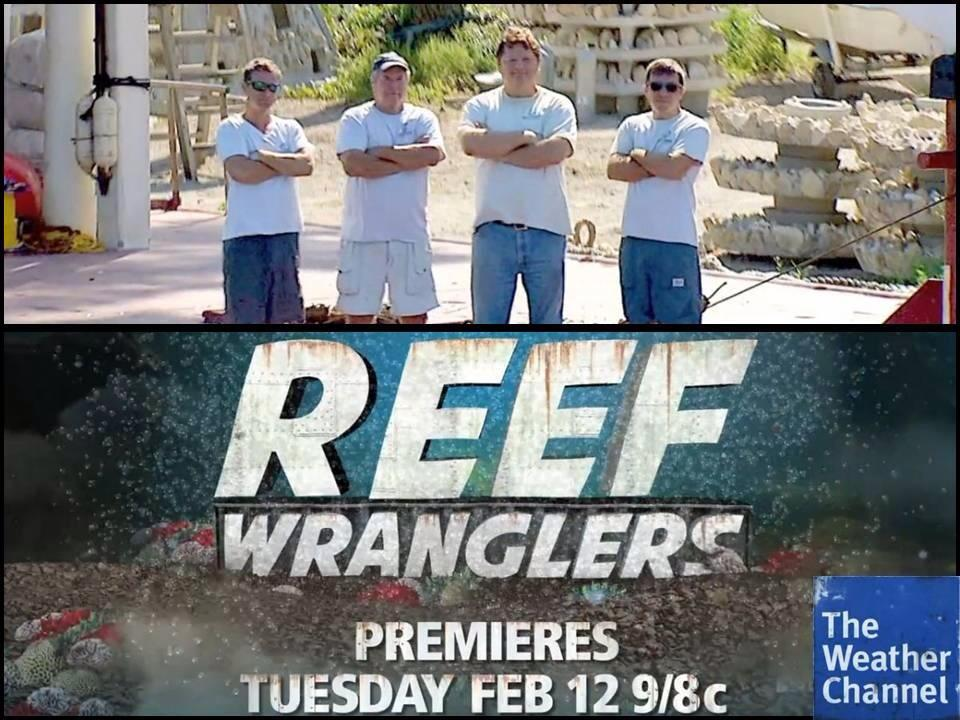 So Why Would Weather Channel Radically Reduce Weather Coverage?

All main stream media is in the hands of the global media empire, this includes The Weather Channel. The very same players that run the corporate/military/industrial/geoengineering complex, run the mainstream media.

The first step toward hiding the “elephant in the room” is to simply stop covering it. As the ongoing global geoengineering programs continue to decimate our planet, climate, and weather, there is less and less weather reporting on a channel whose very name would indicate otherwise. Weather Channel now does an actual segment on weather only about every third or fourth hour. The rest of their air time is now filled with an ever longer list of “reality shows”. The lack of actual weather coverage has become so frustrating for many, including myself, that I now often don’t even bother to look. Perhaps that is their goal. A list of the current Weather Channel reality shows is below 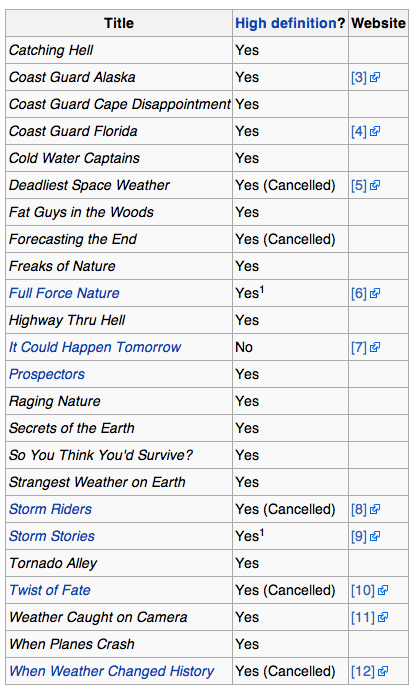 How Is The Weather Channel Spinning The Weather They Actually Report?  (Between All the Reality Shows)

The weather around the planet is spiraling rapidly out of control, fueled by the massive and completely unreported climate modification programs, SAG (stratospheric aerosol geoengineering) and SRM (solar radiation management). The powers behind the geoengineering programs have certainly known from the start of these weather modification experiments that it would be necessary for them to also completely control all major weather reporting agencies in order to help “cover the tracks” of the ongoing geoengineering programs. They do this by “spinning” weather coverage from every angle in order to defuse the concerns of the population as they are witness to ever increasing weather anomalies and catastrophes. They have come up with new terms like “mostly sunny” which generally means no natural clouds in the sky, but rather horizon to horizon jet particulate trails. The “high level haze” and/or “wispy” clouds are the hallmark of sprayed geoengineering particulate “clouds”.

“Heavy wet snow” is now a term commonly used by Weather Channel “forecasters” to describe the now all too common “artificial ice nucleation” snow storms that we increasingly see beginning at temperatures of 40, 45, and sometimes even 50 degrees Fahrenheit. As an “artificially nucleated” storm progresses, the temperatures typically drop considerably as the chemical nucleation process cools the surrounding air mass. One needs to take note of the temperatures as the first flakes fall. Cool air is dense and settles, this allows the climate engineers to create some low thermometer readings on the ground, but the layer of cold air is very shallow in comparison to historical cold air masses.

When TWC meteorologists show a radar screen and point to areas of rain that are “changing over” to snow, a red flag should go up. Rain does not “change over” to snow at temps far above freezing without a lot of aircraft sprayed chemical assistance being carried out above the storm systems. The Chinese stated on the record they were “ice nucleating” rain storms to create snow storms. Certainly we can assume US/NATO technology is much further advanced in comparison to the Chinese. Indeed NASA holds a patent for this exact purpose. The list of weather modification/geoengineering patents is long indeed.

It is now common to see radar images showing incredibly large areas of drifting rainless cloud cover around the globe. This is especially true over North America. Some of these drifting cloud banks are at times a thousand or more miles wide and several thousand miles long from west to east. Completely clear skies with no “aerosol” clouds are increasingly rare. This is especially true of “blue” skies. This again is anything but natural and is also a hallmark of geoengineered cloud cover. It is the expressed goal of numerous geoengineering patents to do exactly this, create vast regions of artificial cloud cover. This is precisely what we see overhead on so many days in recent years. Even when there are no obvious geoengineering “grid patterns” overhead, this does not mean aerosol spraying is not going on. Grey featureless skies often provide cover for extensive spraying above the haze. TWC of course does its best to convince us all this high level toxic haze is just “high clouds.” The weather graphics and imaging on TWC which show the “spray haze” makes their spin machine all the more convincing. 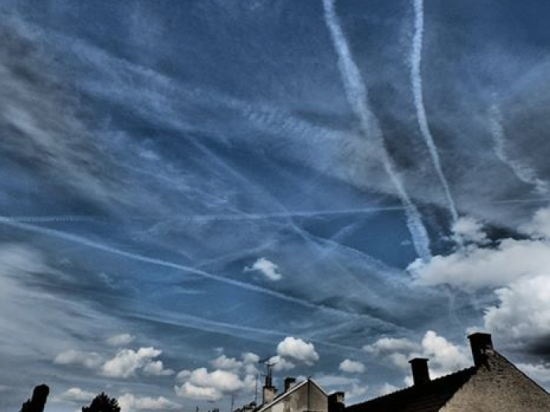 Keeping The Focus On What They Want You To See?

Though the land surface temperatures in the lower 48 were far above normal in 2012, shattering over 50,000 high temperature records so far that year, TWC now keeps the focus on the engineered cool downs. As we enter the fall/winter 2014 season, they will rant and rave about the engineered cold zones in some parts of the country that are already experiencing “heavy wet snow”. They neglect to give much or sometimes any coverage to the far above normal high temperature records which continue to virtually bake the Western US. The record heat in other countries is of course never covered either.

As winter approaches, the wild swings in weather will continue and likely worsen. This is again a hallmark of geoengineering/weather modification. Though TWC does occasionally mention the changing climate, you can bet they will never mention the fully deployed global geoengineering programs that are the major cause of the ongoing destruction our climate systems. The sold out “meteorologists” at TWC are tasked with the job of hiding the climate engineering insanity, not disclosing it.

So Who Owns The Weather Channel?

In the case of Bain Capitol, articles relating to corruption and involement with the establishment power structure are too numerous to list. On the Blackstone Group, the Rothschild’s name surfaces at the top of the list. The Roshschild’s name comes up again in regard to NBC universal. In the case of NBC universal, there are other players as well. The media giant Comcast, and then there is good old General Electric. One could go into the rabbit hole still further in regard to the top of the ownership chain, but the point should be clear. Money, power, and control are the usual goals for all the players involved here. Total ownership of all major weather forecasting organizations is part of that power structure.

For the record TWC recently purchased “Weather Underground”, the last of the independent reporting agencies. What a surprise. Speaking of which, they also own 50%  of Pelmorex Inc., the Canadian company that owns the Weather Network and Meteo Media which have a standing in Canada equivalent to the Weather Channel in the U.S.

Even NASA admits “jet trails” are causing climate change. 60 years of completely out of control experimentation on the atmosphere comes at an inconceivably high price. Though human activity has unarguably been very detrimental to the planet, this is not about Mr. Gore the hypocrite or his sham carbon credits, it’s about geoengineering and the agencies, like TWC, who help hide it.

Global geoengineering programs (which includes as many as 24 or more HAARP facilities around the globe) are decimating the climate, the weather, and the Earth as a whole. It has now become the role of TWC and other main stream weather reporting agencies to explain away the ever worsening and erratic climate and even more so to deny the reality of the ongoing geoengineering programs that are behind much of the deteriorating climate. The Weather Channel, like the rest of the main stream media, is now generally little more than a source of mass distraction. Legitimate reporting on weather and climate from TWC is increasingly being exchanged for reality shows, weather spin, and outright weather propaganda. Unless or until geoengieering is stopped, we won’t be seeing much in the way of “blue” skies, and we will all be witness to ever worsening weather extremes. Don’t count on The Weather Channel to finger geoengineering as a primary cause, their job is to hide the climate engineering crimes.

12 Responses to The Weather Channel Switches To Reality Shows