Truth And Lies, Obama’s Dire Warning About The Climate 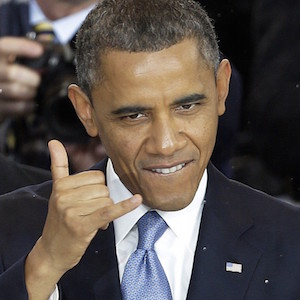 Just like so many of his predecessors, president Barack Obama has no trouble at all looking into the camera and deceiving populations around the world. His recent statement in the video below is only 3 minutes, but it is important to view and consider. The unfolding global climate unraveling is not as bad as Obama states, it's far worse and geoengineering is helping to fuel the fire. US military leaders have stated on the record that climate change is the greatest national security threat of all. Given the facts (and the statements by Obama), do citizens really believe that the global power structure would ask the public's permission before deploying all out climate engineering? Climate engineering and biological warfare are inseparable. All life has long since been forced to breath what the geoengineers are spraying into our skies. Obama made the following statement.

“The world’s top climate scientists are warning us that the changing climate already affects the air our kids breathe."

Yes, the air our children breathe is indeed being affected and the greatest single source of atmospheric particulates (mathematically) is from the highly toxic heavy metal and chemical fallout from climate engineering. Autism is known to be associated with aluminum exposure and aluminum is a primary element used in geoengineering aerosol spraying operations. How much has autism gone up in the last 40 years? Over 10,000% (from 1 in 5000 to 1 in 47). How bad will autism be in the next 10 years? According to researchers at MIT, 1 in 2 children will have autism by 2025. In regard to this astounding rise in autism, the MIT researchers unfortunately blame everything but the massive heavy metal fallout from climate engineering. Numerous lab tests prove that there is a mountain of heavy metal fallout (including aluminum) raining down on us all, it's is up to each of us to connect the dots.

Many that live in the completely engineered cool-down zone of the Eastern US may have trouble believing the planet is in total meltdown, but it is. Obama correctly pointed out that 2014 was the warmest year on record, and that 14 of the 15 hottest years measured have occurred since the start of this century. Obama also stated that the first three months of 2015 have been the hottest start to a year of any on record, this too is correct.  But what is the massive lie of omission? The ongoing criminal climate engineering programs that are tearing apart Earth's life support systems and completely contaminating the entire biosphere.  Global geoengineering programs must be exposed and halted if we are to have any chance of long term survival.
Dane Wigington
geoengineeringwatch.org

40 Responses to Truth And Lies, Obama’s Dire Warning About The Climate