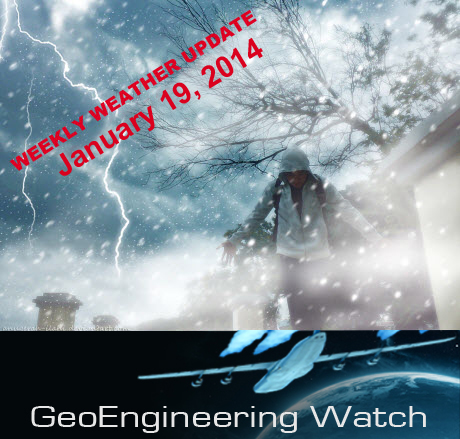 The weather over the lower 48 yet again is still in the same engineered track. Catastrophic drought producing high pressure dome over the entire Eastern Pacific with the ongoing parade of engineered snow events over parts of the Great lakes and the east. The climate engineers have set up a conveyor that delivers some cold air to some regions and they don’t seem willing to let it go no matter how much damage is done to the planet. Speaking of which, as the damage mounts and the geoengieering lump gets harder and harder to fit under the rug, Mr. Gore has now gone on the record with a statement that seems designed to distance himself from the geoengineering crimes. So what did Gore say??

“Geoengineering would be completely mad, utterly insane”. So what does his statement signify? Is Gore so in the dark that he does not know global geoengineering has long since been a reality.  I simply can not buy that one. What is likely is that Gore is beginning to comprehend that soon enough there will be no hiding the ongoing insanity of climate engineering and he just wants to try and distance himself from it. Perhaps Gore realizes that once the horrific crime of global geoengineering is known and the public starts to look for all those responsible, he does not want to be held accountable like the rest. Whatever the case, it is just more hypocrisy and disinformation from Gore. The paradox about Gore’s movie “An inconvenient truth” is this, yes the information in it was incorrect, but in exactly the opposite direction of what most people think. Our actual dilemma exponentially worse than anything Gore covered in his movie. Of course had he tried to tell the whole truth, no one would have listened at all, denial is just to great with the public at large and the American people in particular. In the end, Gore’s total hypocrisy in regard to his consumptive life style negated all he tried to do.On to more cheerful subjects, the bees and bats are dying off in Australia due to the ongoing record heat. The climate engineers pulled off a “cool down” at the tennis championships down under by pushing 110 degree highs back to 70 in a day, but at what cost? Such toxic “cool downs” do unquantifiable damage to the atmosphere and thus cause a much worsened overall warming in the end. What about the temps in the US? The west is still baking and burning while the east gets the benefit of the geoengineered cooling conveyor as mentioned in the beginning of this report. Huge temperature variances continue, Montana in the 50s, Minnesota will be in the single digits, the west in the mid 80s. Most of the spun reports from The Weather Channel talk about the snow that is again going to “pound” the east, (all three or for inches of it, is “pound the right word?) while not mentioning the Epic drought and heat that continues with no end in sight for the west.  Yet more main stream media coverage of more studies confirming that global geoengineering would cause horrific drought. Really? It WOULD cause drought? The truth is hard to see for a world that seems willingly blind. Every day that the global spraying goes on brings us closer to total biosphere collapse, those who chose to wake up an join the fight to save planet earth from geoengineering better do it now or they will not have the chance.