Why Is There A Drought In California? 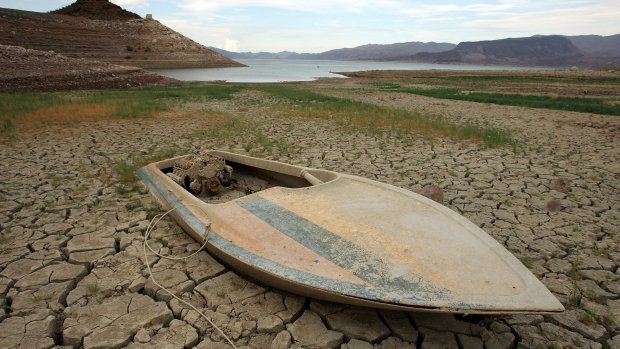 Do you know why we have had such severe weather throughout the U.S. in the past few years? Consider this: Since World War II the U.S. government has been using the entire population of this country as guinea pigs.

The government has directed the military to learn how to control the weather as a weapon of war. So for the past 50-60 years the U.S. military, specifically the Air force and Navy, have been learning how to do just that and they have gotten very good at it. It doesn’t matter that they are destroying the planet in the process and they are.

Before you go away thinking this “old guy” has gone off his rocker consider the following.

Today, California is in the worst drought in history. In the past 2-3 years we have had some very severe weather and weather related events throughout the entire U.S. Our drought is not the first. Hurricane Sandy did a 90 degree turn out in the Atlantic Ocean and crashed into the New Jersey coast. Hurricanes don’t normally make 90 degree turns.  There is no steering wheel directing their path of travel, until now. More on that later.

What about the severe tornado in Joplin, MO (rumor had it at the time it was caused by spraying off the southern California coast) followed by the very severe, record breaking, tornadoes in Oklahoma. Oh yes, there was a very severe ice storm in South Dakota just recently where over 100,000 cattle were killed. It was unexpected and unexplained as to what caused such an unusual storm.

What about the big one, the Polar Vortex, that just a few months ago came roaring down from the Arctic and froze the devil out of the eastern and southern part of the U.S. Record low freezing temperatures clear down into Florida. Why?

And now we have the worst drought in history in California while on the east coast they are expecting to be frozen out again. Actually, they are in the middle of a second Polar Vortex within 30 days. Doesn’t that seem strange to you? It sure seems improbable to me. The jet stream taking a second unheard of turn south, clear down to the gulf coast, allowing the arctic cold air to move down onto the eastern US again.

Let me share with you what I know. It’s called GeoEngineering. The U.S. government is spending millions of your taxpayer dollars to control the weather by doing a couple of things that are totally out of the ordinary.

First, they are spraying a number of different substances into the atmosphere on a daily basis.  Some of those substances are aluminum, barium, strontium and others that are generally unknown to the populace. That’s you and me.

The size of this crap is nanoparticles. Take a look at the period at the end of that last sentence and the particles are 1,000 times smaller. They are so small that they just float around up in the atmosphere, but being heavier than air they will eventually drift down to land on the ground or be inhaled by you and me and our children. They contaminate the water, soil and have been killing off wildlife on a record scale. I have learned there are over 200 extinctions a day taking place in our environment most due to the manmade sprayed particles. The stuff is killing off microbes in the soil which are being replaced by fungus (not good). The trees and bushes and plants in our forests are dying off in record numbers and not just from the drought effects. Look around you at how our forests are dying. Your government is allowing over 20,000,000 tons (ANNUALLY) of crap to be sprayed onto our earth. How can we expect any other result?

Can you imagine what is happening to us by breathing in these particles that are so small it is virtually impossible to filter them to keep them out? Have you considered why the rate of Autism and Alzheimer’s has increased to epidemic proportions in the past few years? Aluminum is one of the main culprits. Today 1 in 3 elderly adults will die with Alzheimer’s. That may not be the cause of their death, but they will still have Alzheimer’s. What about the 1 in 50 kids that has Autism? It used to be, not too long ago, 1 in 10,000. Doesn’t that make you stop and wonder?  It should.

How do we know this happening? Look Up! Every day you can see our government’s efforts to control the weather by watching the high flying jets leaving trails of the stuff they are spraying out of the aircraft. Many people refer to these trails as “contrails”, others refer to them as “chemtrails”. 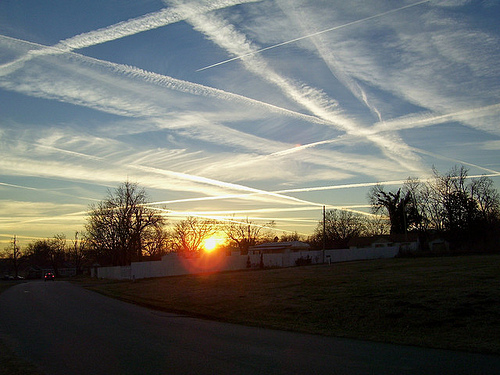 “Contrail” is short for Condensation Trail, moisture that comes out of a jet engine at higher altitudes condensing and leaving a visible trail. If that was true it would evaporate in a very short period of time and distance. What we actually see are trails that can be hundreds of miles long and after a while they spread out and form flat, wide clouds. Obviously, they are not “Contrails”.  They are part and parcel GeoEngineering efforts on the part of the government.

As I understand it the government’s story is they are attempting to “cool” the earth by forming clouds because of the threat caused by man made global warming. As it is turning out that is also a load of crap and they have found out it is not working. Actually, they are making it worse, but I believe there is more to the story.

What they have discovered in their experiments is if they spray their materials into the atmosphere over and around storm clouds they can stop the clouds from dropping their moisture or they can make rain or snow even if the temperature is 45 degrees. Also, their spray helps the atmosphere to become a very good conductor for very low frequency radio waves put out by their H.A.A.R.P. transmitters. This is another part of their experiment on us.

When I learned that H.A.A.R.P. can dramatically change the direction of the jet stream, for example, guide it down the coast of California to Mexico and then curve it east and back up to the north along the eastern border of California then some of the major wild weather we have been having starts to make more sense. 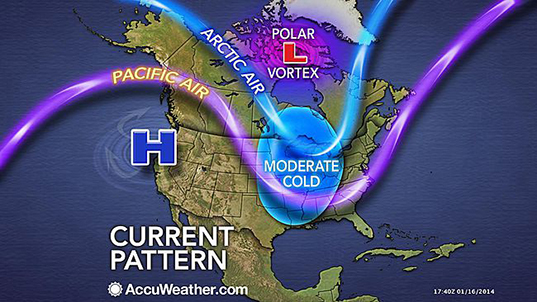 For example; I saw a diagram on the internet of the U.S. depicting the Polar Vortex and how it came down from the Arctic and covered over half of the country. The jet stream was depicted moving east from the California coast along the Canadian border to about the Dakotas and then it did a 90 degree turn south and went down to the Gulf coast, turned east again and  then turned back north along the eastern seaboard. It was very obvious the jet stream opened the door for the very cold air to move south. That diagram made me very suspicious of how the jet stream made such a dramatic move south at the time of the Polar Vortex.

H.A.A.R.P. is being used to keep the high pressure dome over California and consequently push us into the drought that we are presently experiencing. H.A.A.R.P. has the capability, in conjunction with the aerial spraying, of controlling exactly where the moisture they are stealing from California will drop and when, thus record severe snow and rain storms in areas in the Midwest and east, and very, very little rain in Northern California since April 2013. By the way, the steering wheel for Hurricane Sandy was H.A.A.R.P.

Next time you Look Up! wonder a bit about why the clouds don’t look like they used to.  When is the last time you can recall seeing a huge Cumulus cloud building up over the mountains because of the heat in the valley. We have been experiencing some pretty warm days. Where are those beautiful billowing clouds of the past?  All we see today are the remnants of the aerial spraying. Wake up people and start asking questions of your government. Why are they doing this to us? Stop it. We have a right to clean air. Leave the weather alone and mother nature will take care it. She did ok in the past.

17 Responses to Why Is There A Drought In California?