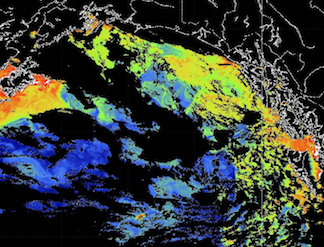 Man's war with nature is ultimately a war against himself. How many "interventions gone wrong" will have to occur before the lesson is finally learned by the human race? Should it come as a surprise that attempting to "fertilize the oceans" with industrial waste can only do immense and irreparable harm? 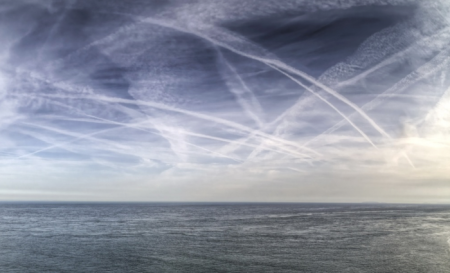 Massive aerosol spraying over Earth's oceans has been carried out for decades as part of the ongoing solar radiation management programs. Some of the elements being dispersed are also likely intended to stimulate "ocean fertilization".

The arrogance and insanity of industrialized society's propensity to interfere with nature is truly incomprehensible. The total ambivalence of the general population in regard to the mass destruction of the biosphere (being inflicted by anthropogenic activity and the military/industrial complex) is alarming and perplexing. What does it mean to be a "scientist" in a modern society of those who seek perpetual expansion on a finite world with finite resources? Unfortunately, in so many cases it means you try to find some way to justify the actions that your paymasters wish to implement. Finally, some of the insanity is being exposed. The excerpt below taken from a recent report is yet another glaring red flag that reflects the total folly of man's attempt to manipulate the planet's life support systems.

Scientists plumbing the depths of the central equatorial Pacific Ocean have found ancient sediments suggesting that one proposed way to mitigate climate warming—fertilizing the oceans with iron to produce more carbon-eating algae—may not necessarily work as envisioned.

Plants need trace amounts of iron to perform photosynthesis, but certain parts of the oceans lack it, and thus algae are scarce. Recent shipboard experiments have shown that when researchers dump iron particles into such areas, it can boost growth. The algae draw the greenhouse gas carbon dioxide from the air to help build their bodies, so fertilization on a large scale could, theoretically, reduce atmospheric CO2. Seafloor sediments show that during past ice ages, more iron-rich dust blew from chilly, barren landmasses into the oceans, apparently producing more algae in these areas and, presumably, a natural cooling effect. Some scientists believe that iron fertilization and a corresponding drop in CO2 is one reason why ice ages become icy and remain so. 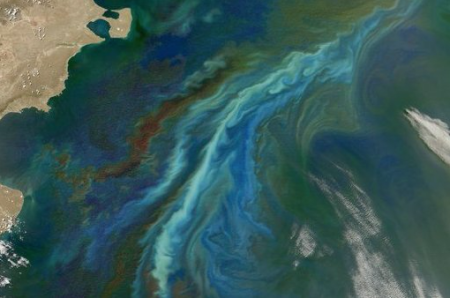 This file illustration photo, obtained from NASA, shows a massive phytoplankton bloom, as seen from a satellite. Organizers of a controversial ocean fertilization project off Canada's west coast said officials knew of the undertaking but did not stop it, and that it violated no laws.

But the researchers in the new study say that increased algae growth in one area can inhibit growth elsewhere. This is because ocean waters are always on the move, and algae also need other nutrients, such as nitrates and phosphates. Given heavy doses of iron, algae in one region may suck up all those other nutrients; by the time the water circulates elsewhere, it has little more to offer, and adding iron doesn’t do anything. The study appears today in the leading journal Nature.

“There’s only a limited amount of total nutrients in the oceans. So if there’s greater use in one area, it seems you’d have lesser concentrations in other areas,” said lead author Kassandra Costa, a doctoral student at Columbia University’s Lamont-Doherty Earth Observatory who led the analysis. “The basic message is, if you add to one place, you may subtract from another.”

Our oceans are super heating, acidifying, and dying at an astounding pace. Though there are countless anthropogenic causes, various forms of geoengineering (solar radiation management, marine layer albedo enhancement, ocean fertilization, etc.) are a major part of the equation in regard to causal factors. We are rapidly spiraling toward the "Canfield ocean" condition associated with mass extinction events in Earth's history. This time around the human race is holding the smoking gun as the planet is now warming 50 times faster than it should when coming our of an ice age. If the oceans die, we die. In spite of the fatal flaws of "ocean fertilization", our government has pushed this practice as a form of global warming mitigation (geoengineering). Will we continue to stand by and allow the power structure and the military industrial complex to conduct experiments of insanity on what is yet left of Earth's life support systems? Or will we make exposing and halting the ongoing geoengineering insanity our absolute top priority? The sand in the hourglass is rapidly running out, we must all make every day count in this critical battle.
DW