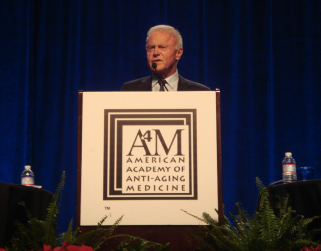 “Dr. Hans Kugler, PhD, is one of our most highly recognized researchers in the field of anti-aging medicine; his scientific presentations – supported by impeccable documentation – are eye-openers for professionals and lay-persons alike. As professor of chemistry at Roosevelt University in Chicago, where he also did extensive longevity research, Dr. Kugler not only puts things into perspective, but also provides a complete picture of the anti-aging and regenerative medical sciences that can be applied with successful results.” -Quote by Dr. Ronald Klatz, M.D., D.O. President, American Academy of Anti-Aging Medicine (A4M)

Alarming increase in serious illnesses in the US, along with a marked decrease in life expectancy, trend starting 16+ years ago

We, IAAM (International Academy of Anti-Aging Medicine), contacted a number of longevity experts to pinpoint the causes. Look at the graph in Bezruchka's paper: The US is dead-last!

Besides the established connection to the use of GMOs, there is also a definite increase in overall inflammation, clearly connected to Chemtrail/climate engineering spraying. For the latest like recent article in The Washington Post and GMO Industry Harassment against Researchers Exposed.

We are also exploring the connection between Chemtrail/climate engineering spraying and the – strangely – appearing and disappearing flu symptoms; we will cover this in the future.

Within the last 20 years there has been an alarming increase in serious illnesses in the US, along with a marked decrease in life expectancy (Bezruchka, 2012). The Centers for Disease Control and Prevention (CDC) estimates that the cost of diabetes and diabetes-related treatment was
approximately $116 billion dollars in 2007. Estimated costs related to obesity were $147 billion in 2008 and cardiovascular diseases and stroke were $475.3 billion in 2009. Health care expenditures in the US totaled 2.2 trillion dollars in 2007 (CDC, 2013a). The onset of serious illness is appearing in increasingly younger cohorts. The US leads the world in the increase in deaths due to neurological diseases between 1979-81 and 2004-06 for the 55-65 age group (Pritchard et al., 2013). These mental disorder deaths are more typical of the over 65 age group. There have been similar findings for obesity, asthma, behavior and learning problems, and chronic disease in children and young adults (Van Cleave et al., 2010). Type II diabetes in youth is being called an epidemic (Rosenbloom et al., 1999). The rate of chronic disease in the entire US population has been dramatically increasing with an estimated 25% of the US population suffering from multiple chronic diseases (Autoimmunity Research Foundation, 2012). These findings suggest environmental triggers rather than genetic or age-related causes.
During this same time period, there has been an exponential increase in the amount of glyphosate applied to food crops and in the percentage of GE food crops planted (Benbrook, 2012). We undertook a study to see if correlations existed between the rise of GE crops, the associated glyphosate use and the rise in chronic disease in the US.

34 Responses to Climate Engineering Connection To Alarming Increase In Serious Illness, A Prominent Scientist Speaks Out