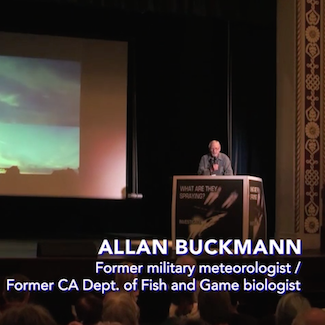 On August 14th, 2015, there was a major event in Northern California that was organized for the purpose of exposing and halting global climate engineering programs that are decimating our planet and the entire web of life. Numerous experts spoke out at this event including attorneys, former government scientists, a former defense industry technician, former military personnel, a prominent Northern California Neurologist, and a CEO for one of the largest environmental and engineering consulting firms in the world. Approximately 1000 people attended this event. One of the experts that spoke was Allan Buckmann. Allan is a former California Department of Fish and Game biologist with 38 years of experience. In addition Allan is a former US Air Force trained weather observer. His credentials for addressing the critical climate engineering issue are ideal and he makes his voice heard loudly and clearly in the testimony he gives below. The emcee for this important event was John B. Wells, radio host for the highly acclaimed "Caravan to Midnight" show. John works tirelessly toward exposing the truth for the common good. His participation in the Northern California event was of immense benefit to the cause of exposing geoengineering. My deepest appreciation to John, to all the speakers that participated and shared their knowledge, to each and every activist that contributed countless hours, and of course our gratitude to all those that attended the event. Individuals came from locations as far away as Valdez Alaska and St. Louis Missouri. Below is the first speaker to give testimony at the event.
Dane Wigington
geoengineeringwatch.org