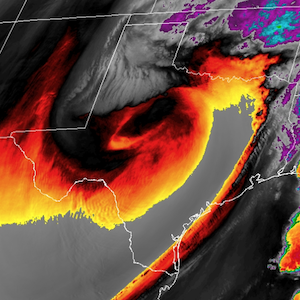 "Freak snowstorm" hits parts of Texas in spite of above freezing temperatures. Some of the chemically nucleated frozen material fell as far south as the Texas / Mexico border while most of the US was exceptionally warm for this time of the year. The moisture for the Texas "winter storm" originated from the record warm Gulf of Mexico and the record warm Gulf of California. Days earlier a highly sensationalized engineered winter event was carried out near the shores of the record warm Great Lakes. Geoengineering operations encompass much more than just lines in the sky. How blatant and devastating must climate engineering become before more take notice? How badly damaged must the environment be before more realize we can't survive without functional habitat? The latest installment of Global Alert News is below.