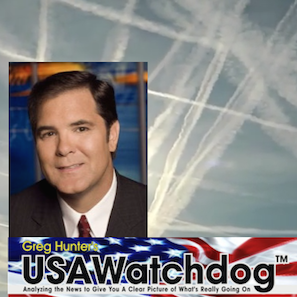 Greg Hunter has again covered the climate engineering issue with this new interview and article on the subject. Greg is a very respected and highly experienced news correspondent who has won many awards for his investigative reporting and journalism. His news site "USA Watchdog" has a huge following of people that appreciate Greg's tenacity for uncovering and exposing the truth on subjects and issues that mainstream media won't touch. Hunter's coverage of the climate engineering insanity is extremely helpful in the effort to bring this critical issue to light.
Dane Wigington
geoengineeringwatch.org

Dane Wigington, lead researcher for the global climate engineering informational website GeoengineeringWatch.org, says lawsuits are being prepared to get to the truth about what many call chemtrails. Wigington says, “It’s not just me. In fact, we have six US attorneys and two Canadian attorneys, and they are involved in this battle of their own accord because they realize their reality is disintegrating by the day. The climate engineering issue is the most significant environmental factor on the planet at this time. The filings are different in nature, and this will develop with their strategy. This is being done in a manner that will hopefully be a template for other states besides California to follow that template and also file suit. The heavy metal contamination is not arguable. It is there, and it’s not coming from China. It matches the climate engineering patents exactly. We have agencies whose job it is to disclose such a public health hazard and they are not disclosing, and there is liability from that –period. In the case of Northern California, we have spikes of aluminum in the Sacramento River, which is the drinking water for California, that is not being publicly acknowledged.”

Those doing the geoengineering, or solar radiation management, to combat so-called global warming would say they are saving the planet. Just the opposite, and Wigington goes on to say, “Those in the military who are involved in the program are being told exactly that, and this is imperative to try to sustain the planet’s life support system. In fact, with available data from 65 years of climate engineering, we know this is making the situation far worse, not better. We now have some in academia with the courage to start speaking out. Many are afraid about speaking about his issue, but we now have peer reviewed studies that say climate engineering can’t work. The trapping of the heat that comes from putting these particulates in the atmosphere and the shredding of the ozone layer, which is now in tatters, are all results of climate engineering. We don’t have the climate science community stating directly that this is happening or acknowledging it, but they are all stating on the record that it can’t work.”

Think this is some sort of myth? Wigington rebuts by saying, “We have film footage of these tankers spraying at altitude: military tankers, KC-10s, KC-135s and C-17 Globe Masters with up close video turning on and off (spray). There is no argument at this point; we have film footage of it happening. What most people don’t realize is they bought into the condensation trail lie. We know that this military type engine in these tankers is nearly incapable of producing a condensation trail. . . . Don’t believe anything I am saying, just look at the footage we have, and some of it has been taken by Air Force personnel. Why would we think that our government is not engaged in this when we have our government and governments around the globe stating emphatically that something has to be done immediately?  Would we really think our government would ask our permission for something that they categorize as a national security issue? Top military brass have stated on the record the biggest threat of all is climate change. Do you think they would ask our permission?”

What is the damage being done to humans? Wigington says, “Everything you would connect to heavy metal exposure is going off the charts–autism, Alzheimer’s, ALS and all sorts of neurological disorders.”

Wigington also contends, “Anything we do to alter the natural systems is a form of engineering the planet. Engineering is perhaps too dignified, but it alters the biosphere. Putting a hundred million tons of carbon in the air is a big problem. Cutting down forests is a big problem. Paving the planet is another big problem, but when you look at climate engineering and how it has kept the planet from responding to the damage done, that is a bigger problem than all of them combined. The sea levels are rising 10 times faster than what we are being told. Miami is pumping out sea water every high tide. The streets are flooding underneath every high tide. . . . Even a foot or two of sea level rise is cataclysmic for any costal habitation. The total sea level rise is beyond what most people think that is possible. In official studies, if Greenland melts in its entirety, that is 21 to 24 feet of sea level rise. If Antarctica melts, that is a 197 to 200 feet of sea level rise. It’s not going to happen overnight, but it is happening at exponential speed, and it only takes one or two feet to cause cataclysmic damage all over the globe. It is happening right now.”

Join Greg Hunter as he goes One-on-One with Dane Wigington of GeoengineeringWatch.org.

Wigington also told he that his inside sources say that the powers doing this will do anything to stop the public from finding out about the climate engineering and heavy metal particles coating the planet. Wigington says those same sources tell him that they are afraid of a widespread awaking about what is being done to the public and are extremely fearful there would be an out cry to prosecute and jail the people or, as the source said, “Demand them to be hung or shot by firing squad.”

Wigington also provides what he calls “a few short ‘indisputable spraying’ videos.” Here are three for you to view. You can click (here), (here) and (here).

Wigington also offers evidence that what many see crisscrossing the skies are NOT condensation trails, but actual spraying of microscopic heavy metal particles. Check it out for yourself by (clicking here).