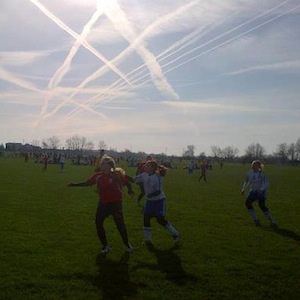 On June 24th, 2015, Dr. Steven Amato conducted an educational event to raise public awareness on the critical issue of global climate engineering and mainstream media's total lack of coverage on this dire issue. Dr. Amato has already authored an earlier article for geoengineeringwatch.org, our gratitude goes out to him for his continuing efforts to sound the alarm on the human health and environmental dangers posed by global geoengineering programs, Steven is a valuable ally in this battle.
Dane Wigington
geoengineeringwatch.org

A review of the specific effects of the two primary heavy metals, barium and aluminum was addressed. Besides being chemical desiccants that absorb atmospheric moisture, these two elemental metals are toxic to heart muscle and nerve tissue respectively, forming the backbone of the geoengineering chemical formula. Federal agencies cited as being involved include NASA, USAF, EPA DOE, NOAA, US Navy and others. A further literature search on barium and heart muscle disclosed exposure in the form of inhalation having the potential to give rise to a condition known as arrested ventricular systole – heart spasm. Barium was mentioned as a chemical agent that could wear down an enemy’s will to fight. Against this backdrop, chemical and biological weapons place individuals such as diabetics, the overweight and obese, and those experiencing immune suppression – anyone for that matter, as being at-risk for potential serious health consequences. If one is experiencing palpitations, shortness of breath or other symptoms such as difficulty breathing, lightheadedness or even fainting… they may be suffering the effects of “background noise” from the prolonged and daily exposure to these dangerous chemicals. Using an analogy of a thorn imbedded in the sole of your foot; if it’s not removed promptly, it will burrow deeply into the tissues, substantially increasing your risks for more serious and long-term problems. 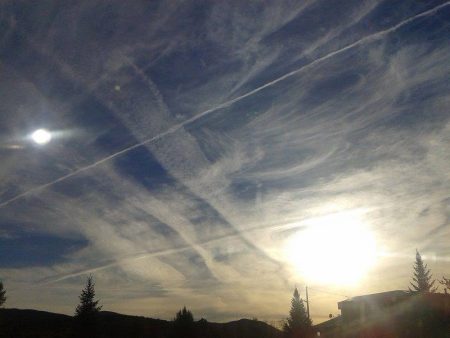 The time has come to exercise common sense and become proactive by taking precautionary steps to check for heavy metal poisoning. It starts by seeing your medical doctor or health care provider. Appropriate blood tests that can rule out “recent exposure” to barium and aluminum (heavy metal screening) should be discussed with your provider. Blood is target specific for recent exposure, and would necessarily be a good idea to test in close proximity to heavy atmospheric aerosol spraying activity over your region. Perform your online search using the keywords geo-engineering, solar radiation-management, stratospheric aerosol geoengineering, and weather modification; then refine using the keywords barium, aluminum, lead, arsenic and heavy metal toxicity or heavy metal poisoning. You can also perform a CDC (Centers for Disease Control) search. The following site discusses barium in-depth.

I was shocked when I learned my blood had 130 times the allowable exposure (reference range is zero) for barium, as well as high levels of toxic lead poisoning. I felt awful for weeks, experiencing constant stomach cramps, shortness of breath, palpitations, unexplained joint pains and fatigue. I also felt extremely dehydrated and my skin seemed to be aging literally overnight. My thirst was worse at night as jets could be heard overhead late and into the early morning hours during March of this year. I became aware that barium and aluminum were desiccant’s – chemicals capable of absorbing hundreds of times their weight in moisture. This made sense, since California is in the grips of a geo-engineered drought of epic proportions.
The number of people suffering heavy metal poisoning seems poised to rise significantly in the coming months and years unless this operation ceases and desists. Respiratory complaints have already risen to 3rd place from 8th on the list of conditions requiring medical care – this, within the last five years. Substantial numbers will face grave risks for increased chronic debilitating disease; in certain instances increased risks of mortality for millions of un-informed potential victims exists. Based on the literature, it would seem increasingly important to discuss with your doctor any potential side effects of prescription medications that can stimulate or sedate heart function. In light of the detrimental heavy metal side effects mentioned, an ounce of prevention could save your life.
The information in this article is educational in nature and based on open source – online literature searches. This material should not be construed as diagnostic or therapeutic. No cure, whether palliative or otherwise is intended.  Only your licensed health care practitioner can provide the appropriate diagnostic, prognostic, therapeutic treatment required.