The Death Of The Eastern Pacific 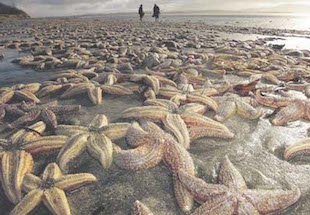 If the oceans die, we die. The seas are being assaulted from countless sources and directions. The damage has accumulated far past the breaking point, there will be no hiding the gravity of what is unfolding for much longer. The power structure will then become more dangerous than ever. Governments and mainstream media are not giving any significant coverage on the extremely rapid ocean die-off. What part has climate engineering played in this cataclysm? Plenty. Geoengineering over the Eastern Pacific (which is off the west coast of the US) is constant, satellite imagery confirms this fact. In addition to solar radiation management (SRM), ocean fertilization is likely also being carried out as part of the geoengineering programs. Ocean fertilization has many decimating effects including the creation of low oxygen "dead zones" which are rapidly increasing and expanding. Ocean acidity is fueled due to the Co2 absorption that is forced by the fertilization process. Upper level wind patterns are being radically altered by the ongoing climate engineering. This in turn alters ocean currents, this factor is contributing to the continued massive heat build up in the Eastern Pacific as the long expected and predicted el nino has not been allowed to develop. The heat stays bottled up in the seas with dire consequences. Climate engineering is also shredding the ozone layer which exposes plankton to deadly levels of UV radiation. Global plankton populations are crashing which means the foundation of the food chain is crumbling. Climate engineering is nothing short of an all out assault on the biosphere and it is certainly a major factor in the shocking die-off outlined in the article below. Get educated, arm yourself with credible data, and help to sound the alarm.
Dane Wigington
geoengineeringwatch.org

As of late January, the news reports were coming in hot and heavy. Baby sea lions were dying in droves. More than 15,000 of the pups were already lost due to starvation. And with each passing week, more than 100 of the emaciated, beleaguered, hopeless animals were washing up on California shores.

The pups staggered across beaches, wandered into vacant lots, or tottered, disoriented, along roadways. Refugees all to some unspeakable disaster. Orphans lost or abandoned by parents unable to provide them with even the most basic of sustenance.

Marine rescue centers, volunteer centers, and even animal shelters were inundated by a flood of desperate, dying animals. Their organs were shutting down. They could barely breathe or walk. The future generation of the more than 300,000 sea lions living along the US West Coast taking a severe blow from a deadly killer lurking in West Coast waters.

By late February more than 1000 sea lion pups had flooded the California Marine Mammal Center. Hundreds more found their way into local and ad-hoc shelters. The number was so great that all support systems for the animals were overwhelmed. Persons finding and seeking help for the dying pups were, more often than not, turned away due to lack of support and rescue resources.

It was like the scene out of some heart-wrenching sci-fi disaster movie. And everyone kept asking the same question — what could cause this?

This most recent spate of sea lion pup deaths and strandings comes after years of the same. News media currently reports the event in isolation — as if 2015 were the only year for such a thing to happen. But the truth is that this crisis has been ongoing now since at least 2013, with an earlier episode in 2009-2010 preceding the current chain of related events.

The 2013 event was so severe that in the end 70 percent of the 50,000 sea lion pups born that year had died. The 2014 event was rather less severe, accounting for ‘only’ twice the normal loss rate. But 2015 has so far been so deadly that even 2013’s staggering number of sea lion pup losses could be exceeded.

The multi-year event represents such a heavy blow to sea lions that marine organizations have declared the entire current young generation under threat of being wiped out.

But the story doesn’t stop at young sea lion deaths alone. From May through August of last summer, reports were flooding in of mass adult sea lion, otter, and bird deaths due to what appeared to be exposure to some form of toxin.

The animals would wash up on the beach or drop out of the sky. They would show signs of convulsions. Autopsies of the deceased animals revealed shrunken hippocampus, brain and heart lesions.

The same marine mammal center that is now taking in over 1,000 baby sea lion pups this summer took in 751 adults suffering from these signs of toxic poisoning. Simply put, the adults died this past summer and now the pups are starving.

Further down the food chain, creatures living in bottom water zones were also suffering and dying. Fishermen off Oregon had to go further and further afield to fill nets. Near shore fishing lines came up empty except for crabs scurrying up the lines as if in an attempt to escape from danger below.

And in 2013, thousands upon thousands of starfish began to turn to white clumps. A freakish instance of mass star fish death that continued inexorably through 2015.

The star fish would succumb to a strange wasting illness. An illness that would ultimately waste whole swaths of multiple starfish species (20 separate starfish species and millions of animals are now thought to be involved). Entire regions saw their starfish populations dwindle to zero. As with the mass sea lion deaths, marine researchers were both stunned and befuddled.

Perhaps even more disturbing is that the various species deaths just keep on coming — with no apparent end in sight.

Just off shore, a warm wind runs from south to north over the increasingly wasted waters. Warm airs born of warm waters, providing us with clues for the cause of this ongoing mass death event. For the seas off the US West Coast have reached record levels of warmth — a level of ocean surface heat that flared with the most recent El Nino in 2009 and 2010. A warming that has been building steadily ever since mortality events began their incessant march in 2013.

Now a broad swath of surface water ranging from 2-5 C above average blankets an entire oceanic zone from Alaska to Mexico.

Such excess heat may seem innocuous at first blush. A little extra warm water may seem pleasant to the casual observer. But what seems pleasant actually conceals a deadly threat.

Warm surface waters spreading over the ocean can serve as a kind of lid. The warm water prevents cooler water from upwelling toward the surface, mixing nutrients and refreshing the water’s oxygen levels. This shut down of overturning is a dangerous oceanic condition called stratification. And it can level a severe blow to almost all creatures along the marine food chain. Plankton become less productive. Low oxygen zones expand, killing the slow-moving bottom creatures all while driving the mobile fish to more productive waters. In the warmer waters, toxic algae blooms become more prevalent. Harmful microbes, which are culled during influxes of cold water, thrive and multiply, posing a disease threat to all marine species. Finally, in the deeper reaches off the coasts of Washington and Oregon, the already oxygen-poor zones, zones rife with methane from hydrate venting, begin producing a deadly seep of hydrogen sulfide gas.

The living sea has now become a killer. And all it took was a little extra added heat to lock west coast waters in an expanding zone of warm water and low oxygen marine mortality.

As a result we have the proliferation of the sea star wasting illness. An illness that would usually be contained by the seasonal influx of cooler waters. So too do we have instances of sea lion adults consuming fish, mullusks, and shellfish contaminated with domoic acid — a toxin produced by algae blooms in warm waters. And lastly, we have the overall stress on the food chain due to low oxygen and productivity which has driven sea lion food sources so far off shore that females are too exhausted after hunting to feed their pups.

However, the current pace of human warming is much more rapid than the warming periods that occurred at the ends of the ice ages. In addition, under business as usual human carbon emissions, the deadly, low-oxygen ocean zones are expected to expand, eventually covering the majority of the world ocean system. It’s a transition to a stratified ocean that will make the current west-coast die-off look like a minor prelude by comparison.

Eventually, if CO2e levels exceed 800-1000 parts per million, a transition to an even more deadly state called a Canfield Ocean is increasingly likely. And a Canfield Ocean is a powerful killing machine. Implicated all the previous hothouse extinctions, this killer, during the Permian Extinction, was likely primarily responsible for the deaths of 95 percent of species in the ocean and 70 percent of species on land. For the oceans eventually filled up with deadly toxins (primarily in the form of hydrogen sulfide gas) which then vented into the atmosphere.

It’s a very deadly ocean state we want to avoid at all costs. And we should view these very troubling instances of ocean species mortality along the North American West Coast as a warning to stop warming to oceans as swiftly as possible.

Surge in Marine Mammal Strandings on US West Coast

Sea Star Wasting Continues: Will King of the Rock Fall?

When the Stars all Go Out Along the Coast

37 Responses to The Death Of The Eastern Pacific